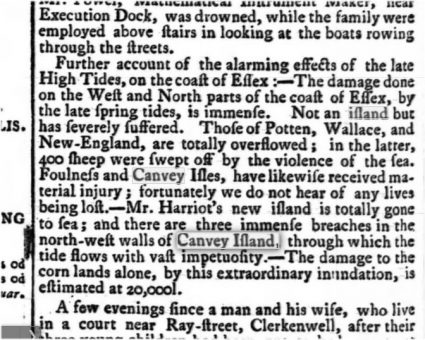 Further account of the alarming effects of the late High Tides, on the coast of Essex:- The damage done on the West and North parts of the coast of Essex, by the late spring tides, is immense. Not and island but has severely suffered.Those of Potten, Wallace and New-England, are totally overflowed; in the latter 400 sheep were swept off by the violence of the sea. Foulness and Canvey Isles, have likewise received material injury; fortunately we do not hear of any lives being lost. — Mr Harriot’s new island is totally gone to sea; and there are three immense breaches in the north-west walls of Canvey Island, through which the tide flows with vast impetuosity.–The damage to the cornfields alone, by extraordinary inundation, is estimated at £20,000.