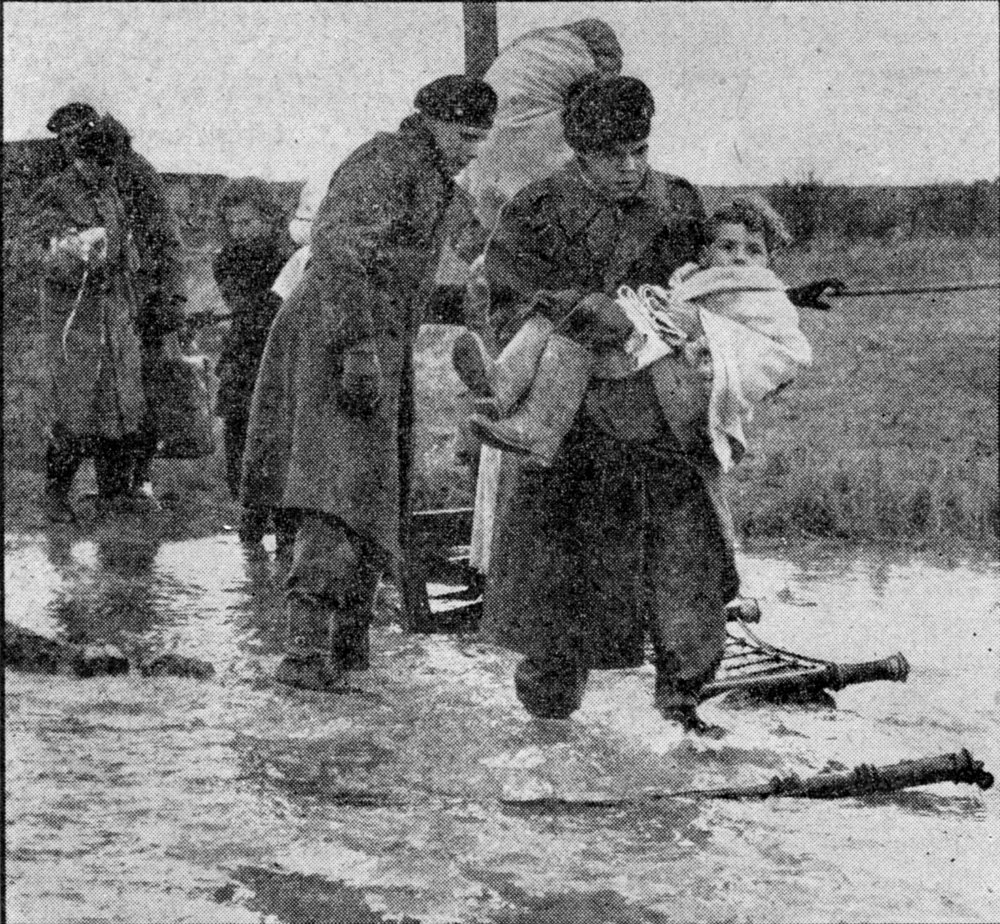 The bridge. A group of refugees from Canvey Island, worst hit of the flooded areas, moves out, escorted by soldiers. One soldier carries a small boy, well wrapped in blankets. Another steadies a rope rail over a bridge formed from a brass bedstead. The group left the island for Benfleet. There yesterday more than 12,000 refugees from Canvey Island were housed in emergency centres and private homes. Some of the 12,000 had lost all their belongings in the disaster.

Tonight, wheels awash to the axles, I drove down the river that, was once the High-street of Canvey. On each side water whipped into waves by the bitter north wind that today brought disaster to this island holiday town, lapped against the doors of shops and houses. Inside, thick with mud, floated chairs and tables, food from the larder, bedding and clothes left behind in today’s hasty evacua­tion. Outside, boxes, upturned boats, a dead chicken, part of a garden fence, float by.

Down the tree-lined avenues that branch off the High-street there is an unnatural quiet-even for a Sunday afternoon. Only the bonnet and roof of an abandoned car, the top of a garden hedge, show above the water that now surrounds the homes. Around the corner appears a row-boat; two firemen, wet and unshaven, numb with cold, are pulling at the oars. All day they have been nosing among the bun­galows and cottages calling out: ” Is there anyone inside? They have searched for bodies of people trapped as they slept, and rescued in­numerable cats, dogs, and cattle marooned by the rising water.

It has been a day of tragedy for the 15,000 people who had homes on this holiday island at the mouth of the Thames Estuary. Tonight only a few obstinately refused to leave. But they too, before the night is out, will pro­bably join the hundreds of families who are being given shelter in schools and church halls and people’s homes on the mainland. Police are patrolling the island warning those who stay : “It is likely to be worse tonight when the tide rises.”

Down on the seafront where the sea wall has been broken in 12 places, waves from the North Sea are already piling up again. Down the High-street, past the red pillar-box sticking out alone in the water, plods an old man, bare­footed, trousers rolled to his knees.

He has been back to his water­logged home to retrieve a suitcase of papers. They are his old-age pension books, his savings stamps, and his marriage certificate.

Past him like a ship plough­ing the waves roars a double-decker bus, one of hundreds rushed to the island from all over the county to help in the evacua­tion. Behind it follows a ten- ton Army lorry. The Essex Regiment, the R.A.S.C., the Artillery, and the Signals have been called in too. In the back a crowd of men and women huddle together as the lorry plunges through an extra-deep channel sending up spray at each side. A baby cries.

There is a flurry outside the red-brick council offices where police and Civil Defence have set up an emergency control. A boat­man has reported two bodies in the bedroom of a white – fronted bungalow round the corner.

The waterlogged High-street be­comes busy again. A tiny, rusty car crawls up; a man jumps out; plunges knee-deep through the water to a cot­tage. Huddled in the back of his car sits his mother, 72 year old Mrs Gertrude Gray, nursing 12-year-old Cumfy, her Pekingese. Beside her is a pathetic bundle of clothes. “We had to come back for some more of our things,” she says.

Out of another house walks a man, shoes, socks, and trousers soaked to the knees. From a carrier-bag comes the mew of a kitten. It is Mr. Arthur Hemmell who has been back to rescue their Persian, Sooty.

It is getting dark. Suddenly— to everybody’s surprise—the street lights come on, just as they do every night, all is quiet again. The wind whistles across the island, whipping the waves again. From somewhere comes the plain­tive cry of a hungry cat. But there is no one to help.

Earlier the cry would have been answered by Mr. Kenneth Adams, a superintendent of the Dumb Friends’ League, from Westcliff, who has driven his little grey van around the water-logged streets all day looking for pets abandoned in the flood. At the last count he had taken 30 dogs, two chickens, and a kitten back to the garage of his home in Hamlet Court-road, Westcliff.

A policeman plods through the water in thigh boots. He is one of the many hundreds who have been drafted in from towns all over the country. Back at the Ferrv Cafe near the Canvey Bridge, which links the island to the mainland, a man, his clothes soaked, huddles round a coke stove. “He’s just swum across three dikes.” says the cafe proprietor. “He was trapped in his house.” Water streams from the man’s jacket. His teeth chatter. He is too cold even to tell me his name. An ambulance draws up outside. Off come the man’s Wellington boots. A gallon of water pours on the Cafe floor. “You might empty that outside,” says the cafe man.

For everyone there was a hot meal tonight. It was cooked in the kitchens of the local schools. “Now we are waiting for the bil­leting officer to find everyone a bed,” says Mr. Don Jackson, South Benfleet British Legion chairman.