A Canvey mystery or ghostly tale, written by Graham Stevens’ great uncle, conjured up when mist and a red moon rise across the Ray and Canvey’s history is remembered in tales, very likely told by a roaring fire in the old Red Cow tavern that was one of the first welcoming signs at Canvey village when coming from the ferry. The Red Cow stood by the T-junction with Haven Road in front of the King Canute that has replaced it.

(Such was my assumption when I read the poem. Alas, I have assumed wrongly. Harold A. Thomas was actually the founder of the Temperance Society on Canvey Island, though whether he tapped into some old remembered folk tale, remains a mystery.)

At the time of the Census of 1881 Abraham Bird was the 62 year-old ‘Beer House Keeper and Farmer of 30 acres’ at the Red Cow Inn. He was born in Eastwood, his 58-year-old wife Honor Bird came from Prittlewell. Also born in Eastwood was the head at Chaflets Farm (Charfleet), 36-year-old John Bird, possibly a son? His 33-year-old wife came from Rayleigh, but all four of their children were born on the island. 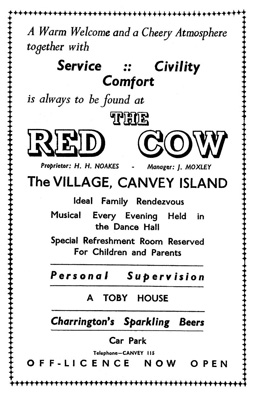 Old Jan van Ruyter kept his kine
Beside the Zuider Zee,
Until in Sixteen-sixty-nine
He sailed across the sea.

He sailed away across the sea,
He sailed for many a mile,
And so at last right glad was he
To come to Canvey Isle.

And there he farmed the new-won land
Behind the Dutchmen’s wall,
With meadows green on every hand
To feed his cows withal.

He brought Snow-white, his pretty cow,
Aboard his sailing ship,
And Snow-white was she from brow
To tail’s tasseled tip.

And when the voyage at last was done
A little calf had she;
And Snow-white loved her little one,
She loved it tenderly.

And everywhere that Snow-white went
Her little calf would go;
They were a picture of content,
They loved each other so.

Until one day-‘t was Michaelmas-
Old Jan did roughly say,
“Come up, Snow-white, ’tis time, my lass,
To take the calf away.”

And looked him through and through,
And never from a cow did rise
More pitiful a moo.

But Jan he hardened his old heart,
And drove the calf away.
Yet they would not be kept apart,
Together they would stay.

And when he thought his task was done,
Poor Snow-white gave a moo,
And back her little calf would run
Whatever Jan could do.

At last old Jan did something cruel,
In such a rage was he,
He seized upon a milking-stool
And broke poor Snow-white’s knee.

And then there happened-so ’tis said-
A thing most wonderful,
For Snow-white turned a flaming red,
And bellowed like a bull.

Old Jan he sank upon the ground
All quivering with fright;
He ne’er before this day had found
A cow turn red from white.

Red Snow-white gave him one more look
As on the ground he lay,
She bellowed till the hay-ricks shook,
Then slowly limped away.

She softly mooed a mellow moo
As through the field she led,
For e’en the calf now hardly knew
Her mother Snow-white red.

And so the red cow led the way,
The calf close by her side,
Until they came to where the Ray
Was flowing deep and wide.

They stumbled up the grassy bank
And down the other side,
And there without a sound they sank
Beneath the flowing tide.

It seemed that nothing was amiss.
They simply walked below,
And just what happened after this
We simply do not know.

But every year at Michaelmas,
Until van Ruyter died,
A very strange thing came to pass,
Which cannot be denied.

A mist came in from off the sea
Across the farmer’s land,
And there in awful mystery
He saw the Red Cow stand.

She stood upon her three sound legs ,
And plaintively she cried,
And then, as sure as eggs are eggs,
A calf ran to her side.

And limping painfully and slow
The Red Cow led the way,
And up the wall they both did go
And vanished in the Ray.

And afterwards all they could trace
Was hoof-marks in the mud,
With every fourth mark out of place,
And running red with blood.

And well van Ruiter understood
When he went to his stall,
Another calf had gone for good
Across the old sea-wall.

No use was door, or rope, or staff
Upon St Michael’s Day,
For every year a lovely calf
Was spirited away.

And though some dared to drag the Ray,
And some would scoff and laugh,
They have not found unto this day
The Red Cow or her calf.

But sea-mists blow across the strand
Beside the Zuyder Zee
At Michaelmas, and wrap the land
In awful mystery.

And farmers coming from the Fair
As sober as can be,
Are ready-so they say- to swear
That this is what they see:

For by its side an innocent
And pretty calf does go,-
They look a picture of content,
They love each other so.

At Michaelmas the moon is round,
And sometimes rises red,-
But keep it dark lest some be found
To doubt what I have said.

For still where’er the Dutchman dwells
Beside the Zuider Zee,
Vader repeats unto his pals
The tale of Snow-white’s knee:

And, seated by the milking-pail,
Moeder to kintje tells
The MORAL of the Red Cow’s tale-
“BE KIND TO ANIMELLES!” 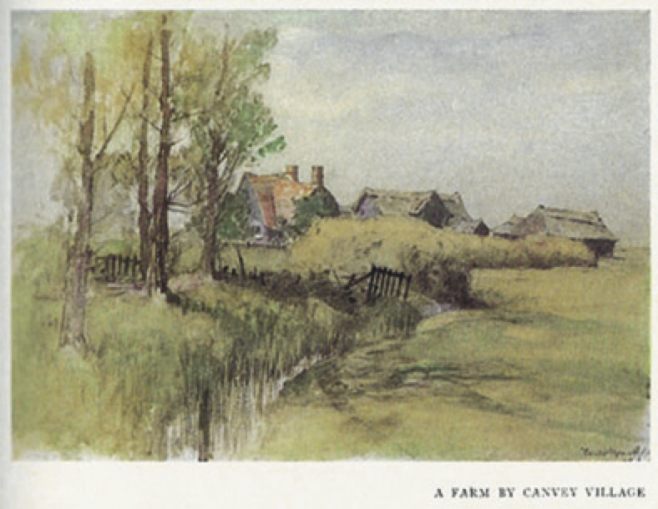 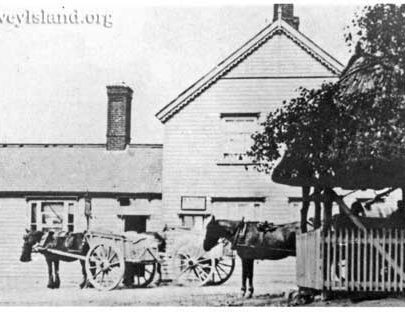 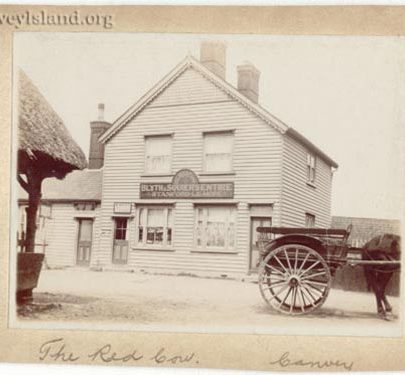 The Red Cow at Canvey Village

By Harold A. Thomas. Introduction by Robert Hallmann