You are here: HomenextArtsnextLiteraturenextVersenextKatie Mallett, Canvey PoetnextBuried History and other Canvey VersenextFlooded but not sunk

Flooded but not sunk 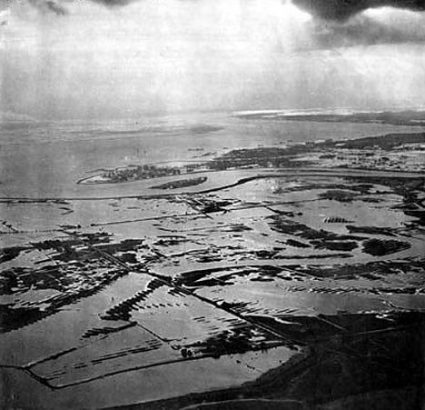 January chilled the River Thames,
Had blanched its summer blue to pewter grey,
Swirling into creeks, round grassy stems
It filled and overfilled each waterway.

Lithe as a writhing serpent’s scales and skin
It crushed the tidal barriers, to break
The Island’s bones, and finally rushed in,
Bringing death and chaos in its wake.

Then at last the river loosed its grasp,
Slunk away to leave a sea of mud,
Deadly as the poison of an asp
To dryland plants, too victims of the flood.

But, human spirit cannot be suppressed
Residents returned to Canvey’s plain,
To put the sea defences to the test,
And pray the Island will not flood again.