Photos of the Launch

A WARM CANVEY WELCOME: THE NEW HISTORY WEBSITE – AN OPEN LETTER TO THE ECHO AND EVERYONE

Maybe it’s because it is an island, but Canvey people seem to have an edge when it comes to remembering and cherishing their place of birth or abode. We hear a lot about hooliganism, boy racers and antisocial despoilers, that it almost comes as a surprise that there is another side to the island. 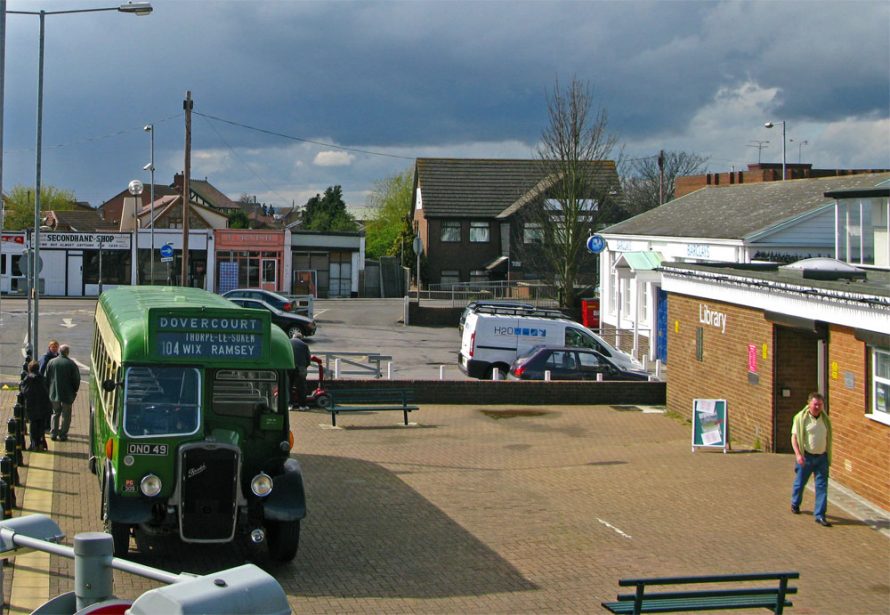 Castle Point Bus Museum kindly provided Buses on the Day. In the background you can see the vintage Lakeside Corner Shopping Parade

We have already experienced the enthusiasm of walking about the place, with knowledgeable people elucidating on sites and memories as part of Lucy Harrison’s ‘Work of Art’. On Saturday it was the inauguration of a new ‘History’ website that drew the crowds, this time to the library, where anybody can turn up and deposit photos and/or memories or anything to do with Canvey in a historical connection. The County Council was behind it and the Essex Record Office and the Library Service, as well as Castle Point Council – the mayoress found time to press the inaugural button and dignitaries showed interest. And the Lottery supplied the funding. 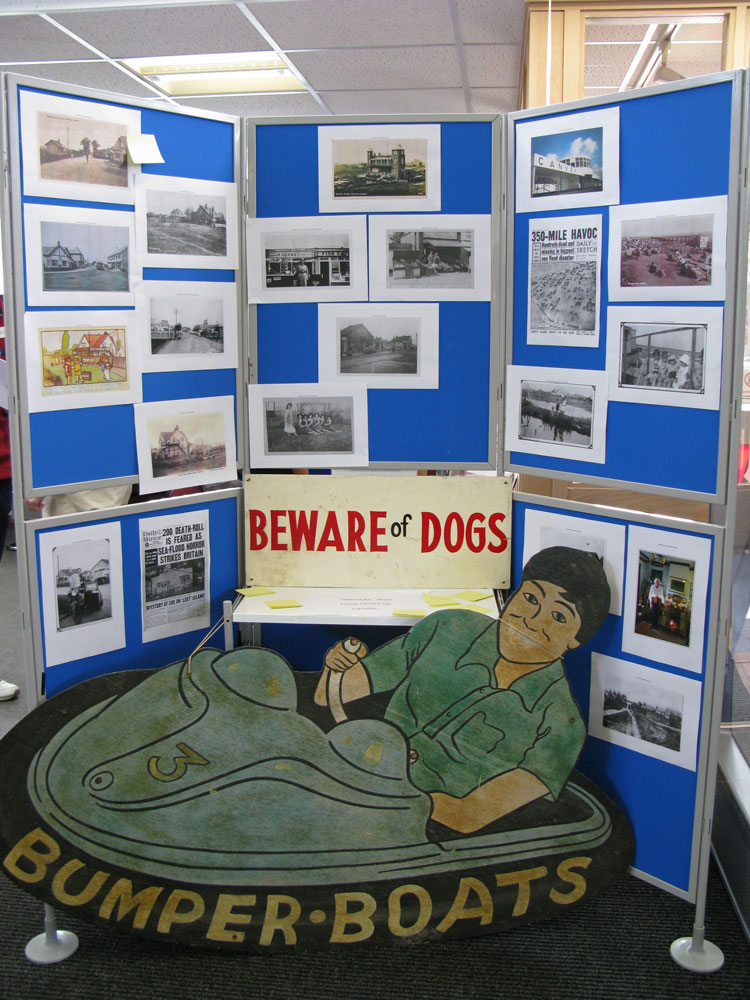 Canvey folk spoke about their island and studied the images on exhibit. I noticed quite a few younger people, too. The surprise was the many visitors, even from London, people who have family connections to the island or remember it from their childhood and the holidays they spent there.

Because Canvey’s development started and grew at the height of the popularity of postcards, there is a lot of visual memory about, and just like neighbouring Benfleet with St Mary’s church and the Downs, there were photographers and artists who captured the images for us. (I was asked to put up my stall and I even sold a book or two as a bonus of receiving many more contacts for stories and memories.) 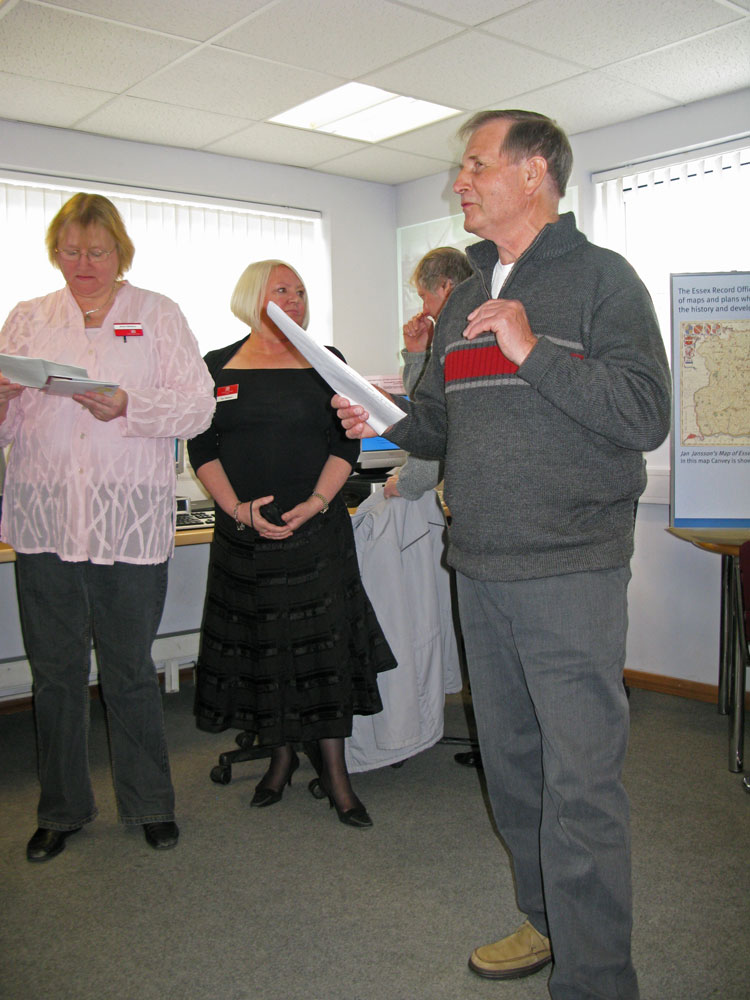 Of course, such a website does not grow in a vacuum, it was first conceived when the wanton destruction of the concrete barge at Canvey Point upset a lot of people, even ex-pats around the world. One in particular, Dave Bullock, born on the island but not living there, turned that disgust into a website for others to release steam and opinions. 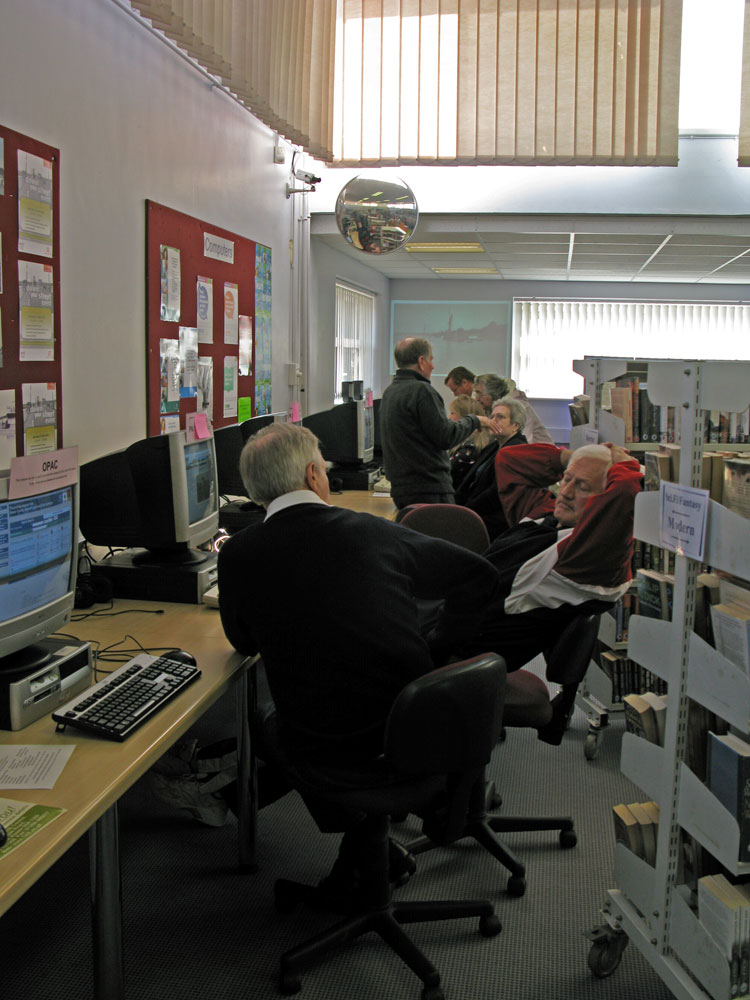 We had visitors from neighbouring historical groups

The site outgrew its original intention and extended into a very active and well visited history site and then a Forum that was visited with contributions from all around the world – Australia, US and Canada, etc. So hopefully the success of the new site is assured.

The councils and organisations would like to encourage similar sites in South Benfleet and Hadleigh, but are there the people of dedication to the past (and with the knowledge, though I am assured it’s technically easy) to put time and effort into such worthwhile collection systems? Something to leave for the future?

With so much destruction and altering and additions, South Benfleet deserves to have all that history kept alive and so do Hadleigh and Thundersley. Family photos and histories welcomed, people remembered. But the sites would not be open to just anyone. Every contribution has to be vetted by local editors for suitability, to sort out spam and advertising (and all those adverts for Viagra)…

Click on the Photos below to view the opening event…. 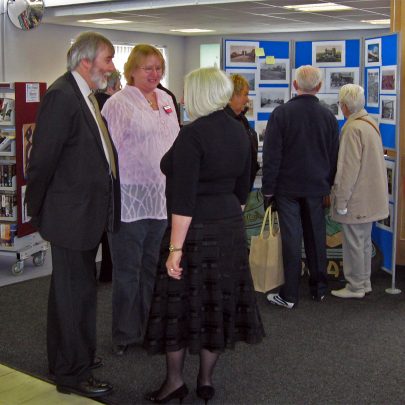 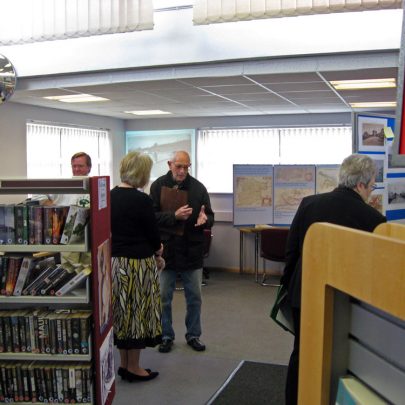 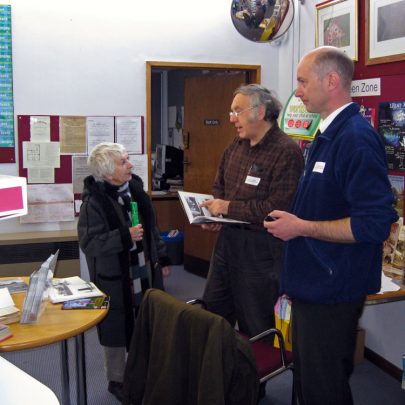 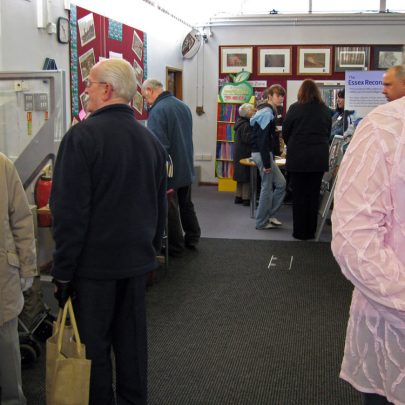 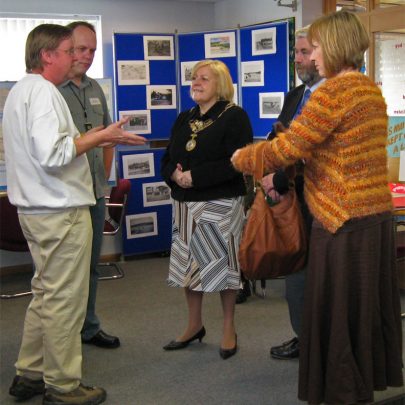 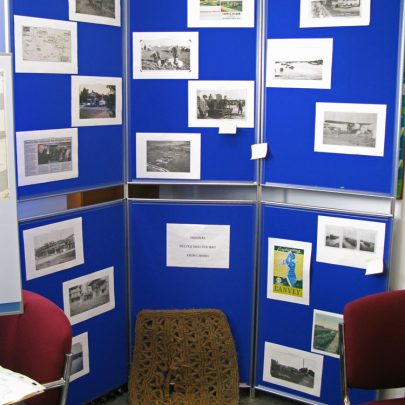 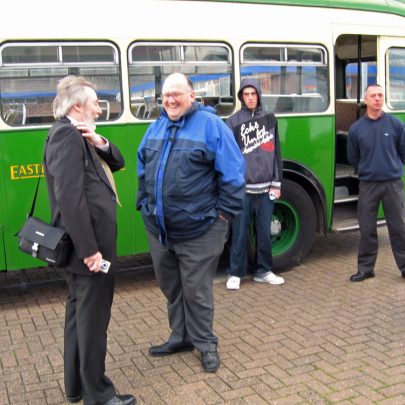 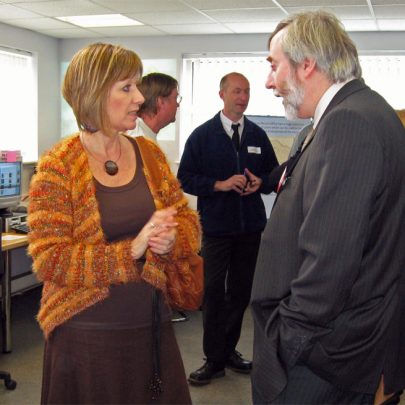 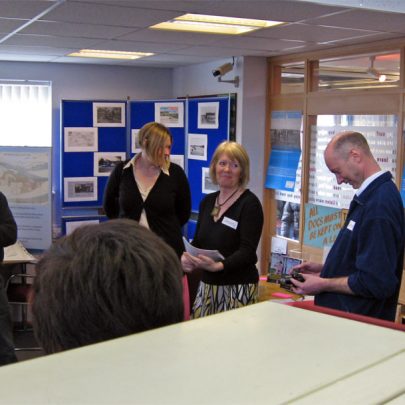 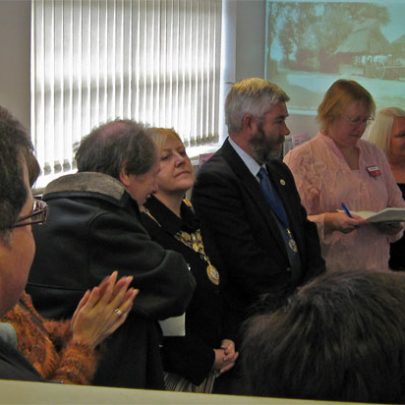 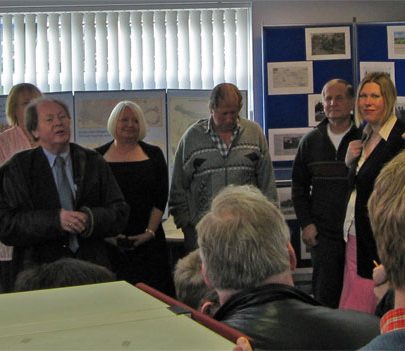 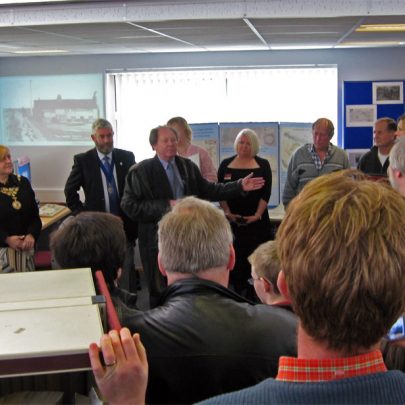 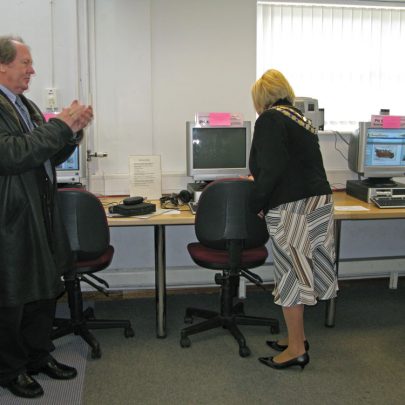 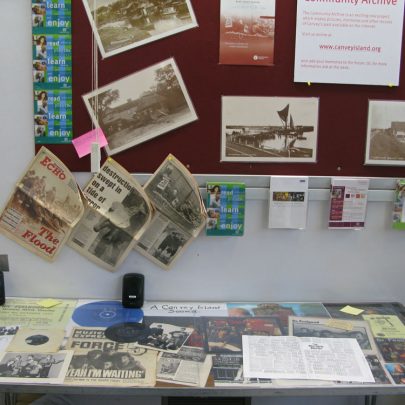 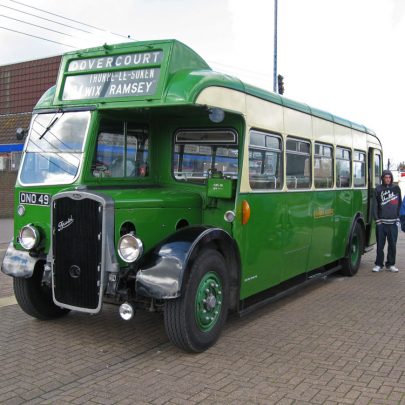 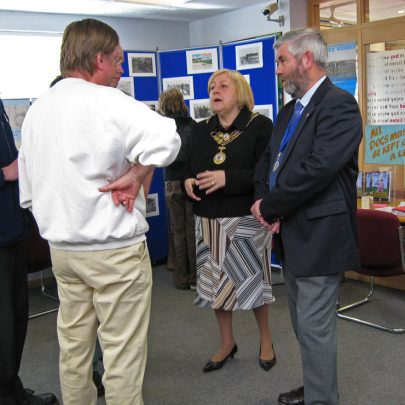