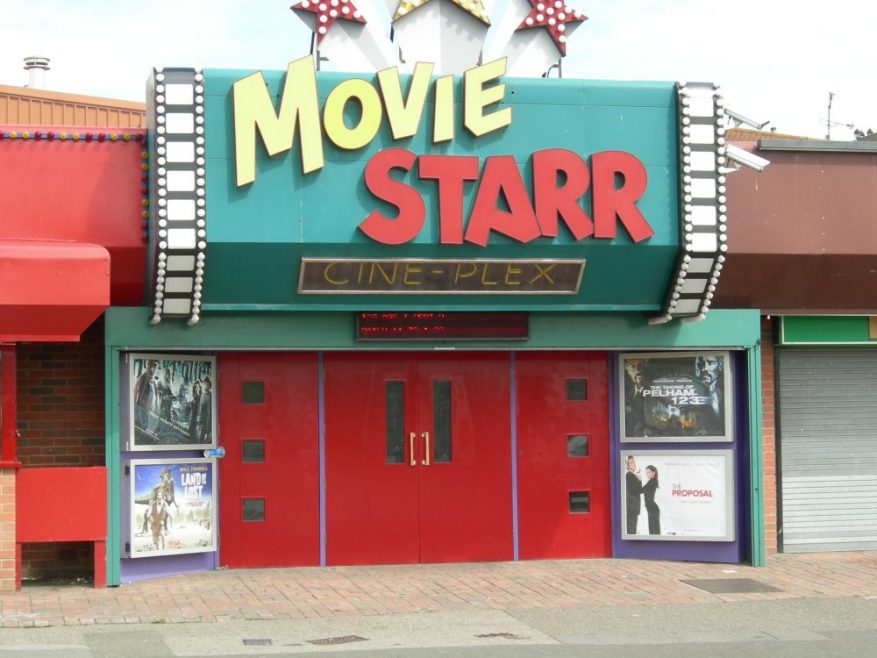 The entrance to the cine plex

In July of 1997, work began at Eastern Esplanade to create a cinema for the island again- one of the most expensive investments for years! It involved a rebuild of the area fronting the seafront, and a complete new build of the rest of the auditorium- Local councillors Ray Howard and Denis Williams officially opened the Movie Starr Cineplex on the 18th of March, 1998.

The cinema had four screens. Numbers 1, 2, and 3 were equipped with Dolby Digital sound systems, while 4 has Dolby SR (Spectral Recording). Later, 4 was upgraded to Dolby Digital.

All the screens are operated from one central projection/technical suite, fitted with all brand new equipment.
The suite is equipped with four Century 35mm projectors with long-play platters (all made by the Strong company in the USA), which can each handle two film programmes including the trailers and adverts, and are all interchangeable with the other projectors. They are capable of showing 1.85: 1 widescreen, and 2.35:1 cinemascope ratios.

All sound processing, amplification, and lighting control is housed in each projector console, with a 1600 watt xenon lamp providing the exact screen illumination level to show the film at its best level of brightness (i.e. the optimum contrast, colour, and density of the film print).

The sound amplification is capable of delivering 1800 watts of power to the JBL speaker system (22 in each auditorium) and the screen is made of a special reflective surface, with many thousands of tiny perforations to let the sound through (there are also speakers positioned directly behind the screen).

The 35mm cine film runs through the projector at 24 frames (single pictures) per second (which is 90 feet per minute), and projects onto the screen using optic lenses made by Isco (in Germany).

A viewer actually sees each frame twice- and spends exactly 1/2 the time in total darkness! It is the viewer’s brain’s persistence of vision which makes them see the frames as a continuous moving picture- and this perception, plus the very high quality soundtrack, help to realistically engage the watcher in a story that can be set in any time, at any place, and anywhere in the universe!

On any day of the week, Movie Starr shows over 100,000 feet of film… or a million and a half separate pictures!

When the films, which come in cans, are delivered to the projectionist all the reels are assembled in their proper running sequence to make up the movie ready for showing. All the Academy leaders and tails from each roll are removed, the trailers and adverts are spliced to the start of the movie, and all the parts are then joined together so all the rolls are combined into one big one, which can run through the projector as one length without interruption.

When the film’s showing schedule at the cinema has ended, the big roll is broken down to its single reels again. With the leaders re-attached, they are stored in their cans ready to go back to the film distributor (which may re-distribute, archive, or recycle it).