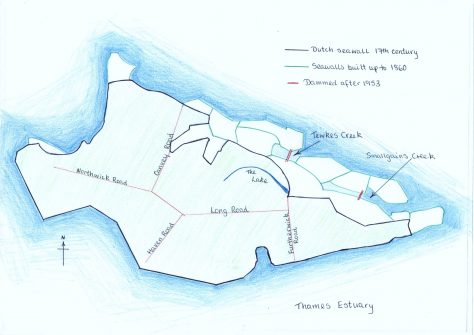 Once upon a time there was a stretch of marsh on the north side of the Thames Estuary. The only bit of use it had was mainly by flocks of sheep. One day in the 17th century someone had the bright idea of putting a wall round it to protect it from flooding and to make the dry land within useful. And so it came to pass that the area known as Canvey became an island and neither the sheep nor the people got wet feet at high tide any longer. It became a green and pleasant area, if you ignored the mozzies, and continued to develop into the Island we now call home. 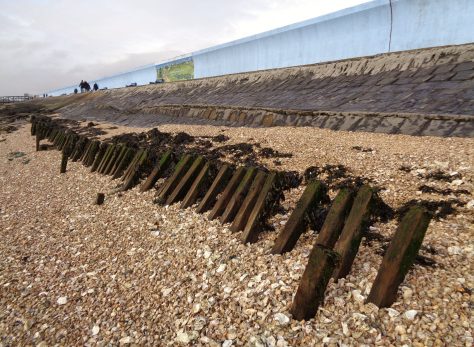 Take a walk at low tide from the Point to Thorney Bay or if you like being contrary from Thorney Bay to the Point and you can trace the foundations of the Dutch sea wall. What’s still left of it are the oak piles driven into the mud which were then in-filled with chalk and rag stone to provide a firm base on which to build the wall. This wall was a simple mound structure, grassed on the top and landward side and faced with stone along the side fronting the estuary where the most wave action takes place. The other lengths of sea wall along the northern and western sides of the Island were just grassed mounds.

Take another wander to Mitchell’s Avenue/ Smallgains Avenue area and you can see another long stretch of the original seawall which was built along Smallgains Creek.

What’s now used for football, dog walking and recreation used to be home to houseboats and other craft. That was pre-1953. After the Great Flood the mouth of the creek was dammed by the newly constructed seawall in 1955. 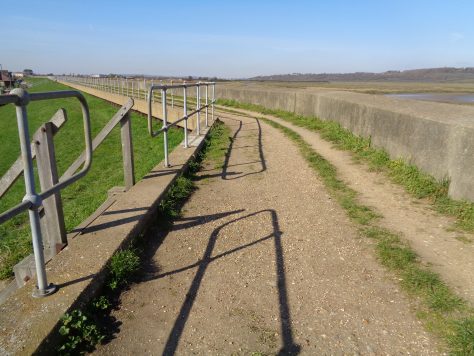 The railings are on top of the old wall with the new wall on right.

If you get overcome by total seawall ‘nerdiness’ you can go to Tewkes Creek. Look west and you can see the old grassed wall to the north of the rugby club field. Turn east and walk along Kellington Road towards the Knightswick pumping station and you’ll be able to compare it with the 1953 wall as well as the latest one built in the 1980’s. Climb the steps to take a look at the view. You’re now standing on top of the 1953 seawall whilst leaning on the 1980’s version! Hopefully the height of this ‘new’ seawall should assure you that the Island is well protected from the salty sea.

The flood barrier at Benfleet Creek.

Take a walk in a westerly direction from Waterside Farm, currently the Council Recycling Centre, and you’ll see the original grassy seawall. You’ll notice how high it is, or perhaps, we should say how low it is! The seawall along the north and west shores hasn’t been raised like elsewhere on the Island because that section is protected by two barriers, one at Benfleet Creek and the other at East Creek. In exceptionally high tides these barriers are closed so the tide can’t overtop the old walls. 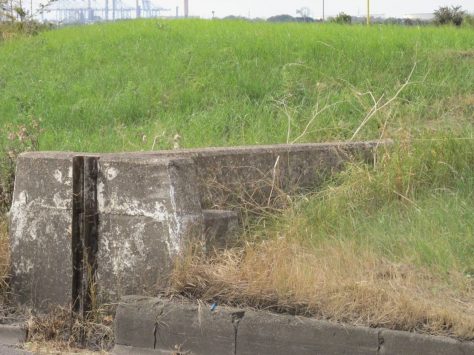 Metal slots for boards for the old flood barrier across the road.

Compare the Benfleet barrier with the previous flood barrier which consisted of some boards slotted into ironwork on top of the seawall either side of the road at Waterside Farm. 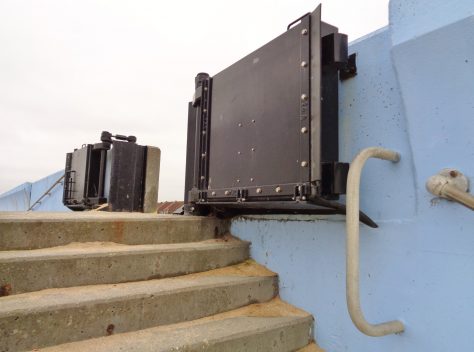 Flood gates at the seafront.

Islanders, visitors and maintenance crews still need access to the seaward side of the wall, so along the seafront there are robust metal flood gates and elsewhere there are steps which go up and over the wall. In the case of the section to the north of the Golf Course, the gates there remain permanently closed. Originally in the late 1980s and 90s most of the flood gates would be closed at the end of October and reopened in March with just a handful open for access. This meant that if you didn’t want to walk all the way to the next open gate, you had to develop a potentially eye-watering knack of hoisting yourself onto the gate and swinging your legs over! These days, with cutting edge technology developments in weather prediction and communications technology, the Environment Agency only closes the gates if it has strong evidence of an exceptionally high tide. So, fellow Islanders, we can sleep peacefully in our beds. 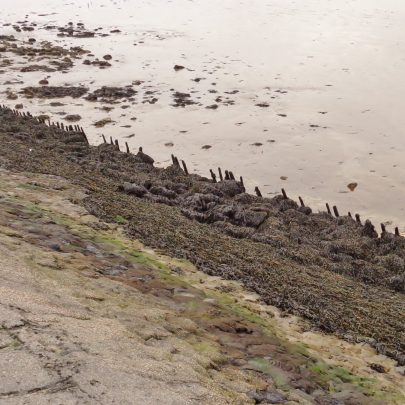 Remnants of the old Dutch wall. 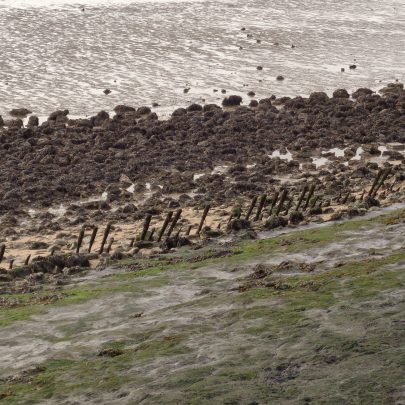 Palings from the old Dutch seawall with possibly scattered Ragstone infill beyond them. 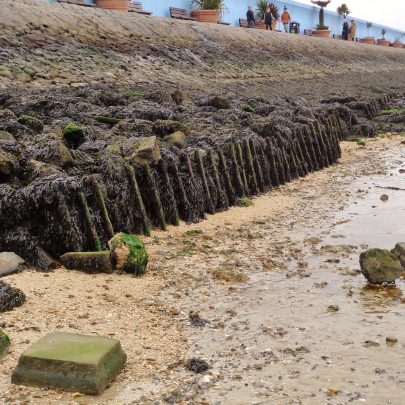 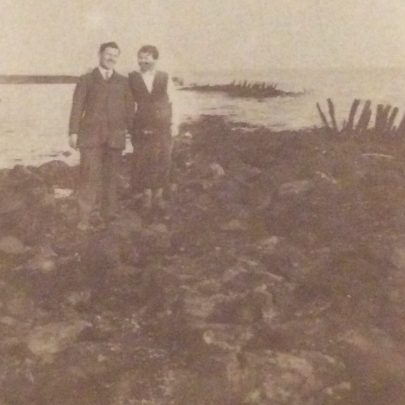 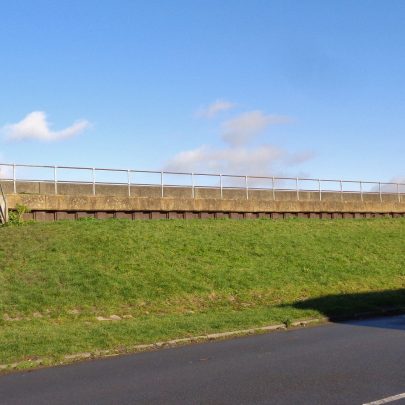 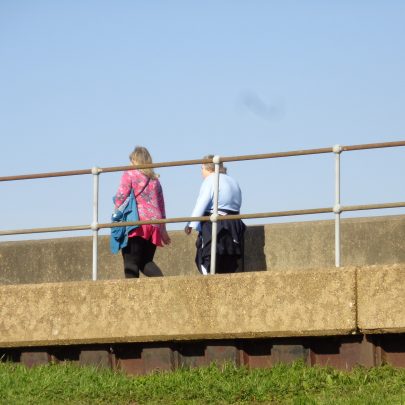 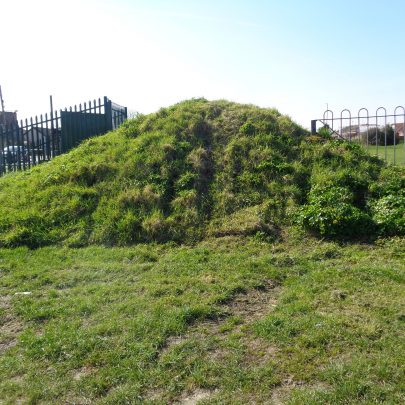 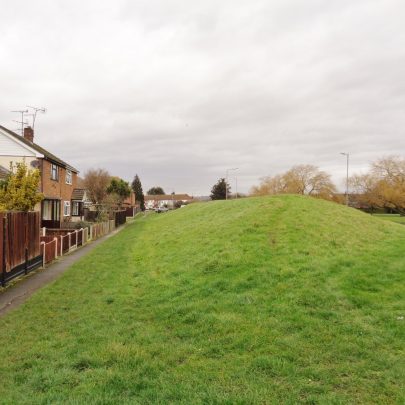 A section of old wall beside Mitchells Ave. 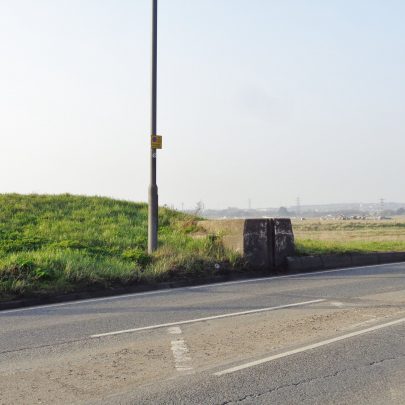 What's left of the old flood barrier at Waterside Farm. 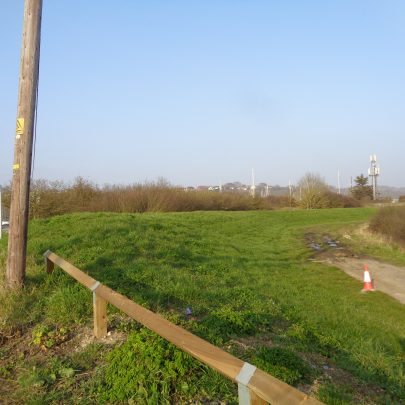 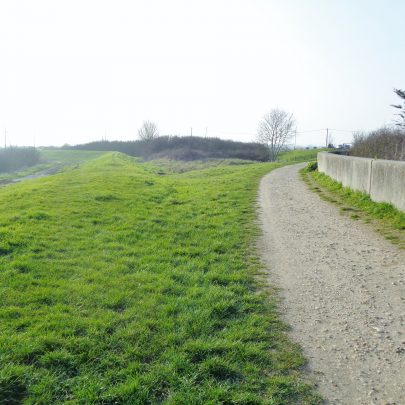 The old wall bears left to Waterside Farm, the new bears right to the Benfleet Barrier. 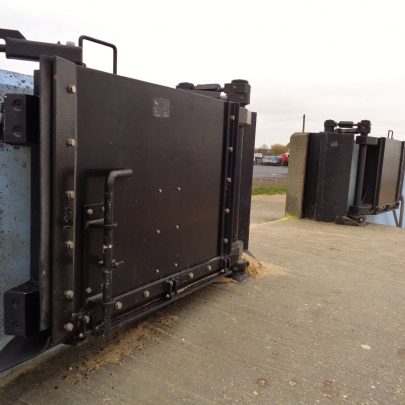 Flood gates at the Labworth. 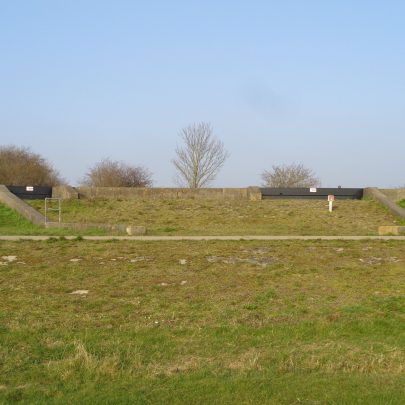 Flood gates on the northern section of the seawall at the golf course.