75th Anniversary of the B17 Flying Fortress Collision

After months of hard work it was great to greet our friends from across the pond, Noel, Tom, Barbara and Jeanne, to the Commemoration of the 75th Anniversary of the mid-air collision between two B17 Flying Fortresses in 1944. 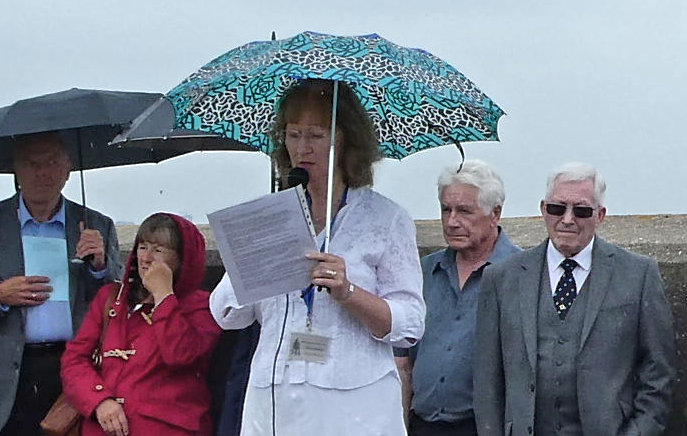 Janet Walden, Chair of the Canvey Community Archive, welcomes everyone to the Commemoration of the 75th Anniversary

Not everything went according to plan. We had hoped for a flypast by the US Air Force but we did not get that but we did get a visit from a very nice US pilot Captain Rebecca Bairds based in Lakenheath. A flypast by local planes was also off the menu as the weather closed in. All flights were grounded due to the low cloud. Rain was threatening and indeed fell through part of the service. But Jeanne Cronis Campbell, daughter of Theo Chronolopolis, the only survivor of the Kent plane said to me “its not rain, its tears”. What a lovely thought.

The actual event took place at the Archive’s information board and memorial benches at the point which is now a focal point for the families of the crewmen. The event was organised by the Canvey Community Archive working with the Canvey Town Council and the Bay Museum.

A large crowd gathered there at 2.30 where our Chair Janet Walden introduced Rev Terry Brown who conducted a short service of remembrance to all the crew members of both planes. Geoff Burke, one of the researchers, read out the names of those who died, were missing or survived. The service was followed by the song ‘That Old Black Magic’ sung by Colin Wyatt. Why that song? Louis Schulte, who was killed in the crash, would sing it as the planes passed over the coast after missions so they then knew they were safe.

Gary Foulger, local historian, who 46 years ago helped excavate the crash site of Heavenly Body 2, the plane that crashed off Canvey Point, spoke about his life long search for information about what happened that day. Gary was followed by members of the crews’ families. Noel Tognazzini is the nephew of Cecil Tognazzini who is one of the missing and crew member of the plane that crashed off All Hallows. This was Noel’s third visit to Canvey Island. Tom Schulte came next. Tom is the nephew of Louis Schulte, who was killed. Louis was a member of Heavenly Body 2. This was Tom’s second visit. Last came Barbara Tarbox. Barbara is the daughter of Richard (Dick) Andrews. Dick was a member of the crew of Heavenly Body 2 and survived. He is the only one of the survivors still alive today. This was Barbara’s third visit. We first met her for the 70th anniversary memorial service at St Nicholas in 2014. I personally had been corresponding with her father for several years before that. Last in this part of the event was Captain Rebecca Bairds of the USAF who said a few words on behalf of the airmen of today.

In the final section of the event Town Mayor Alan Acott on behalf of the Town Council thanked everyone for attending. Ray Howard MBE said a few words then, on behalf of the Canvey Community Archive, presented a photo book to Gary Foulger. The book represented his 46 year B17 quest. Just before Janet Walden closed the event she called upon members of Canvey’s 5th Air Scouts to make a presentation of small mementos from Canvey Community Archive to members of the families. 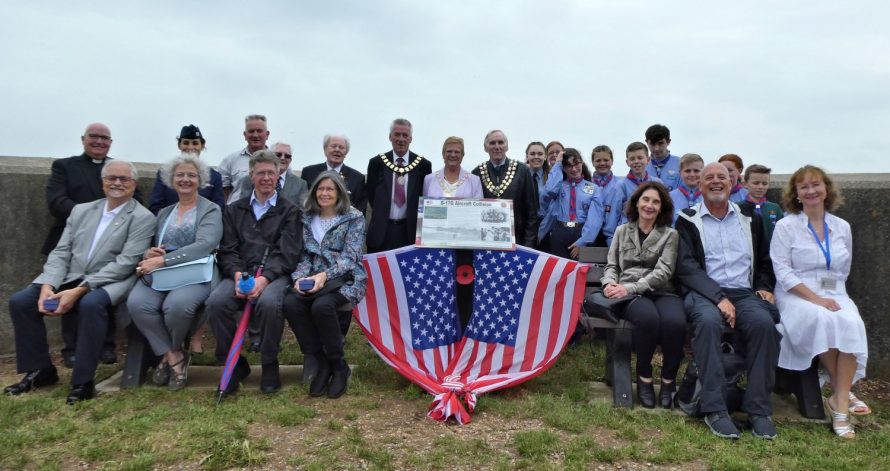 Official photos were taken before the families mingled with the crowds and took a nostalgic look around the area before retiring to the Island yacht club where refreshments had been laid on paid for by Stibbards and son. 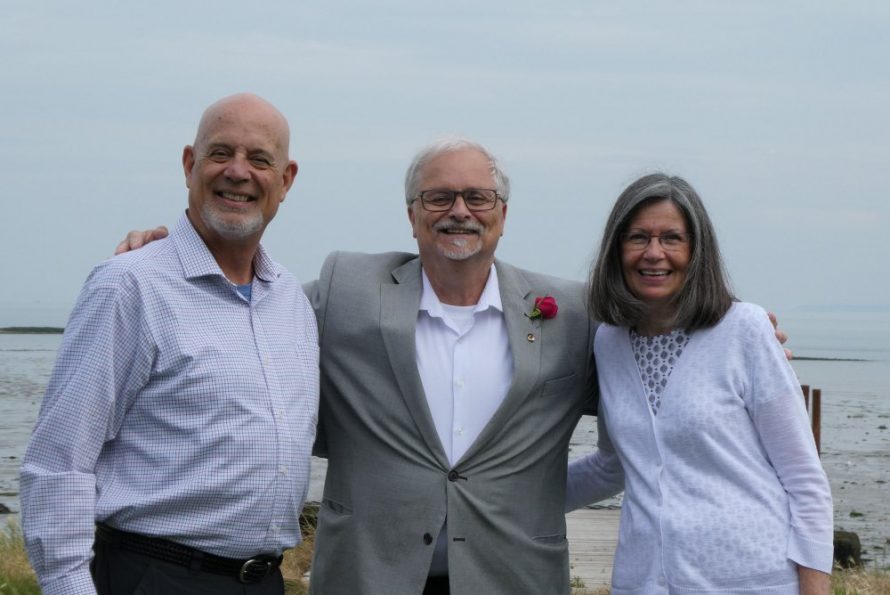 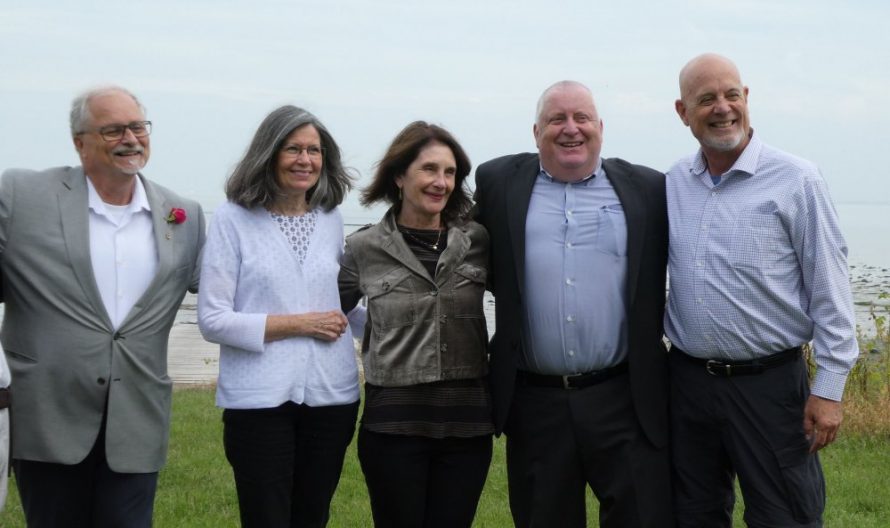 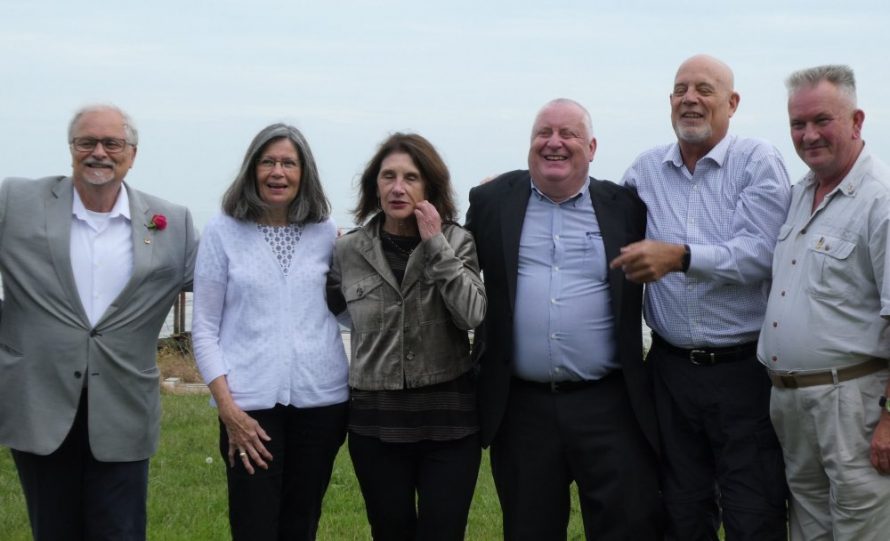 It had been an emotional event for all those involved especially the families. They had spent two nights at the Oysterfleet and I had the pleasure of meeting them there and joining them for a meal. Safe journey home and see you all next time. God Bless.

Addendum: Photos by Janet Penn and Liam Heatherson who is one of the Beyond the Point boys.

Just one last thing a big thank you to the man who came to the rescue and helped us sort and clean the benches before the event.