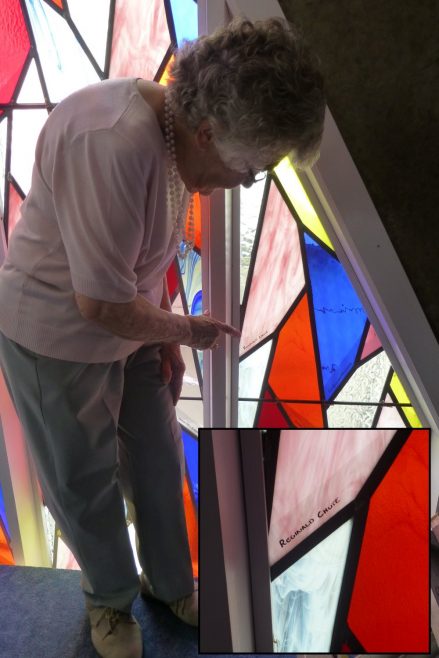 It was my great pleasure to show Hilary Stannard around Canvey today. Hilary’s father was Rev Reginald Chute who was the Vicar of Canvey 1927-1928. Hilary was not born until several years after her father left the Island.

First of all I took her to meet Rev Marion at St Nicholas Church. Where Hilary was shown where her father’s name has been engraved in the new window.

Our next stop was the Heritage Centre (St Katherine’s Church) where her father ministered to his flock. Dave Thorndike showed Hilary around.

Next it was the Dutch cottage where Jackie Terry had kindly opened the place up for us. Hilary fitted in here very well she was the only one who did not have to duck.

We were then off to the Lobster Smack where after having a very nice lunch we ventured up onto the seawall to take a look around and talk about how the place must have changed since 1928.

Last stop was Vicarage Close the area where her father lived in the old vicarage and a walk to the village to see the other Dutch cottage, the King Canute and the old buildings which were there when her father was the Vicar of Canvey.