with Rod Bishop and Graham Stevens

Back in July this year we were contacted by Gwenaël Breës, a film director based in Brussels. He was coming to Southend in August to film sequences on the local music scene of the 1970s and 80s.

During his research he had come across our website and found it of great interest. He asked if we had anyone who would meet up with them who could tell them about Canvey and particularly the music scene here. He also wanted to visit the Goldmine Club, the Paddocks and the Dr Feelgood Music Bar.

We could not cover all he wanted as some of the places no longer exist but two of my colleagues met up with them on the 9th August, yes that very, very wet day. Rod Bishop met up with them first of all and showed them around in the rain then they met up with Graham Stevens indoors as Rod explains below. 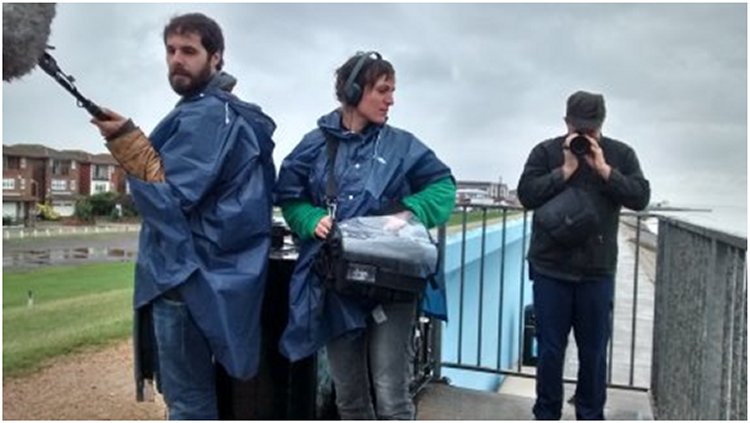 I met them at 2pm at the Lobster Smack where they did some filming, then to the Dutch Cottage for more filming. From there to the Paddocks and then on to Thorney Bay beach. The next stop was the location of the Goldmine and then to a café opposite the Monico for a coffee and more filming.

This was a welcome respite from the non-stop drenching we had been getting.

We then went to meet up with Graham Stevens and his brother Chris at the Baptist Church hall where they were doing a band practice. Once again we got drowned getting from the car, through deep puddles and drenching rain before getting into the hall.

They filmed the band doing a couple of numbers then did some filming inside the Chapel before we left with Graham and Chris to go to the Canvey Club which has some memorabilia of Dr Feelgood (what an experience that was).

Back on the road we went to the Oysterfleet to do some more filming and hopefully do some commentary at a table pointing out places on a map, but unfortunately the place was packed so we headed off back to the Lobster Smack. Once back there we were able to do some filming and commentary upstairs before their quiz night started.

I finally arrived home at ten past eight to dry out.

I would very much like to thank Rod and Graham for doing this and I will try to arrange something a bit drier next time.