A big thank you

When I was first asked to help produce the flood mural on the seawall more than six months ago I never thought it would end up looking as fabulous as it is. The project was daunting, what photos to recommend, do we have anything to show what we wanted on the story board? Because that is essentially what the mural is a story board telling the history of the seawall.

The artists have done an absolutely fantastic job and here I would very much like to thank them for all their hard work, the interpretation they have created for each panel and the talent they have shown it is hard to find words for. They have created a work of art. They are all lovely people and I feel honoured to have been working with them. 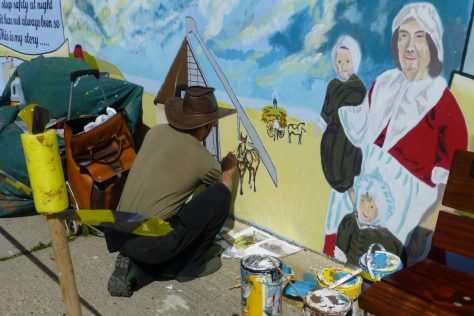 The first panel was painted by Richard Ashton. It shows the Dutch when they first arrived on Canvey.

There were no pictures for Richard to go by but there was the Dutch Cottage so that had to be included with his interpretation of what might have been a horse mill originally, we do not know as there are no records.

His panel shows the first seawall built of sticks, stones and mud. Parts can still be seen around the coast today.

He has done a great job and our Dutch visitors were very impressed, sorry you did not get a chance to meet them Richard. 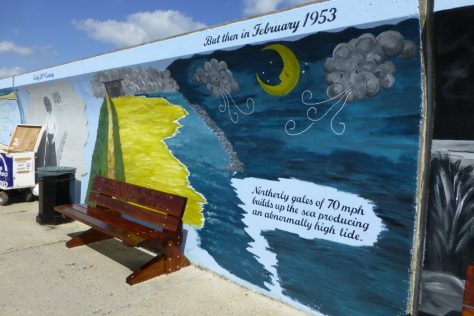 Tiffany Hughes has created a picture using the iconic photo of the stepping stones as the first part of her panel which takes us into the twentieth century. She had to span nearly fifty years to bring us to the storm in 1953. Her panel also shows the Concord cafe, which was built in the thirties and the beach as it would have looked at the time of the flood.

Again there were no pictures for her to use for the storm brewing far away but she has set the scene nicely for the panels that follow.

She is a school teacher and will be down the beach in coming weeks doing more panels designed by the children at her school. 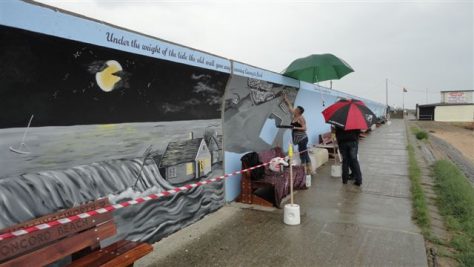 Sharon Vane has worked so hard on her panel. She is not a professional artist but has put everything into her two difficult panels.

We had no photos of when the wall broke but we did have a painting done by Harry Russell a local artist who lived on a houseboat in Benfleet Creek and Sharon has based her painting on this. Her dramatic black and white paintings really capture the mood of that horrendous night. Well done Sharon.

Sharon is also responsible for the colourful murals by the café and will also be painting the Carnival’s own float ready for the 12th. 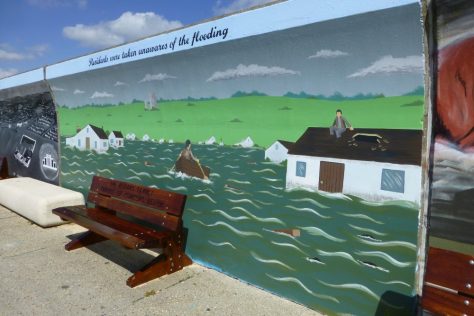 Justin Cook is a cartoonist so this is a little bit different from his normal work but he has done a great job showing the aftermath of the floods with people out in boats looking for survivors. A complete contrast to the previous panel.

Water was everywhere, people on roofs awaiting rescue and the seemingly calm atmosphere.

It must have been an eerie silence once the shouting and screaming had stopped. But I think he has captured that feeling in his panel. 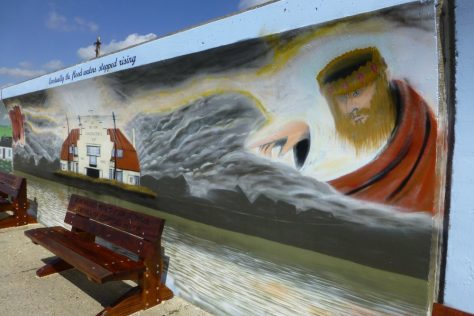 Frankie Leeming, what can I say about his fabulous picture of the iconic Red Cow/King Canute Pub. It has everything in this picture and being in the middle of the mural it is in a fitting place for this masterpiece.

The Red Cow was the HQ for the military stationed on the Island. The name of the military operation in Eastern England was called ‘Operation Canute’ and as the Red Cow stood on slightly higher ground and did not flood so made an ideal place for their HQ and filling of sandbags. This was the reason for changing the name to The King Canute.

With help from this picture and work going on behind the scenes hopefully everything is being done to save this great building that is so important because of its history with the floods of 1953. 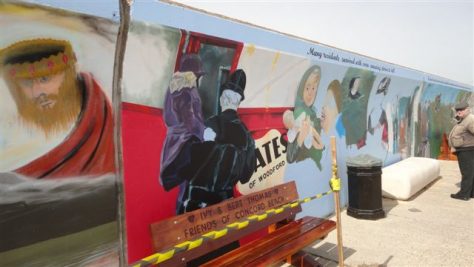 Sue Foulger has done a great job with our portrait panel. Survivors being helped to safety. Some again are iconic pictures seen around the world like Judy Taggart being brought to safety by PC Bill Pilgrim.

Sue has also had to use her imagination to produce a picture of Linda Foster the baby found floating in her pram her parents dead nearby. We did have a photo of Linda with her grandparents which was used as a guide and Sue has been told by Linda’s Uncle it is a good likeness. 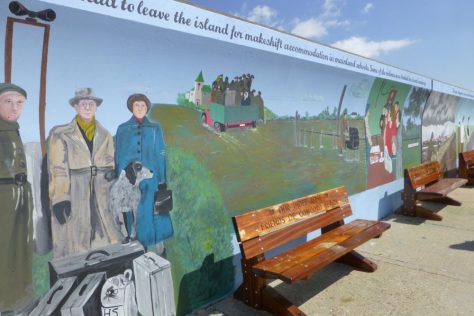 The Community panel was mainly painted by Maggie Rose’s students. It shows residents leaving the island as a mass evacuation was ordered before the next high-tide. Carrying what they could they climbed aboard lorries and buses to be transported to schools in Benfleet.

Here they registered, some moving onto relatives or finding a bed in the school, many in just their nightclothes. Queen Elizabeth the Queen Mother visited them there. This panel also shows that some of those who did not survive were later buried in Jotmans Lane Cemetery. 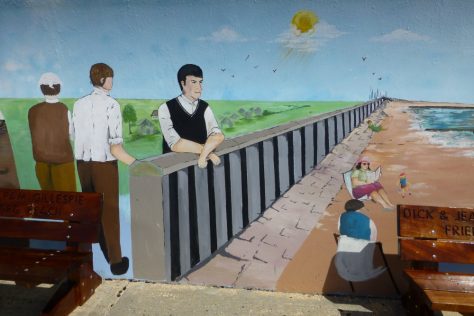 Liz Hall and her son’s panel shows soldiers with the epic job of filling the breaches in the wall before the tide came in again. It is probably thanks to those nameless soldiers and airmen that we have an island today. At one point leaving the island for good was talked about.

Their panel also shows the new seawall that was built in 1953. Sand, sea and sunshine so different from the previous panels.

They have done a great job depicting the post 1953 wall. It seems so real. 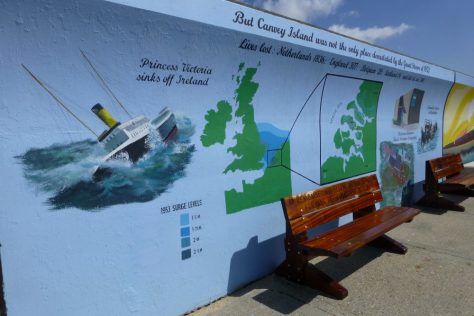 Maggie Rose has done a superb job showing the storms devastation not only in this country but on the continent too. The Netherlands in particular suffered far worse than us.

Maggie has also included the Flood Museum in Ouwerkerk, Netherlands and I was very pleased to be able to introduce our Dutch visitors to her on Tuesday. They were very impressed and I suspect the photo I took of her with them will be on the museum’s website very soon. I can confirm that some pictures from the day are already on their website and more will be added soon. 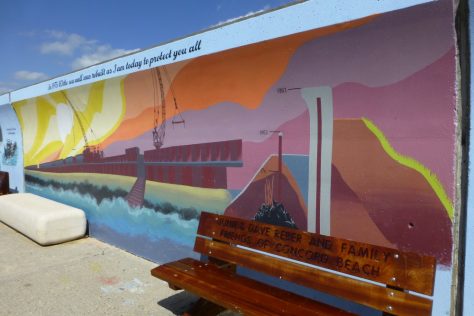 Darren Jones had a difficult job of painting the seawall as we know it today when it was being built. We all know what it looks like, grey concrete, now how do you make it interesting.

Ask Darren, he has turned it into a masterpiece with his dramatic style and use of colour. Who would have thought the wall would look so good.

Darren also shows the different levels of the seawall from the time of the Dutch in the 1600s. 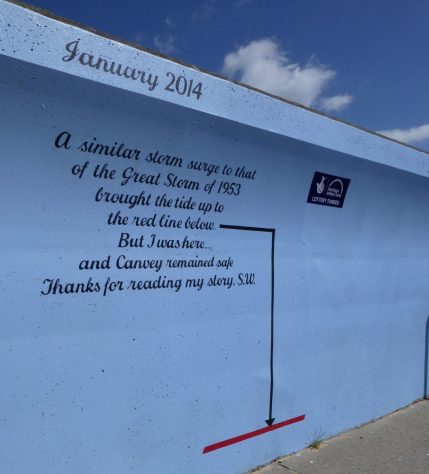 Then we must not forget Bob the Brush who has tirelessly been doing all the calligraphy. Without his work the mural would not be as good as it is.

Thank you Bob you can put your feet up now.

Thank you to the Friends of Concord Beach for coming up with the idea and all the artists for doing such a great job, you have done everything asked of you. Hope to meet you all again sometime.