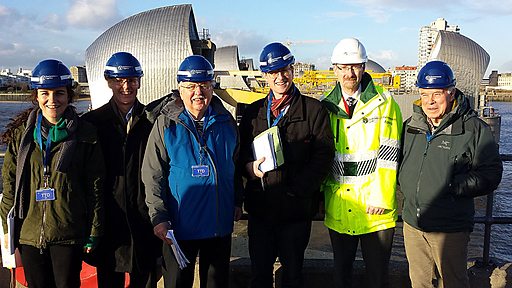 The Canvey Community Archive has recently been able to assist Neil McCarthy, producer of the above programme with the location and some content for it’s latest broadcast. The Long View, hosted by journalist, Jonathan Freedland is a discussion programme, recorded on location, which compares events in the past against similar present occurrences and what has been learned in the intervening years. This programme compared the 1953 Flood with the recent flood alert in December.

We suggested the location on Tewkes Creek wall (where the waters burst through on Jan31st/ Feb 1st 1953) and put the production team in contact with Derek Lynch whose graphic eye-witness account of that night provided a pivotal point for the discussion. The recording duly took place last Thursday morning, firstly in torrential rain on the creek wall and subsequentlly in the comfort of Derek’s home nearby.

The participants were; Environmental journalist, Louise Gray, historian, Peter Baxter, Craig Wallhouse, Head of Flood Incident Management at the Environment Agency and last but not least famous former weatherman, Michael Fish.  Although the programme was broadcast today (Tues) you can still catch it for the next seven days on BBC iPlayer. (The site says for the next year – Ed)

I think BBC4 used to be called the Home Service and this was certainly ‘home-made’ as a large proportion was recorded in Derek’s lounge. Many thanks to Derek and Val for their hospitality particularly to Val for providing all those teas and coffees.