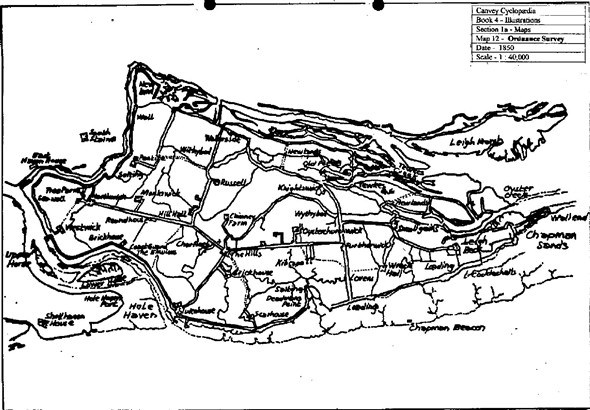 Canvey Cyclopedia labels the various farms across Canvey in 1850, the days when Canvey was still but farmland and a small village, much like the Wild West, as I like to allude to! Only few of these actually remain today, with Brickhouse Farm being one of the only still in operation. So, where did all the rest go? Well, a majority became left abandoned, and most were built on as land was taken up by development. Only few survived on the land which today is west Canvey; a large area of wilderness which has escaped money-maker’s development. It remains much like it has been for hundreds of years, especially Bowers Marsh. Waterside Farmhouse still stands as the recycling centre today. We made it our mission to uncover the sites of two particular farms which lay on land not covered at by human expansion – Pantile Farm, and Tree (Southwick) Farm. I will say now that the farms in question no longer structurally exist. However, the sites of these two farm houses caught my eye as being on untouched ground – I decided that the remains from their demolition, from as much as a few decades ago, must still be there.

Satellite Map of the Farms Today

Myself, BTP Joe Mander, and guest explorer Sam Hill, took the trek out into Canvey’s countryside to investigate the sites of these farms – probably the first with the specific intention for many years. We parked in the recently established RSPB Nature Reserve West Canvey car park. We then set west for the current seawall, which had been there for around 200 years, made only of as grassy bank. Our findings of the first farm site are below:

Despite the buildings being recorded as standing as long ago as 1777, on Chapman and Andre’s map, the farmhouse has probably stood up until several decades ago. The date of the construction of the main farmhouse at Pantile is unclear. We were walking along the site of the farmhouse, characterized by raised ground and greener ground foliage, when we felt something hard underfoot. We pulled up some of the grass, and instantly came across the foundations of brick walls which made up the farmhouse. They were classic Victorian red terracotta bricks, characteristic of late Victorian architecture. However, the farmhouse can be seen derelict in this 1935 photograph, meaning the farmhouse could have been constructed earlier. Bricks for the farmhouse would probably have been of local origin, perhaps from the brick factories of Benfleet or Hadleigh. This means that it is hard to class the bricks as part of that Victorian movement of red brick, so the house could have been the same one from its initial construction, sometime probably in the 1700s. Pulling it away further from the red brick being of the Victorian era, the farmhouse appears to be of earlier style, not Victorian, in which brick would have been used extensively. Instead, brick appears to make up only the base of the building, and the rest being either made entirely of wooden timbers, or the brick walls lined with wooden timbers. The architectural style would suit that of the 1700s (although farmhouses were private constructions and may not follow any contemporary style), and bricks found in the bushes, which had been weathered and overgrown, appeared to be of earlier than Victorian origin. Therefore this was probably was the initial farmhouse, which had never been replaced since the 170os. However, little mention of the farmhouse appears in anywhere before the mid 1800s. The bricks were layed short-ways next to each other, which is quite unconventional – probably to make a wall only one brick wide as cheap as possible, without it being too thin. Either that, or it could have been the step to the front entrance – the bricks from the first layer protrude. In fact, neither layer of the the bricks showed signs that there would have been more layers on top, meaning that it could well have been a step. Bricks elsewhere were laid usually, length-ways. Therefore the bit we found was probably steps/not the main walls of the farmhouse. 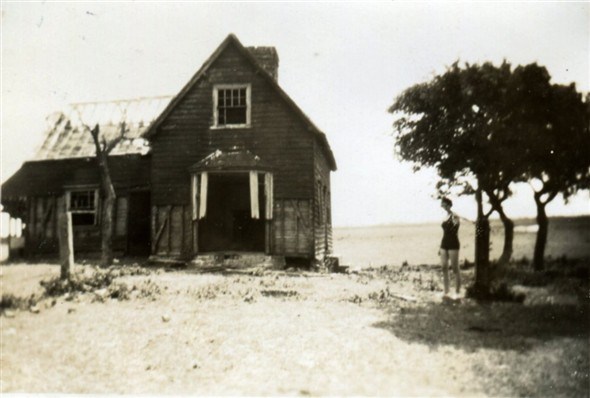 Joe also found a piece of wooden timber in the grass, probably that of what lined the farmhouse in the photograph. The wood had a very dark rotten aesthetic, and it looked several hundreds of years old. It was about 1 meter long, and found lying out of place just under the grass foliage. It is lucky to have survived as long as it has, and looked older than the Victorian era. Whether the farmhouse which remains archaeologically today was built in the Victorian era, or several hundreds of years before, will remain a mystery. The farm was known as ‘Pantile Farm’ from 1774, and before was called ‘Longwick farm’. The house in fact follows Dutch style. Graham Stevens from the Canvey Community Archive stated that: “The name has always fascinated me because I could see no direct Canvey connection (marsh,wick etc). This has prompted me to do a little research on ‘pantiles’ as roofing material and find that they first appeared in Eastern England in the 17th cent and they were imported from, guess where? Holland! So it would appear our farm was named after it’s roof-tiles which could have arrived on Canvey as imports or more likely as ballast on Dutch eel-boats plying between Holehaven and Holland. P.S. The floor of Furtherwick Farm was reputed to be made of Dutch bricks originally used as ballast.” Some bricks in the bushes were found to be coated in a thick tar-like substance, which was again quite old in appearance. A section of reddish tiel was also found, possibly a piece of the infamous Dutch ‘pantile’.  It is worth noting that archaeological digs took place on the site in 1995-6. One thing however is almost certain – the farmhouse would not have been built in the late Victorian era, because it was shown in the photo above to be long abandoned by 1935 – it probably was built and used long before then. 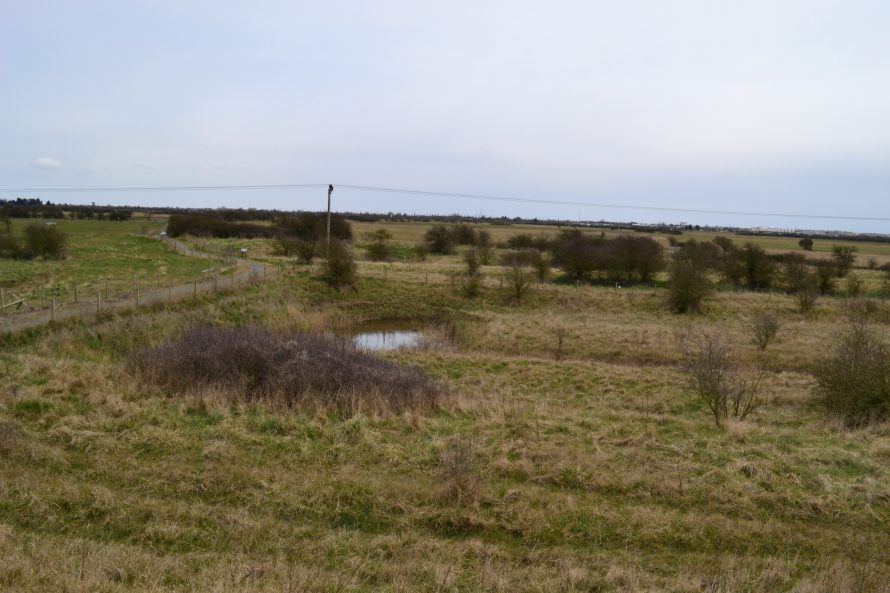 The farmhouse is located just left of the telephone post, before the road

It is described in 1867 as:
“Pantile” belongs to E. Woodard, of Billericay, and likewise “Kersey,” situate in South Bemfleet.He purchased these farms of King’s College, Cam­bridge ; they were formerly parcel of Kersey Priory, at Hadleigh in Suffolk.

The next farm was Tree Farm, the most commonly known ‘Tree Farm’ on Canvey (there were several). It lied behind the seawall north of Northwick Road’s very end. The fact that both farmhouses were built near the wall indicates that a house with a view was clearly what farmers would usually go for! Up until recently, the site of the farmhouse would have been sheltered by small trees, although upon arrival we saw these had been cleared. The ground either side of the path through the middle was very flat, as if it had once been flattened for foundations of a building. The same ground plant which grew on the Pantile site also grew here too.

The below photograph, from possibly the 1990s, shows the site when it was last investigated. The main difference is that the tress are still standing. 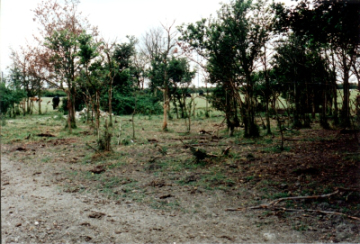 Tree Farmhouse site in the 1990s

We also know that the farm was used as a household beyond 1954, and was demolished some decades ago. It is described by SEAX Archeology as:

Single-storied house with attics, timber-framed and weatherboarded, with thatched roofs. Built in the 17th century, the house is of central-chimney type with `modern additions’ to the rear and an original central chimneystack. On OScard (1955) as `site of’ and deleted from OS field document. Nothing shown on OS 1:25000 map. House shown on C and A map, 1777. Demarcated on all sides by a ditch. Trackway leads in from south drains either side. Some tipping within area and farm track runs N/S through centre of site. Footings of building and ancillary structures probably survive beneath surface. Main damage to site caused by track cutting into sub soil

Whether it consisted of some concrete or not, we did find a small sudden mound on the site, which had chunks of concrete lying next to it, which looked old and rough, with small stones in it. We also found some old wood which was certainly rotten, and appeared to have once been a set of shaped timbers, which we know the structure was built from originally. We also finally found some brickwork pieces, which looked like red terracotta brick again. It had a glaze or tile cemented onto one side of it – perhaps from the floor? What the house was made from again remains a mystery, but there is the evidence.

As a final note, I can say this minor expedition was very successful, and remains were established of both farms. It would appear that if you were to remove the top soil from the site for Pantile, the building’s actual wall outlines e.t.c. would be clearly visible. A further investigation will be carried out at a later date now we have further knowledge, and we will come more equipped. This is the first time the remains of Pantile and Tree Farm have been recorded since demolition (or in the case of Pantile, since the aforementioned archaeological dig in the 90s). We are certainly the first to provide pictorial evidence. A video of our discovery will also be featured, and will appear shortly on this page. I will leave you with these two captivating images made using  Adobe Photoshop by Sam Hill, who joined us on the trip. He has merged images of the Tree Farm site and the old photo of the ruined Pantile Farmhouse, to create a representation of what it might look like to stumble across one of Canvey’s many old farmhouses, if one stood derelict today. Note this is not specifically meant to depict either of the two farms featured.