Written by the author of 'Invaders of Canvey' Olivia Whitcomb, B.Ed Hons. 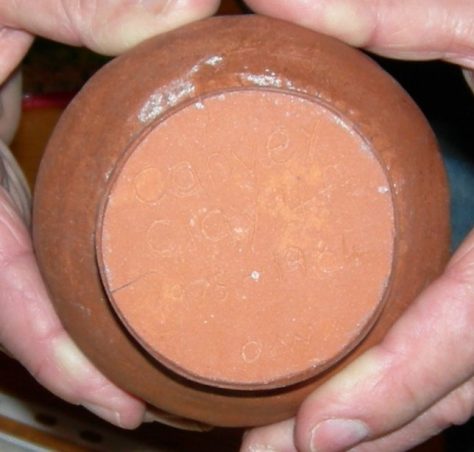 The bottom of the pot is marked ‘Canvey Clay 4ft 1976-1984’ signed OWWhen I was training as a teacher my specialist subject was art, focusing on pottery. As part of my studies I researched into the history of Canvey and I learnt that in Roman times salt was collected on Canvey by evaporation of sea water in porous pots for salt collection.

During a walk along Canvey beach with my daughters we found some pieces of broken rough pottery. I took them to Southend Museum where it was confirmed that they were in fact pieces of Roman pottery. This sparked off an interest for me to research the background of Roman pottery in our area. I was directed to a book called The “Red Hills” of Canvey written by Ernest Linder B.Sc. He suggests in his book that the “Red Hills” were sites where the Roman/British people manufactured a crude type of red ware made from silty clay.

I realised that where we had found our pieces of pottery – between Thorney Bay (locally known as Dead Man’s Bay) and the Labworth Cafe – was fairly close to one of the “Red Hills” of Canvey – in Leigh Road. This fact helped to increase my interest and I decided to do some research into Canvey clay. I had access to, and was able to collect, clay from various depths, i.e. 4ft, 7ft and 60/70ft. The 4ft clay was from a pond being excavated in my own garden. The 7ft clay was from an area of the sea wall that was being reconstructed near the Lobster Smack Public House on the sea-side of the wall and the 60/70ft clay was from the very bottom of the hole where pile driving was being carried out for an oil storage tank at London & Coastal Oil Wharves in Haven Road (I had worked there in their offices when they were in the old Kynoch Hotel and still, at that time, had connections there). 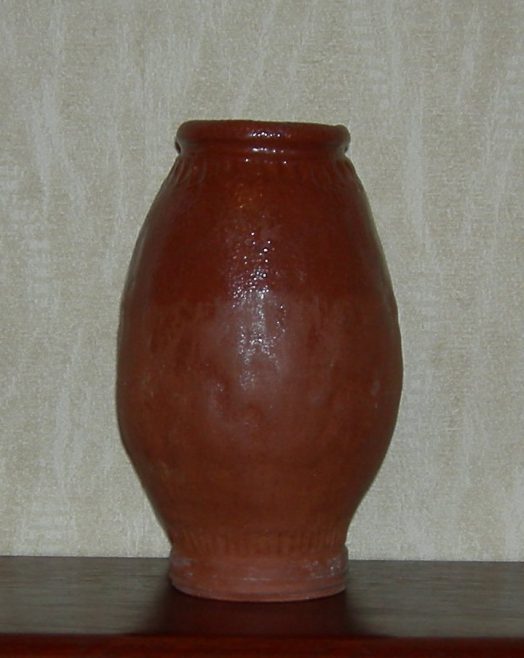 Clay pot made from Canvey Clay taken from 4ft down

I created pottery samples and carried out various tests, using them pure and also mixing the different clays together in varying quantities. These were “fired” at different temperatures to see how the different depth clays reacted.

Ernest Linder also mentions about some of the pottery found in the “Red Hills” as having a green glaze. The “pot” featured in the photograph shown here was a sample made from the clay taken from 4ft. and fired using a clear glaze. This clay is rather “sticky” to work with and on this particular pot the glaze did not turn green. However, when a pot I had made from the 60/70ft batch of clay was fired with a clear lead glaze, the glaze did in fact turn green. This clay was quite silty but easy to work with and my sample pot resembled the pieces of glazed pottery that Linder writes about. This led me to believe that the pottery found in the “Red Hills” was, as suggested by Linder, made locally but that it must have come from quite a deep depth and that the green glaze was a reaction to the particular clay body used at that time. I also came to the conclusion that the production of pottery was probably a secondary occupation to that of producing salt from evaporation for the Roman/British.

Thanks to Peter Stacey for the loan of the pot and Olivia for taking the time to write this for us. We are hoping to have more pictures later. 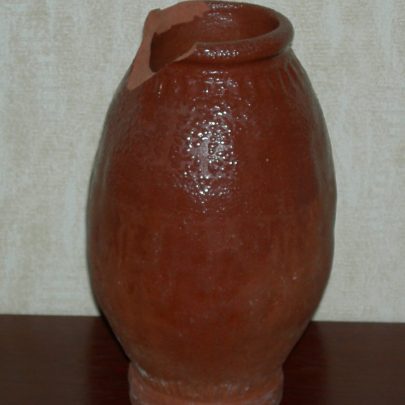 By Janet Penn and Graham Stevens