You are here: HomenextHistorynextRoman finds and morenextExcavations at Canvey Point

A Report by the Castle Point Archaeological Group Compiled by P.J.Johnson. 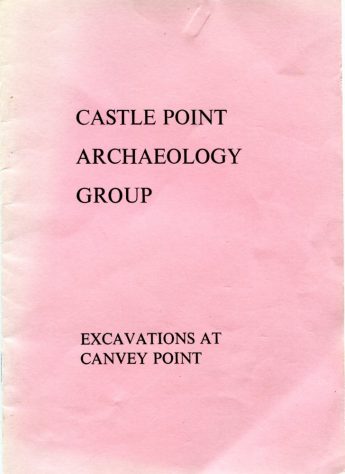 Canvey Island is seldom thought to have any ‘History’ worth considering. The popular belief is that prior to the reclamation works of the seventeenth century Canvey was nothing but a desolate marsh swept by the tides and occupied by a few lonely shepherds. This was probably the pattern for most of the medieval period, for Canvey has always been at the mercy of the elements. However, the patient work of the Archaeologist is painting a very different picture of life on Roman Canvey. Here was a centre of industry with salt making on a large scale and commerce with pottery being imported and exported from a wide area of Roman Britain and Europe.

The large quantity of Roman material from the Island shows that the population was considerable although we have no way of estimating actual numbers. The fertile soil, the rich waters of the Thames Estuary together with abundant wild fowl and banks of shellfish just off shore would have made early Canvey a very pleasant home. 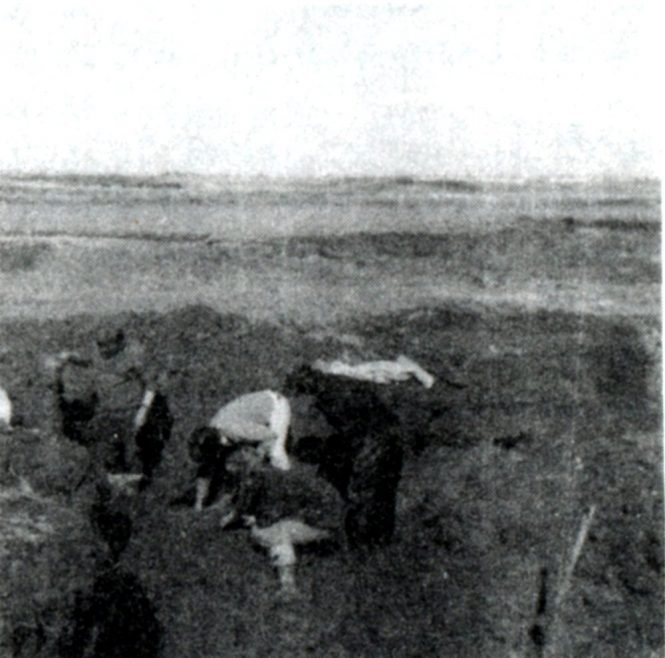 The obvious threat to this way of life comes from the sea and over the centuries the sea level has been steadily rising, informed sources now estimate that the sea level is approximately 7’ 6″ higher than during the Roman period. This would make startling changes to the geography of Canvey; Benfleet Creek would be virtually dry, the present day beach line would be touched by only the highest tides. The less obvious threat to the commercial Roman way of life is the financial disruption caused by the power struggles of rival emperors in Gaul (modern France). The flourishing Samian industry of central Gaul was killed off by the wars between Severus and Albinus in the late second century. In fact these constant disruptions were one of the main causes of the final collapse of the Roman empire. Whether the community of Canvey was wiped out by the waters of the Thames estuary or the flood of civil commotion and subsequent financial ruin is not recorded.

Pottery finds indicate that the site at Canvey Point was occupied during the Iron Age ‘B’ period, possibly as early as 200 BC. This date coincides with a radio­carbon date of 180—40BC obtained from a piece of carbon­ised wood found at Osea Road, Peldon, North Essex by Mrs. Kay de Brisay.

The characteristic wheel turned pottery of the Belgic Iron Age, c.100 BC to 43 AD is fairly commonly found on the site.

The site at Canvey would seem to have been in very early use. One of the cremation groups found included a rare lead glazed pot of a type known to have been used by the legions in 43 AD; first century St. Remy ware, Samian accurately dateable to approximately 75 AD all prove that Canvey Point was continuously used from the first days of the .Roman occupation.

Thereafter we find Samian ware from France, Rhenish ware from the Rhine land, great Spanish oil jars, colour coated ware from the Nene valley in Britain, all indicate the vast trade network of which Canvey was an important part. Dating becomes difficult after 300 AD and the exact end of the Roman use of the site cannot be determined.

Land deeds from the thirteenth century mention property on the western side of the island and the green glazed pots of that period are found broken on the red hill, presumably left by medieval shepherds sheltering from the tides oblivious to the 1500 years of mans endeavor represented by the soil beneath their feet.

It is the compulsion of the archaeologist to try to understand and to paint an image of those far off unrecorded days using a pallette coloured with the everyday articles lost or discarded so long ago. As Sir Mortimer Wheeler observed; “We are digging up not things, but people”

The value of salt in primitive society is hard to estimate today. It is a valuable food flavouring, the main method of preserving food through the winter, an antiseptic and an essential element of diet.

Our hypothesis is that salt production was carried out in three stages:

1:Large shallow pans were flooded from the river at the high spring tides, these were left reduce by natural evaporation by the sun and the wind.

2:The resulting brine was boiled in pans using the structures discovered in 1982 (details later)

3:The resulting salt cakes were baked m the ‘kiln’ structure discovered in 1978.

The constant boiling would have burned a great deal of wood producing much ash, this mixed with the pottery debris of the salt containers, known as briquetage, combines to make the characteristic red hill. These hills are typically 14 acre in area and three to four feet high, a fair indication of the amount of work that must have gone into their production.

When considering the pottery importing and exporting industry of Canvey, so far there is no evidence of actual production at the Point, the question that springs to mind is why Canvey?

Was the merchant avoiding high London harbour dues by landing and storing his wares at Canvey or even evading the Roman equivalent of Customs and Excise? The very early post conquest date of the Pottery found at the Point indicate to me that the individual controlling the pottery industry was already associated with the salt making business. The established salt distribution network could have provided a ready made artery for the sale of the latest Roman pottery — “Direct from Gaul to your table, madam”. The allocation of the salt and or pottery rights for the district could have been made as a reward to some Roman official or Briton for services rendered during the conquest or a sharp brained entrepreneur seizing the opportunity to make his fortune.

The commercial use of the site is confused by the presence of a cremation cemetery dating to the second half of the first century AD (50-100ad). It was contrary to Roman law to bury people within the confines of a town, so it would not have been considered good practice to bury the dead in the middle of an industrial operation. Does this indicate that activity on the site stopped by this date only to start again after a period of time had elapsed.

Could the individuals buried here have been the victims of some natural disaster?

It does not seem right to finish this chapter with questions, it would be much neater to finish with sharp answers and explanations but I’m sorry to say that those answers are obscured in the mist of time.

The powerful spring tides of 1978 scoured the mud flats off Canvey Point, eroded the shallow mud banks and revealed this very interesting and very rare feature.

The first trace, an oval of bright red fired clay was noticed in the ground surface by Mr. and Mrs. G.Lewin, members of CPAG and the group decided that further examination was essential.

The excavation showed that the fired oval was in fact the top of a typical Roman period pottery type kiln, one of a pair of perfectly preserved structures of fired clay. The individual firing chambers were practically identical in construction and symetrical, being approximately five feet long and 2’6″ wide, the combined unit which appeared to have been built in one stage was thus about five feet square. Both chambers were fired from a common stoke-pit, the stoke-pit was sampled but full excavation was prevented by the deep overburden as the pit extended under the present edge of the marsh.

Finds from the surface were plentiful but unstratified, the chambers were half emptied without producing any recognisable pottery. The flow of the tide and the imminent inundation of the site so the excavation was carefully back filled, first lining the chambers with polythene sheet to protect the unexcavated levels below.

On re-opening the site, the following week we found the chambers dug out the polythene sheet displaced and the structure badly damaged. This was sad disappointment for us. However despite this blow and the fact that the excavation was continually flooded to a depth of 12″ we pressed on.

The remaining fill was removed but contained no recognisable pottery apart from some briquetage, however a wedge of Roman floor tile had been stuck with clay to the North East corner of the Eastern chamber as if to support a standard ‘fire bar’ this corresponding to the Fired clay wedges and kiln furniture published by Mrs. de Brisay. These clay wedges are fairly common on recognised salt making sites ascribed to the Iron Age and Roman periods, and subsequently a number have been found in the immediate vicinity of this kiln although not during the course of this excavation.

I believe this is the first example of definite Roman material being used as a wedge and being found in its original position in the kiln.

Thanks to the good offices of Mrs. Kay de Brisay, Dr. A. Clarke, of the D.O.E. came to date our find by measuring the thermo-remnant magnetism and at the moment we are still awaiting his findings.

Apart from the floor tile wedge no dateable pottery was found stratified during the excavation. A small sample was taken from the stoke-pit and this was found to be closely packed with briquetage associated with these salt making sites. It was unfortunately beyond our capacity at that time to fully excavate the stoke-pit but this could prove an interesting and fruitful venture for the future.

Early salt making sites are now recognised over a fairly wide area of the tidal estuaries of Essex. Basically the salt water is trapped probably at spring tides in shallow pans, natural evaporation by sunlight and wind would reduce his to brine and this brine could be boiled to produce a cake of salt. 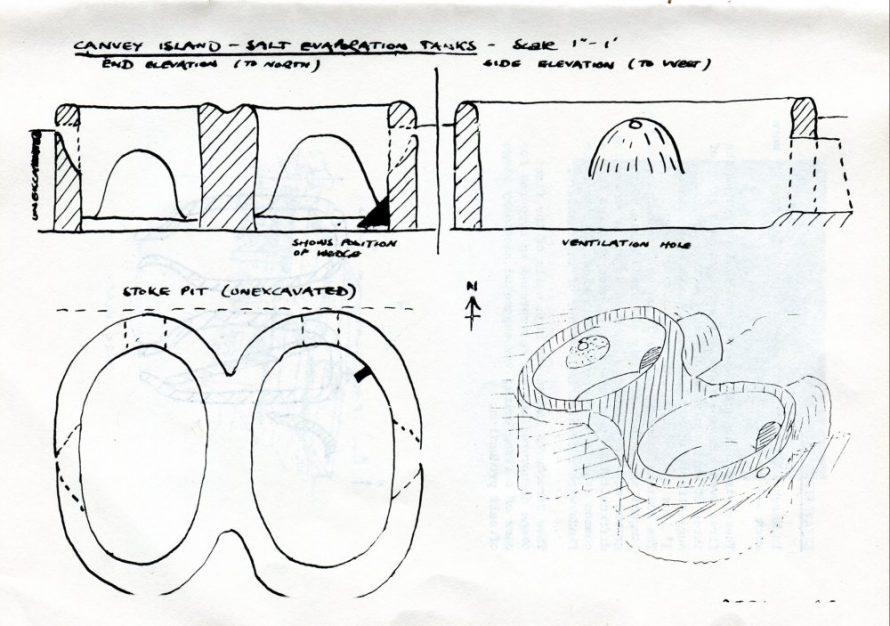 We have yet to find any shallow tanks for the first stage of the evaporation process, if indeed any traces would remain although we recognise the existence of level firm ‘working floors’ seemingly of fired clay in the soft mud.

The brine boiling apparatus could be represented by the finds of 1982 detailed herein and the third stage of the process by the oven detailed here for baking the salt cake prior to despatch.

In March 1982 further traces of fired clay ‘ovens’ were seen and excavated. 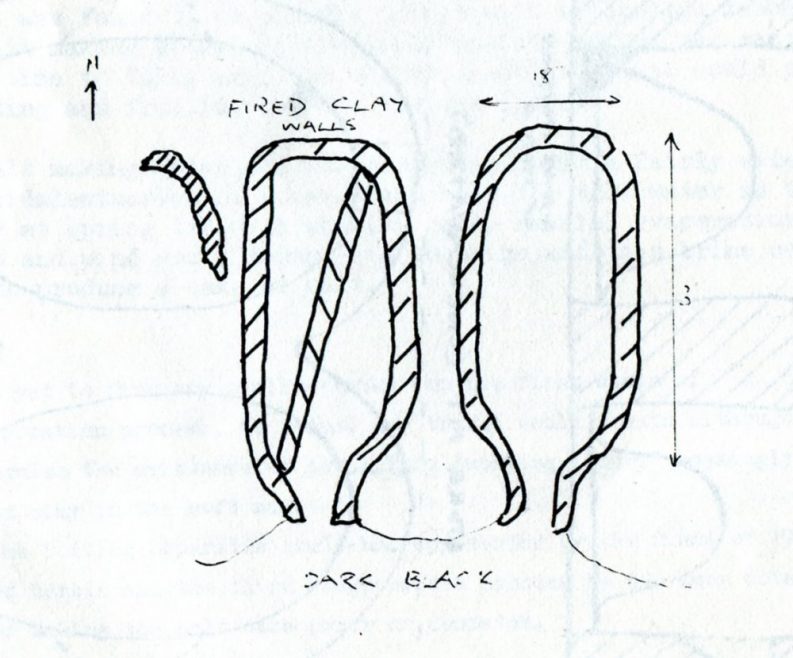 These structures were smaller and shallower than the first oven excavated possibly arranged as a group of three of which only two survived with a fragment suggesting a third. Each chamber was approximately 3’ long and 18″ wide and were about 8″ deep. The western chamber had a division or fire bar across the longest axis. The extremely disturbed state of the ground and the incoming tide made detailed excavation difficult. The chambers seem to have been fed from a common stoke pit to the southern side. No pottery or finds were recovered from either of the chambers. 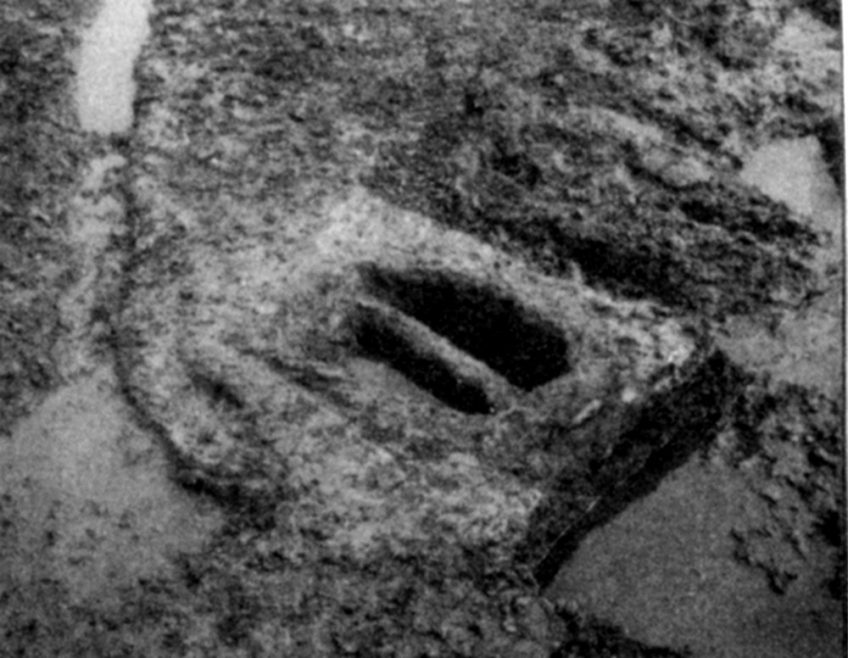 These structures lacked the high walls of the first ovens discovered and are interpreted as supports for pans of boiling brine, the suggested secondary stage of salt production. 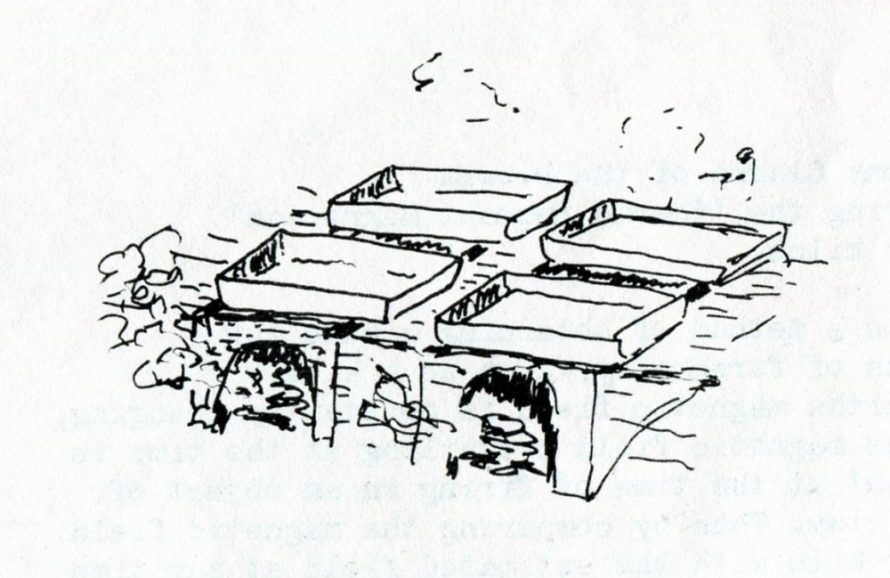 Dr. Tony Clarke of the D.O.E. measuring the ‘Thermo Remnant Magnetism’ of the kilns. 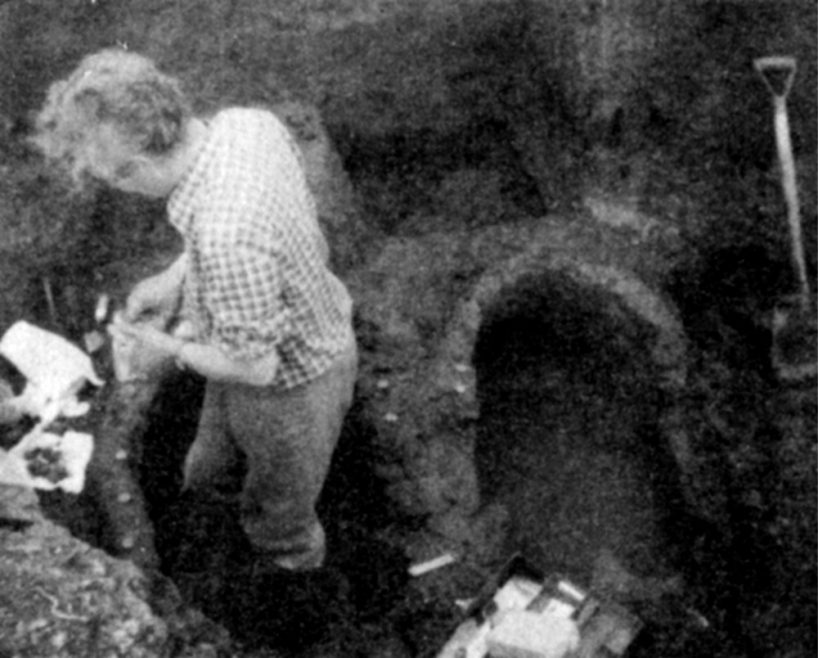 Due to government cuts our figures are still waiting for analysis and the results are not yet known.