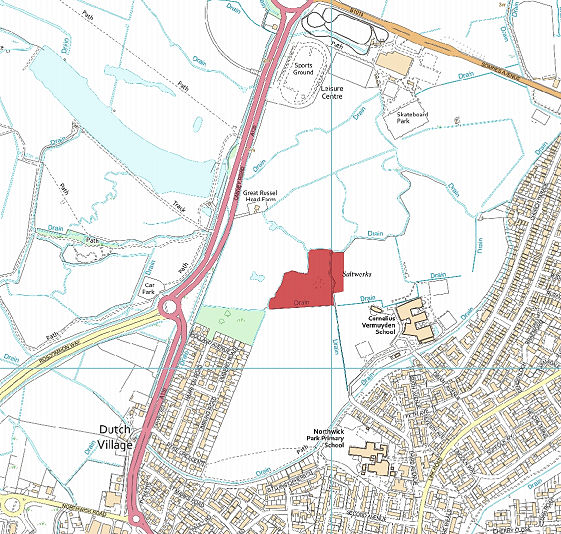 Map showing the rough location of the monument

The monument is situated on low-lying ground (below 10m OD) near Dutch village, (a modern housing development) in the western half of Canvey Island. It includes the remains of a Roman salt manufacturing area (or saltern) partly visible as a series of earthworks with associated buried remains, the soil from which exhibits a distinctive red appearance, hence the commonly used term ‘red hill’.

It includes the remains of a Roman salt manufacturing area (or saltern) partly visible as a series of earthworks with associated buried remains, the soil from which exhibits a distinctive red appearance, hence the commonly used term`red hill’.

The principal feature of the saltern is a substantial mound (or `red hill’) measuring some 60m square and standing up to 1.1m high. The southern half of the summit forms a level platform, contrasting with a more pronounced raised area to the north. A smaller mound lying adjacent to the east measures some 15m north to south by 10m and marks the north eastern extent of the site. Thus the total length of the surviving earthwork is some 75m north east to southwest with a maximum width of some 60m. Small scale excavations around the perimeter of the site in 1972 showed the original extent of the `red hill’to be an oval mound some 100m north east to south west, some 3.5m above Roman ground level. The Roman strata were shown to be intact although no finds were recovered. Medieval reuse of the salt works was also evident.

Other less pronounced earthworks, both ridges and depressions, which represent activities associated with the saltern and later, medieval cultivation around the mound, are visible surrounding the saltern and these are included within the scheduling.

All modern fencelines, telegraph poles and cables are excluded from the scheduling, although the ground beneath these features is included.

Salt has been produced from sea water or, in inland areas, from brine springs since before Roman times, and the technology used in the medieval period displays a marked continuity with earlier production methods. Brine, from which the water was evaporated to produce the salt, was collected in one of two ways, either by its filtration from coastal sand, soil or pebbles impregnated with salt water during high tides and periodic inundation, or by its collection in pools or pits filled at high tide or by inland springs, sometimes by way of a system of channels, dams and sluices.

Medieval salterns include a range of features connected with the collection and evaporation processes, of which the most visually distinctive are the oval or kidney-shaped middens of waste material which may cover areas of 2ha or more. Other features usually survive in buried form beneath and around the middens, illustrating the fact that salterns were often in use for periods of at least a century, during which time they were occupied seasonally, their component structures being rebuilt at the beginning of each summer or as required. Evaporation was often aided by an evaporation kiln fuelled by peat or wood products, of which several different types are known, and the remains of temporary wooden buildings, wooden or wicker troughs and clay-lined pits have also been found during excavation.

Salt was an expensive commodity during the medieval period, particularly in demand for food preservation and curing. Salterns are known from documentary sources and place name evidence to have been widely distributed around the English coast and the inland brine springs of Cheshire from at least the end of the 11th century. The industry had declined by the beginning of the 16th century and competition with the superior and cheaper rock salt, mined from the beginning of the 17th century, led to its demise during the early post-medieval period.

Once a common site in coastal and estuarine localities, extant salterns are now extremely rare monuments nationally. In Essex out of over 300 recorded `red hills’ only a very small number survive. Preserved within the stratigraphy of the `red hill’ 260m south east of Great Russell Head Farm will be structures and artefacts associated with the saltp roduction process: settling tanks; hearths; flues; fire-floors and brique fired fired clay artefacts associated with salt production). The study of theses tructures will greatly enhance our understanding of salt production in theR oman period.

Of particular interest are the hearths with their associated briquetage furniture which formed the centres of the `red hills’. At present little is known about their construction and mode of operation. It is thought that two types of hearth were commonly used: the open hearth and the closed hearth. There is as yet no in situ evidence for open hearths; it is thought that remains would survive as a burnt levelled area with associated briquetage furniture such as evaporation vessels and pedestals. There is a small amount of in situ evidence for closed hearths which are more easily recognisable as they had walls and a flue; however the information contained within an intact `red hill’ such as that near Great Russell Head Farm is capable of greatlyenhancing our knowledge of their operation.