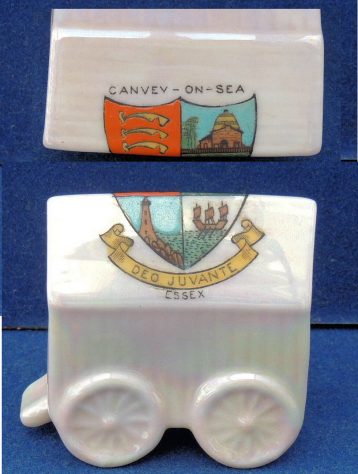 The horseshoe below has the following on the back:

S. Hancock and sons. The Corona China. Made at Stoke on Trent.

Sampson Hancock, a prominent Wesleyan Methodist, started potting in 1857, operating independantly and in partnership with others
In 1891 he established the business of Sampson Hancock & Sons.
Sampson died in 1900 and the business was continued by his three sons – Jabez, Harry and Arthur.
In 1935 the business was in financial difficulty and was made bankrupt. It was restarted as S Hancock & Sons (Potters) Ltd. and moved to the Gordon Works, Hanley – which was renamed the Corona Works.
The restarted company was not a success and it finally closed in 1937, having been put into receivership on 23rd March. By this time it was a smaller enterprise, employing around 150 people.

According to this information it would mean the horseshoe is dated as 1935-7.