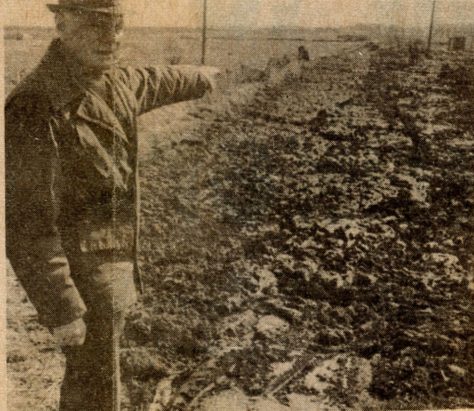 Path to despair: George Pollock points out where the path went

Ratepayers were delighted when coun­cil workmen repaired a damaged footpath with smart new tarmac. But their happiness turned to despair when bull­dozers moved in and tore it up again only days later. Families complained to Castle Point Council that the repairs had been a waste of money.

In fact the bulldozers belong to contractors Laur­ence Homes, who are building the new Hilton Su­burb estate through which the old footpath — raised on an embankment — runs. While clearing the site their bulldozers tore three giant gaps in the footpath, which runs from Water­side Farm to Somnes Avenue. They claim they had council permission to do it. One of the gaps was in the exact spot where council workmen had laid new tarmac following complaints from the Sixty Acres Residents’ Asso­ciation. Their chairman, Mr. George Pollock, said: “I saw the council workmen fill and make good all the bad spots and it was a week at most before the contractors moved in and tore it  up again.

A spokesman for Laurence Homes, who are building 450 houses on the site, said: “I am surprised anyone really uses the path now. “We have the full consent of the council to go ahead with this work and the path will still be open when we fin­ish.” He said the three gaps would accommodate roads leading to a development of 50 houses on the north side of the path. When the work was finish­ed the path would slope down to the pavement enabling walkers to continue using it.

West Ward Coun. Ray Ho­ward, vice-chairman of the council, said he had received many complaints about the path being torn up. “I strongly objected to this,” he said. “Many people have com­plained to me and I have been in touch with the council.”

Mr. Bill Bone, the council’s chief technical officer, said they were investigating the matter. He said: “Our workmen went down to repair parts of the path.”