You are here: HomenextHistorynextWartime CanveynextFalklandsnextHome, sweet home for the Task Force heroes

Family and friends turned out to give Canvey’s three Task Force heroes a rousing welcome home at the weekend. Sailors Peter Bradford, Derek Lincoln and Hugh Owen had survived the horrors of war the Falklands and the Argentine attacks which sank their ships. There were tears of joy as the brave trio sailed into Southampton on the QE2 with 700 other survivors from HMS Coventry, Ardent and Antelope. 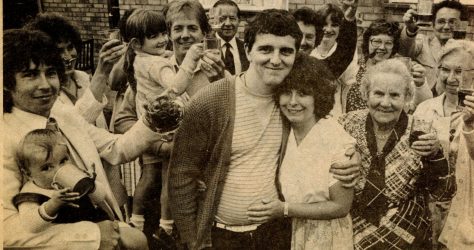 Celebration: Peter gets a rousing welcome from family and friends

As they relaxed later at family parties, they told of the brave and tragic sides of the grim bat­tle. Peter, 19, of Geylen Road, a weapons electrical mechanic, was on board the destroyer HMS Coventry when it was raked by bombs. In just 20 minutes the ship was an upturned hulk and Peter was in the sea hanging grimly to a raft. He said there was little warning of the raiders, but the ship was at action stations when the first wave’ struck. He was in the centre of the ship on the helicopter flight deck on torpedo duty.

He said the Coventry crew only had time to put up a barrage of close-range fire of four inch guns and three-inch rockets before three bombs struck the port side. Peter added: “Within five minutes of the bombs blowing away a large part of the port side, the ship was listing 50 degrees. We knew there was no hope of saving her by then. Everybody was calm. We released life-rafts and men took to the rafts and the water. It was a frightening situation, but nobody had time for that. I ended up in the water for 20 minutes. A lot of us didn’t have time to put on survival suits, but I managed to get in to a raft and put a suit on.

“The helicopter crews were marvellous in getting everybody out of the sea. It was real daredevil stuff and they risked their lives for us. While I was in the raft, I watched the Coventry turn upside down. It was horrible to see your ship going ..down like that and it brought a lump to everybody’s throats.  When the bombs hit the ship there was a very, very loud thud, rather than a bang, followed by the blast. The Argentines may have got our ship but she went down fighting.

Nineteen men of the Coven­try’s complement of 294 died in the sinking.

Hugh Owen, 19, of Kenmore Close, told how he wept as Coventry sank. Hugh, a marine engineer mechanic, shared a cabin with Peter Bradford. He said: “All the blokes were coming out from where the bombs had hit and we got the wounded down to the sick bay. The ship started to list within about 10 minutes, and we were told to abandon ship. I jumped off the ship and swam to a life raft. There were about 35 of us in the life raft and we were in it for about an hour until we were air-lifted to another ship by helicopter. We were singing songs just to keep everyone’s spirits up. We watched the ship go over, and I just felt like crying.” 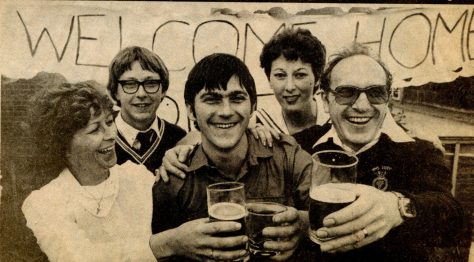 Cheer: Derek centre, and his family toast his safe return.

Derek Lincoln, 19, a former pupil of Cornelius Vermuyden school was serving on HMS Argent when she was sunk in an Argentine raid with the loss of 22 lives. But the horror of that mo­ment was partly forgotten as Derek rounded the corner of Bay Close, to find his parents’ house draped in patriotic bun­ting and dozens of neighbours welcoming him home. Derek said: “I’m glad I’m out of it now, but if I’ve got to go back I will. And I’ll be ready for it and this time I’ll know what to expect.” Derek, a weapons engineer, has been with the Navy for three years.

He was part of a team trained to repair equipment in the event of a disaster. But when disaster struck, it was soon realised that the Ardent was doomed. Survivors were transferred to another ship and 12 hours later the Ardent sank, taking the dead with her. Derek said: “I feel sorry for those who were killed. There were about 180 of us on board, so we all knew each other pretty well. And some. had joined up only two weeks before we went out.” 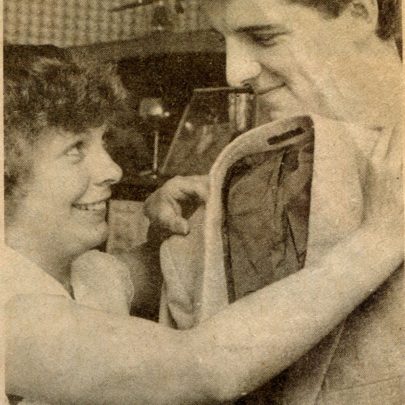 Kitting out: One of Peter's first jobs when he got home was to but some new clothes with wife Jill.