From the Humane Society 1991 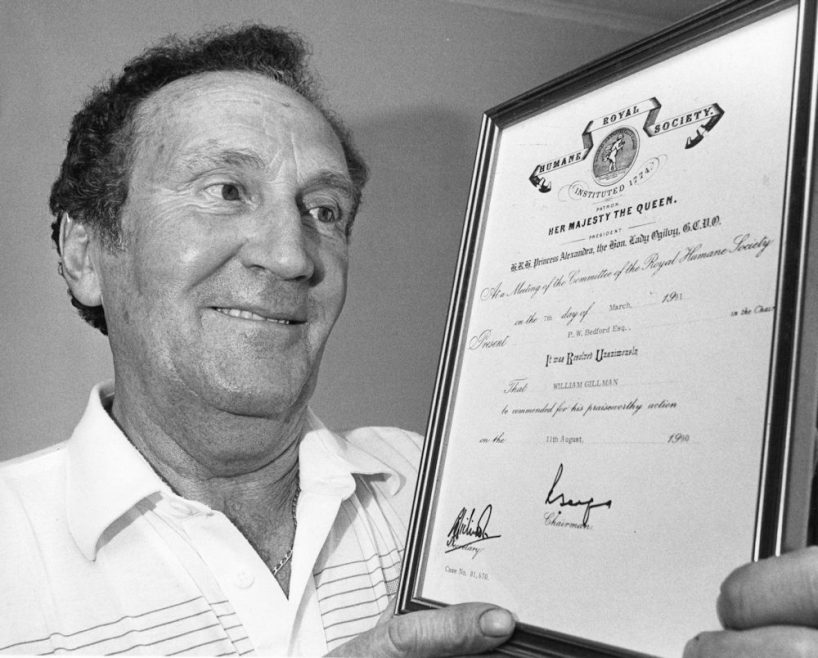 History repeated itself for heroic Bill Gillman who became a double lifesaver at the age of 64 when he helped pull a drowning man from a Wickford swimming pool 20 years after he plucked a man to safety off Canvey.

Semi-retired Bill, of High Street, Can­vey, was at a barbecue last August when he heard Rita Doughty screaming for help after her husband David sank to the bottom of the pool. At first the other guests thought he was merely swimming under the water, but when he failed to surface Bill and four others dived in and pulled him unconscious from the pool. Bill gave him the kiss of life before another guest took over until an ambu­lance crew and police arrived.

Their bravery was rewarded at Basil­don police station when they each received a rare certificate from the Royal Humane Society.

Bill, who has three children and eight grandchildren, said it was touch and go at the time whether Mr Doughty would pull through. He recalled: “Apparently he was a non swimmer, but I thought he was just swimming underwater. Then he seemed to be struggling and he was under for longer than I would like to have been. We got him out and I gave him resuscitation until a qualified chap took over from me.”

It was two decades ago when Bill, a shipping supervisor at London and Coastal oil wharves Ltd on Canvey, performed his first act of bravery. He was coming to the end of his shift when he heard that a man had fallen from the jetty into the water. A life raft was launched, but Bill jumped in to guide the struggling man and the other rescuers out of the way of an incoming ship otherwise they may have been crushed. The four reached the safety of a buoy, where they waited until a tug came to pick them up.

Modest Bill said: “You don’t think about it at the time because to me it doesn’t seem risky. I don’t have any fear and am quite fit and active. “I don’t think it was being heroic. I think of it like I was being a good neighbour to someone, though it was very nice to get the award.