In the summer of 1990 Canvey’s Jehovah’s Witnesses built themselves a new hall. It was built next to, what was then, Castle View School which can be seen in some of the photos.

The new building, as reported in local newspapers, was built by a new method of ‘fast build’. It took three days from start to finish. 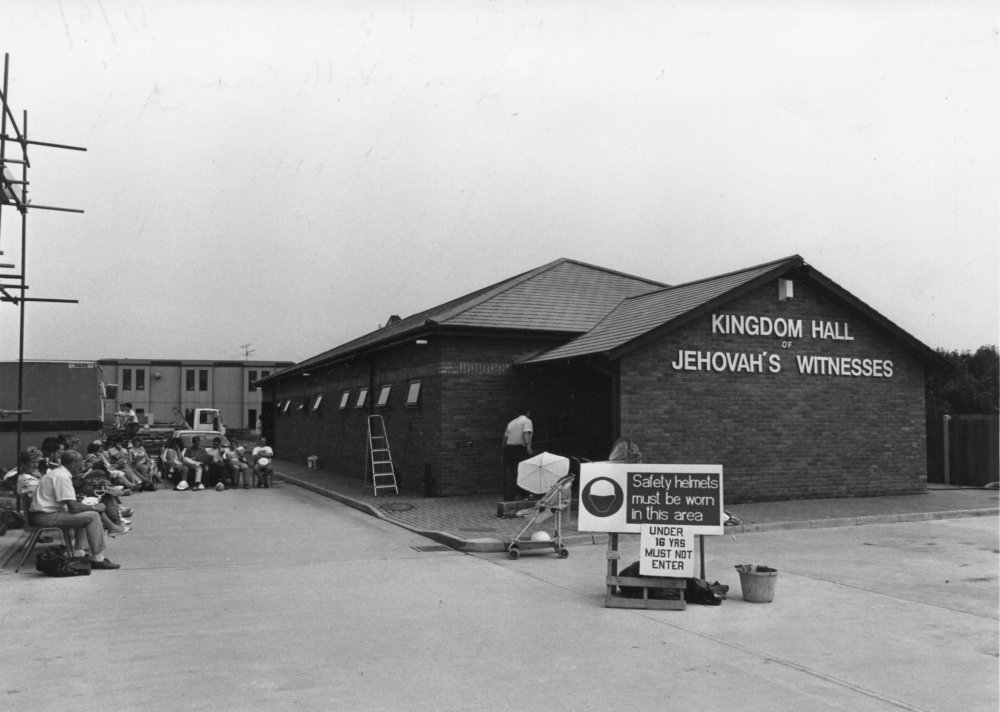 THE kingdom came in three days on Canvey — a Jehovah’s Witness Kingdom Hall.

The military-type operation started at 6am Friday to do a quick-build construction from the foundations. By Sunday afternoon it was finished with brick walls, pitched roof, curtains and carpeting complete with gas central heating, part air conditioning and a deaf aid induction loop system.

And by 3pm the hall was filled with 500 for the first bible discussion meeting, with a 150 overflow audience listening outside.

More than 400 workers took part, 200 of them from the Jehovah’s Witnesses national register of members with building skills who travel all over the county putting up these halls. The 200 were lodged with Canvey Wit­nesses, who had raised or promised £100,000 of the £150,000 cost and were fed and cared for by another small army of volunteers.

There were 20 administrative sections around the site giving back-up such as first aid, catering, security, trucking, safety, parking, equipment and signs. A big portable kitchen in a marquee served meals from 6am to midnight, begin­ning with bacon and eggs and including hot dishes like chicken risotto, barbecue specials and mixed grills.

The building materials arrived all week in Meppel Avenue on a plot behind Castle View School and near a new doctor’s surgery on the new Winter Gar­dens housing estate. And as they arrived, the local volunteers set up shops and got started on the carpentry and painting.

Mrs Roselynn Adams, a mother of four who lives on Canvey, was handling a paint brush for the first time in her life, staining doors when the Echo called. She said: “The Jehovah’s Witnesses are the first thing in my life, they give purpose to it. It’s something for the future that man cannot give us.”

In the kitchen tent boxes of peaches and salad stuff were being delivered as John Wood of Canvey, normally a carpet cleaner by trade, planned the feeding of the 400 over the weekend. He cooks over huge mobile gas burners that work by bottled gas. He said: “We are all dedicated people doing this.”

Nearby, Canvey mother-of-five Kathy Hughes was getting cracking at the plumbed-in sinks. Two of her older children were helping the adults while the younger ones spent the weekend in a crèche in the school hall, rented so that families could help and have the children looked after.

Mr Geoff Andrews, presiding overseer of Canvey, said: “There’s a spirit of unity and zeal that gets all this done. “Our membership has grown and we have rented halls for more than 30 years on Canvey. “Our local volunteers laid out the car park and got the foundations ready.”

Were you part of the group that were there on the day? Please comment below.