In the King Canute

On special in the King Canute a pint of blood!! 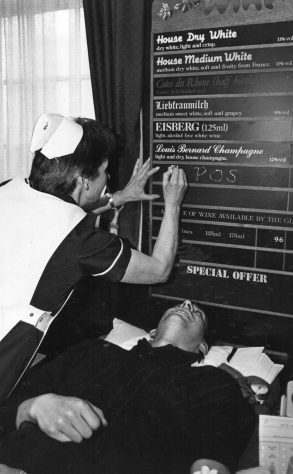 Vintage: A tally goes up on the wine list board

Regulars at a Canvey pub are getting used to a different sort of pint when they pop in for a quick one — a pint of blood. The unusual location for a blood donor session is at the King Canute in Canvey Road.

A pack of savoury titbits is replaced with a pack of needles and instead of rolling up to the bar they roll up their sleeves. North East Thames Regional Transfusion Centre sends along a mobile unit to the pub and the lounge bar area is put aside for a day to allow people to donate a pint of blood.

Landlord Gary Robinson gave the go-ahead for the unit to set up. He said: “You could say it is an unusual location but a lot of people have been location but a lot of people have coming in to give blood. Unfortunately I cannot give any because I have recently had a tetanus injection. If I had, it would have been the 12th time I have given blood. My wife cannot give any either because she has recently had an operation, but the rest of the staff on duty will be giving a pint.”

Mr Robinson said a pub session six months ago collected 112 pints. Many employees of the nearby industrial estate went along to give blood. Tea or orange and a biscuit was offered afterwards. For peo­ple who felt a rest was called for, there was a bed.

Sister Gill Scott said: “People have been willing to give blood and we have had no problems.” Mr Chris West, deputy donor services manager at the trans­fusion centre, said blood banks were full and coping with demand. Last year they held 1,600 sessions throughout Essex. He said: “We tend to discourage people from drinking before they give blood and there is a disclaimer board at each session which informs people who should not be donors. “This includes people who have recently had flu or an infectious disease or are under medication.”

After the donor session, the regulars got back into their more usual upright stance and soon topped up some of those lost pints.

zoom
Jackpot: A donor attended to by the fruit machine
Echo Newspaper Group
zoom
Refreshment: Afterwards, a cup of tea and a biscuit pnly for David Pardaram, Derek Hayford and Barry Shelley, from the Charfleets industrial estate.
Echo Newspaper Group