From an article in the Bakers’ National Association Review dated 6th February 1953. 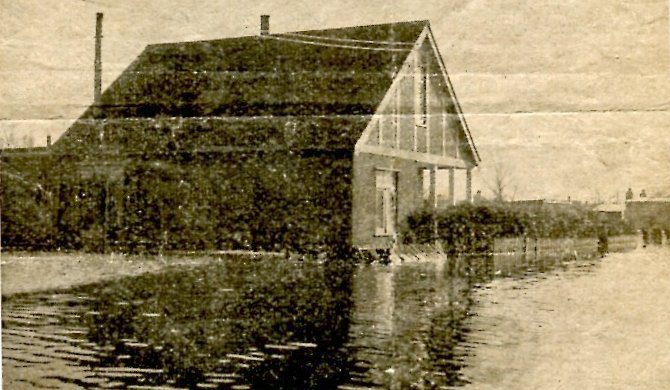 The home of Mr Aubrey Stevens, who assists his father in Canvey Island’s only bakery, stands deserted, surrounded by flood water.

Part of the old alliterative rhyme, “dealing destruction, desolation, doom” came to mind as I wandered over Canvey Island while the flooding was at its height on Sunday and Monday. My first thought was: What has happened to Stevens’ Bakery?—the, only one on the island.

It was not possible to get an answer on Sunday. 1 made an attempt to reach the premises, which are in the part of the island known as Leigh Beck. But as it was high tide at the time and the flood-waters were racing along at an ominous speed, I was warned that it was foolish to try to get to the spot, which was on the southern flank of the torrents then pouring through the breached sea-wall.

Discretion postponed the attempt till the next day, by which time the floods had subsided appreciably from the road in that locality; in fact, a long stretch was now dry and, but for the invading sea each side, showed little trace of the inundation only a few hours earlier.

When the bakery was reached—it trades under the name of the Reliance, has three shops in different parts of the island; and is run by Mr. Oliver C. Stevens, assisted by his son Aubrey— there was no sign of life. The shop and sub-post office which comprise the busi­ness were closed, as were most business premises on the island. 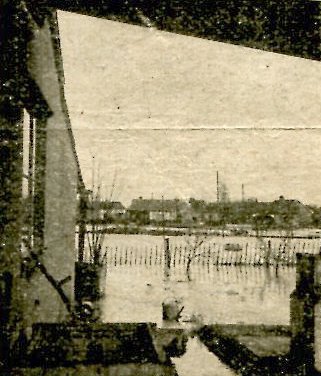 Knocking at the home of Mr. and Mrs. Stevens, sen., close by, brought no
response: ther…….. (not readable) evacuation . . . the back walls of the house were being washed by the floods, in which two men were rowing a boat in a bid to reach their partly submerged home.

And in the wind-whipped waters immediately behind the house and stretching beyond as far as one could see, was debris bobbing up and down to the dictates of the gusts.

On the opposite side of the road to the bakery was the home of Mr. and Mrs. Aubrey Stevens, nestling despond­ently in water three or four feet deep. They, too, had gone; no one seemed to know where, and the hastily organised welfare organisation, with its extremely limited means of communication, could not trace them.

Both the Stevens families have since been located. They are safe at an address in South Benfleet.

A link with the business of Stevens and Son, who are members of Southend Association and the N.A., is Mr. Palmer, who, with Mr. Oliver Stevens, founded the business. Now 86 years of age, he has been living for some years in retire­ment near the bakery. But he had not been traced by Wednesday.

The island, with its 6,350 acres and normal population of over 11.000, has in recent years developed into a holiday resort, and catering is one of its princi­pal industries. Bread and confectionery are sold at a great number of shops, though most of it is “imported.”

Passed to us by Graham Stevens