You are here: HomenextHistorynextThe Great FloodnextPapers and ReportsnextI Wish A Thousand Eyes Could See These Heroes

I Wish A Thousand Eyes Could See These Heroes 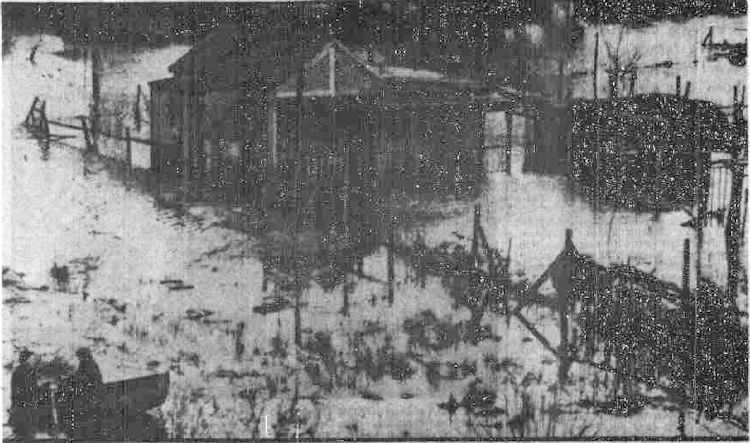 I wish that the world had a thousand eyes so that it could have seen what my eyes saw in stricken Canvey Island. I wish that Winston Churchill would visit Canvey Island, Great Wakering and Foulness, so that his voice, with its magic of language could encircle the globe with a noble story nobly told.

Death had struck in the night. Spring tide, full moon and raging storm had driven the sea to madness. For 300 years the sea had held at bay and in an hour it reclaimed the land that had been taken from it.

And how did the people confront this revenge of the cruel sea? They met it as only the English meet disaster, with kindness, with simplicity, with incredible adaptability and with silent courage.

I stood in a room by a policeman who was answering questions from an endless queue that filed past him. Their faces were pale with sleeplessness and their eyes were dark with foreboding. Almost diffidently, as though aware of the pressure on him, they asked if he had any news of their relatives. Had they looked on the lists? Yes.

“The lists are not complete.” he said gently. “They are being added to all the time.”

They smiled their thanks, but it was only because he had been so human. With weary steps they moved away to make room for the next questioner.

One of the queue was a young soldier on leave from Germany. He had lost his uniform in the mad raid of the waters and he had come to see if he could be of any help. Close behind him was a man in a grey suit. “I can supply a helicopter,” he said. “Will you tell me where to report?”

A little way up the road was a new secondary school which by a caprice of fate was to have been opened that day. Instead of children it was filled with homeless survivors. Working among them were members of the WVS, serving food and above all, distributing that English solace – a nice cup of tea.

A woman with a small son told me that every stitch of clothing she had on was given to her by the WVS “and there were comics for the boy.” The boy nodded acquiescence. Life had taken on new delights for him.

Three workmen gave me their story. The torrent of water had invaded their home on the island. The pressure had thrust the floor upwards until it collapsed. Hanging on to the roof, they waited until help came. “The noise was terrific” they said, “and the water smelt queer.” That was as far as they would venture into the realm of heroics.

Outside in the road a funeral cortege wended its sombre way to the cemetery. Someone had died before the storm.

We drove along a flooded roadway and saw a bungalow nestling in six feet of water. Fair Lawn was its name, but there was no lawn to be seen. Outside a shop was a stuffed bear, and into its paws someone had placed a placard: “Bear up Canvey will live again.”

On a tiny isolated piece of land 12 cows were huddled like a jury considering their verdict. Far across the fields boatmen were taking bodies from the water. Outside a sunken house a man and his wife stood watching their former home, while their dog nest lived again, or perhaps it was never dead. led close by his master’s feet.

All across that stricken coast were unknown men and women who had responded to the call, asking nothing for themselves but to be of service. The spirit of 1940 lived again, or perhaps it was never dead. This brave, enduring people, this gentle breed, this England.

Please click on the pictures in the gallery below to read the newspaper cutting for yourself. 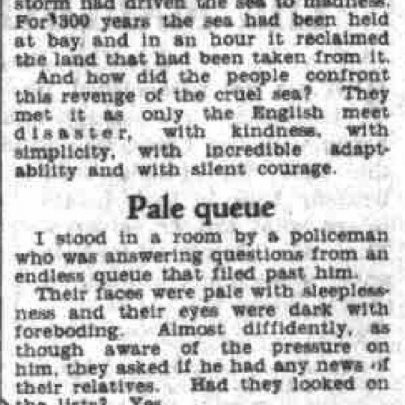 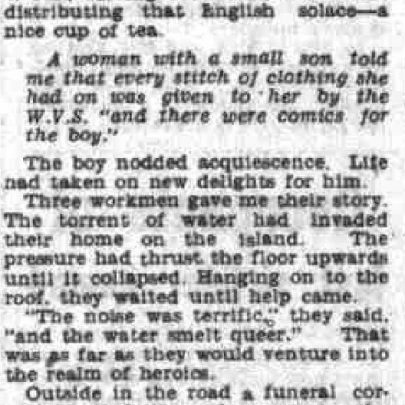 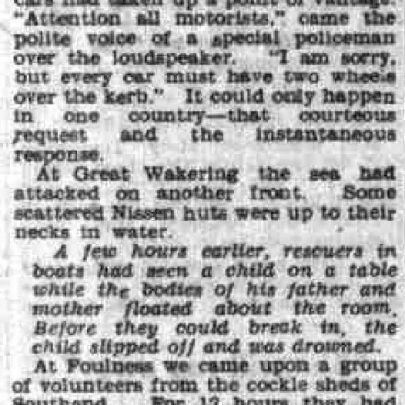