John Tindale's exploits during the Flood

Sent to us by his daughter Pauline Gashinski


THE STORY AN AVELEY MAN WOULD NEVER HAVE TOLD

This is one story out of the many, that came from Canvey Island on a black Saturday night. It is the story of a Unit man who did more than most, in that emergency – and, had he been on the site, we might never have heard of it. For Mr. John Tindale (a Unit pipelayer at Aveley) isn’t in the habit of recounting his exploits; so much so that very few of his friends know, even now, that he once won a D.F.C. as navigator of a bomber.

Because he was temporarily away, salvaging some of his goods from his home, his friend and neighbour, Mr. James Morgan (also a Unit employee at Aveley) was able to speak for him, and say what he had seen.

Canvey awoke in the middle of a stormy but moonlit night to realise that the wall had been broken. The water at the time was rising high to Mr. Tindale’s house, but somehow he got his family to Mr. Morgan’s on rather higher ground. They waited for help, but no boats were in sight.

Somewhere, Mr. Tindale found a floating rainwater storage tank, complete with tap, and in this improvised vessel he pushed those who were unable to help themselves . . . . a blind man and his wife; several families of children; and a large number of animals. “I know when he started”, says Mr. Morgan, “but I don’t know when he finished. An hour or so in icy water and I was ‘sold out’, but he was still going back for more . . . .”

This is a picture of some of the Canvey men who were back on site a few days after the floods. 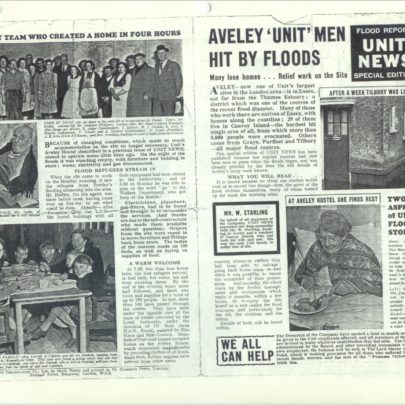 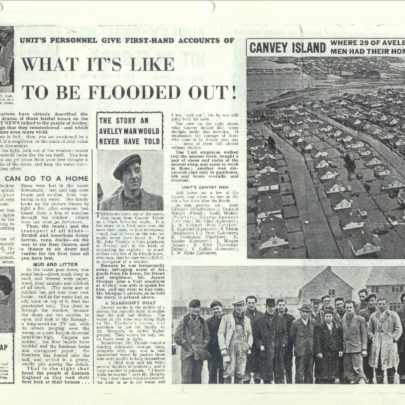