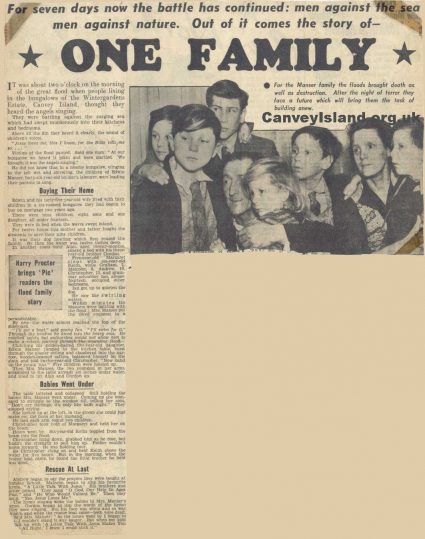 It was about two o’clock on the morning of the great flood when people living in the bungalows of the Wintergardens Estate, Canvey Island, thought they heard angels singing.

They were battling against the surging sea which had swept murderously into their kitchens and bedrooms.

Above all the din they heard it clearly, the sound of children’s voices.

Victims of the flood paused. Said one man; ‘At our bungalow we heard it plain and were startled. We thought it was angels singing’.

He did not know that in a nearby bungalow, clinging to the loft wet and shivering, the children of Edwin Manser, forty-six-year-old builder’s labourer, were leading their parents in song.

Edwin and his 45 year old wife lived with their children in a six roomed bungalow they had begun to buy on mortgage two years ago. There were nine children, eight sons and one daughter, all under fourteen. They were in bed when the waves swept inland. For twelve hours this mother and father fought the elements to save their nine children.

It was their dog howling which first roused the family. By then the water was twelve inches deep. In another room baby Alan, aged twelve months shared a bed with his three year old brother Gordon. Five year old Margaret slept with six year old Keith, while Graham, 7, Malcolm, 8, Andrew, 10, Christopher, 12 and grammar schoolboy Ian, almost fourteen occupied other bedrooms. Ian got up to quieten the dog. He saw the swirling waters. Within minutes the Mansers were battling with the flood. Mrs Manser put the three youngest in a perambulator. By now the water almost reached the top of the sideboard.

‘I’ll get a boat,’ said young Ian, ‘I’ll swim for it.’ Through the window he dived into the heavy seas. He reached safety but authorities would not allow him to make a return journey through the mounting flood.

Clutching his golden haired 5 year old daughter Edwin Manser jumped onto the Kitchen table, burst through the plaster ceiling and clambered onto the narrow, wooden beamed rafters, balanced himself on the slats and told 12 year old  Christopher, ‘Now hand up the young ‘uns’. Five children were hoisted up. Then Mrs Manser, the two youngest in her arms, scrambled to the table already six inches under water, and tried to lift Alan and Gordon up. The table tottered and collapsed. Still holding the babies Mrs Manser went under. Coming up she managed to struggle to the window sill, telling her sons, ‘Don’t cry Darlings, its only like bath night.’ They stopped crying.

She looked up at the loft, in the gloom she could just make out the form of her husband. He had each arm round two children. Christopher took hold of Margaret and held her on the beam. Hours went by. Six year old Keith toppled from the beam into the flood. Christopher hung down, grabbed him as he rose, but hadn’t the strength to pull him up. Father couldn’t move forward. He was holding four. So Christopher clung on and held Keith above the water for five hours. But in the morning when the rescue boats came, he found the little brother he held was dead.

Andrew began to say the prayers they were taught at Sunday School. Malcolm began to sing his favourite hymn, ‘A Little Talk with Jesus.’  His brothers and sister joined. They sang ‘O God Our Help in Ages Past’ and ‘He who would valiant be. ‘Then they sang ‘Yes Jesus loves me’.

The hymn singing woke the babies in Mrs Manser’s arms. Gordon began to lisp the words of the hymn they were singing. But his face was white and so was Alan’s and when the rescue boat came – both were dead.