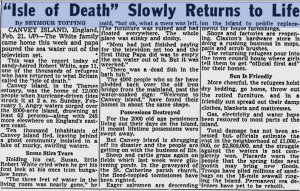 Canvey Island, England, Feb. 21. —The White family came home this week and papa poured the sea water out of the television set.

This was the report today of sandy-haired Robert White, age 11, one of the thousands of refugees who have returned to what Britain called the “Isle of death.”

Canvey Island, in the Thames estuary, was the home of 12,000 people when hurricane-driven tides struck it at 2 a. m. Sunday, February 1. Angry waters surged over the 8000-acre island, drowning at least 62 persons—along with 245 more eleswhere on England’s east­ern coast.

Ten thousand inhabitants of Canvey island fled, leaving behind a ghost community isolated in a lake of murky, swirling waters.

Holding his cat, Susan, little Robert White cried when he got his first look at his once trim bunga­low home.

“The three feet of water in the living room was nearly gone.” He said, “but oh, what a mess was left. The furniture was ruined and had floated everywhere. The whole place was stinky and sloshy.

“Mom had just finished paying for the television set too and the first thing Papa did was to empty the sea water out of it But it was wrecked.”

“There was a dead fish in the bath tub.”

The 4000 people who so far have plodded back over the old iron bridge from the mainland, past the water-soaked sign: “Welcome to Canvey Island.” have found their homes in about the same shape.

For the 2000 old age pensioners living out their days on the Island, it meant lifetime possessions were swept away.

But Canvey Island Is shrugging off its disaster and the people are getting on with the business of life.

Sheep and cattle graze again on fields which last week were glis­tening ponds. In the graveyard of the St. Catherine parish church, the flood-toppled tombstones have been righted.

Eager salesmen are descending on the island to peddle replace­ments for house furnishings.

Shops and factories are reopening. Claxton’s hardware store is doing a rushing business in mops, pails and scrub brushes.

The returning refugees pour into the town council house where girls tell them to get “official first aid” for their homes.

More cheerful, the refugees hoist dry bedding, go home, throw out the rotted furniture, and in a friendly sun spread out their damp clothes, blankets and mattresses.

Gas, electricity and water hove been restored to most parts of the Island.

Total damage has not been as­sessed but officials estimate the cost in the neighborhood of £1,000,000 or $2,800,000 and the struggle against the waters is not com­pletely won. Placards warn the people that the spring tides next month may bring new floods. Troops have piled millions of sand-bags on the 18-mile seawall ringing the island. Permanent sea defenses have yet to be rebuilt.