The following was recorded in the 6th February edition of the Southend Pictorial. 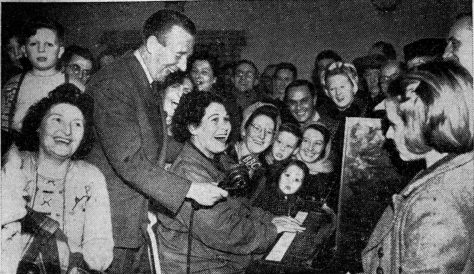 Wilfred Pickles is seen with Canvey evacuees in this picture as they forget their worries and join heartily in a sing-song round the piano.

To bring home to the public the real extent of the flood disaster at Canvey, the B.B.C. on Thursday sent Wilfred Pickles, famous compere of the ” Have a Go ” programme, to Benfleet Secondary School, largest reception centre for refugees from the Island, to make a special programme among the evacuees.

It will be broadcast over the Light Programme at 11 a.m. on Sunday, in place of the repeat broadcast of “Can I Come In?” Wilfred’s current radio series. Wilfred interviewed a dozen or so evacuees, encouraged chil­dren to sing over the microphone, and entertained a crowd of about 300, which packed into the school theatre.

Recording for the programme was due to begin at 2 p.m. By 1.30 p.m. the hall was full, and officials and B.B.C. engineers had great difficulty in re­arranging the seating. Even­tually the actual interviews were conducted in the centre of the hall.

Before recording started, Wilf explained the reason for the broadcast. “When this pro­gramme goes out on Sunday, the rest of the country will real­ise what has happened. This is far worse than a pit disaster, which always gets immediate sympathy. We hope to get that over to the public”

The audience were “warmed up” with community singing, accompanied on the piano by Josie Jarvis, of Woodhurs Road, Canvey, herself a flood victim, and a semi-professional entertainer. “Their first song, selected as a greeting to flood victims in other parts of the country, was ” I Wouldn’t Leave My Little Wooden Hut for You.”

Among those interviewed was Mr. E. A. Brown, of Long Road, Canvey. In the early hours of Sunday, Mr. Brown blocked up the doors of his house with dirt, to keep the floods out. The following day, he took his wife and three children (Joy 13, Terry six, and Wendy three) to London, and then re­turned to help with the rescue operations. He told Wilf: “I have been working getting bodies out, moving timber, and helping generally. I am still living in my house on the Island.” Duffle-coated, and wearing thigh boots, Mr. Brown left the school as soon as his part of the broadcast was finished, to return to work-

Six-years-old John Martin, of Woodhurst Road, Canvey, sang “Me and My Teddy Bear” Into the microphone, and his mother, Mrs. Peggy Martin, with her sisters, Elsie and Syl­via Angerstein, of North Avenue, Canvey, also sang.

Mrs. D. U. Lemon, of Thlsselt Road, Oyster Fleet, Canvey, told Wilf she heard water rushing into the house, so waded out and rescued her mother and her pet cat.

Other people interviewed were Mrs. Margaret Boobyer, aged 73, of Park Lane, Leigh Beck, Canvey, who told how her grandson carried her down the road until they were picked up. Mr. Bill Starling, who lost his wife and son in the floods; Mrs. R. Hedges, of Goirle Avenue, Canvey, who spent the night of the floods in a loft; Mr. A. J. Evans, headmaster of the school, and Mrs. G. Blackwell, of North Avenue, Canvey, whose fireman husband spent hours on rescue work.

A recording of 13-years-old Yvonne King, of Lakeside Corner, singing “That Old Soft-shoe,” was also made.