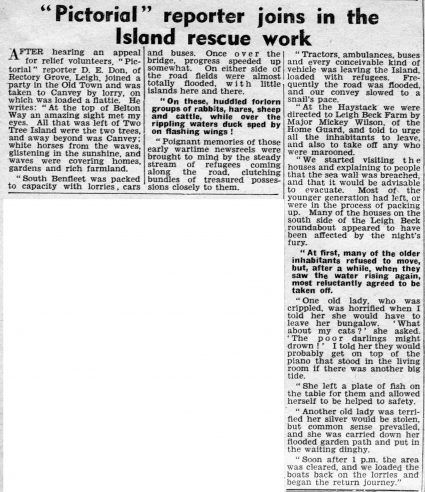 After hearing an appeal for relief volunteers, ” Pic­torial” reporter D. E. Don, of Rectory Grove, Leigh, joined a party in the Old Town and was taken to Canvey by lorry, on which was loaded a flattie. He writes: “At the top of Belton Way an amazing sight met my eyes. All that was left of Two Tree Island were the two trees, and away beyond was Canvey; white horses from the waves, glistening in the sunshine, and waves were covering homes, gardens and rich farmland.

“South Benfleet was packed to capacity with lorries, cars and buses. Once over the bridge, progress speeded up somewhat. On either side of the road fields were almost totally flooded, with little islands here and there. On these, huddled forlorn groups of rabbits, hares, sheep and cattle, while over the rippling waters duck sped by on flashing wings!

Poignant memories of those early wartime newsreels were brought to mind by the steady stream of refugees coming along the road, clutching bundles of treasured posses­sions closely to them. Tractors, ambulances, buses and every conceivable kind of vehicle was leaving the Island, loaded with refugees. Fre­quently the road was flooded, and our convey slowed to a snail’s pace. At the Haystack we were directed to Leigh Beck Farm by Major Mickey Wilson, of the Home Guard, and told to urge all the inhabitants to leave, and also to take off any who were marooned.

“We started visiting the houses and explaining to people that the sea wall was breached, and that it would be advisable to evacuate. Most of the younger generation had left, or were in the process of packing up. Many of the houses on the south side of the Leigh Beck roundabout appeared to have been affected by the night’s fury. “At first, many of the older inhabitants refused to move, but, after a while, when they saw the water rising again, most reluctantly agreed to be taken off. One old lady, who was crippled, was horrified when I told her she would have to leave her bungalow. ‘What about my cats?’ she asked. ‘The poor darlings might drown! ‘I told her they would probably get on top of the piano that stood in the living room if there was another big tide. She left a plate of fish on the table for them and allowed herself to be helped to safety.

“Another old lady was terri­fied her silver would be stolen, but common sense prevailed, and she was carried down her flooded garden path and put in the waiting dinghy.

Soon after 1 p.m. the area was cleared, and we loaded the boats back on the lorries and began the return journey.”