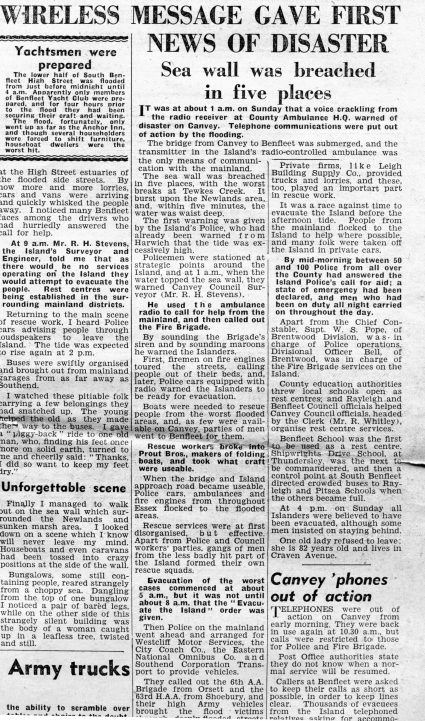 It was at about 1 a.m. on Sunday that a voice crackling from the radio receiver at County Ambulance H.Q. warned of disaster on Canvey. Telephone communications were put out of action by the flooding. The bridge from Canvey to Benfleet was submerged, and the transmitter in the Island’s radio-controlled ambulance was the only means of communi­cation with the mainland.

The sea wall was breached in five places, with the worst breaks at Tewkes Creek. It burst upon the Newlands area and, within five minutes, the water was waist deep. The first warning was given by the Island’s Police, who had already been warned from Harwich that the tide was excessively high.

Policemen were stationed at strategic points around the Island, and at 1 a.m., when the water topped the sea wall, they warned Canvey Council Surveyor (Mr. R. H. Stevens). He used the ambulance radio to call for help from the mainland, and then called out the Fire Brigade. By sounding the Brigade’s siren and by sounding maroon; he warned the Islanders.

First, firemen on fire engine toured the streets, calling people out of their beds, and later, Police cars equipped with radio warned the Islanders to be ready for evacuation.

Boats were needed to rescue people from the worst flooded areas, and, as few were available on Canvey, parties of men went to Benfleet for them. Rescue workers broke into Prout Bros., makers of folding boats, and took what craft were useable. When the bridge and Island approach road became useable Police cars, ambulances and fire engines from throughout Essex flocked to the flooded areas.

Rescue services were at first disorganised, but effective. Apart from Police and Council workers’ parties, gangs of men from the less badly hit part of the Island formed their own rescue squads.

Evacuation of the worst cases commenced at about 5 a.m., but it was not until about 8 a.m. that the “Evacuate the Island” order was given. Then Police on the mainland went ahead and arranged for Westcliff Motor Services, the City Coach Co., the Eastern National Omnibus Co. and Southend Corporation Trans­port to provide vehicles. They called out the 6th A.A. Brigade from Orsett and the 63rd H.A.A. from Shoebury, and their high Army vehicles brought the flood victims through deeply-flooded streets to the Haystack Corner, where the buses waited. Private firms, like Leigh Building Supply Co., provided trucks and lorries, and these, too, played an important part in rescue work.

It was a race against time to evacuate the Island before the afternoon tide. People from the mainland flocked to the Island to help where possible, and many folk were taken off the Island in private cars. By mid-morning between 50 and 100 Police from all over the County had answered the Island Police’s call for aid; a state of emergency had been declared, and men who had been on duty all night carried on throughout the day.

County education authorities threw local schools open as rest centres, and Rayleigh and Benfleet Council officials helped Canvey Council officials, headed by the Clerk (Mr. R. Whitley), organise rest centre services. Benfleet School was the first to be used as a rest centre. Shipwrights Drive School, at Thundersley was the next to be commandeered, and then a control point at South Benfleet directed crowded buses to Ray­leigh and Pitsea Schools when the others became full.

At 4 p.m. on Sunday all Islanders were believed to have been evacuated, although some men insisted on staying behind.

One old lady refused to leave; she is 82 years old and lives in Craven Avenue.