A kind gift from a stranger. 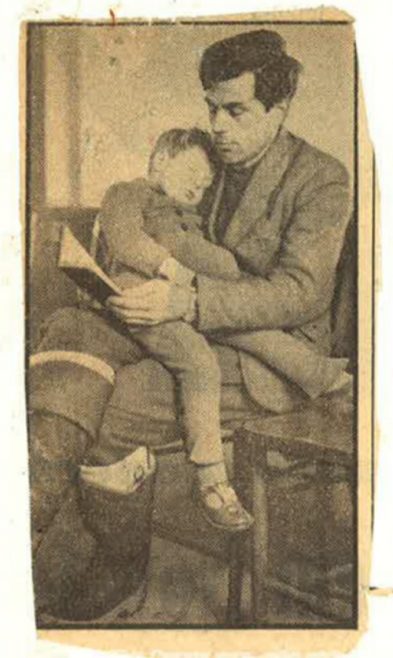 Photo of Dad and Trevor.

In the second week after the Flood a photo of two members of our family was printed on the front page of the Daily Express. It showed my Dad, Aubrey at a service at Canvey Baptist Church with my youngest brother Trevor, then aged 3 yrs, fast asleep on his lap. My Dad kept a cutting of the photo and attached text which I had often seen during his lifetime and also shortly after his death in 1986. However when his large amount of local and family history papers and artefacts were dispersed this little piece of paper seemed to have disappeared. In more recent times ,especially since the start of the Archive, I have wondered about it’s whereabouts.

On a recent visit to my brother Trevor’s home near Banbury whilst discussing family history, as you do, I asked him if he had any ideas where the cutting might be, he immediately replied.” I think I’ve got it somewhere.” He eventually unearthed it in a file amongst a lot of family and other local newspaper cuttings.

With this discovery  a story completeley unknown to us unravelled. This was not the same photo that had been seen before. The text had been cut off and this particular newspaper cutting had travelled some distance and had it’s own story to tell. According to two  accompanying letters (see gallery below) a gentleman in Cheshire was so moved when he saw the image of Dad and Trevor that he sent the cut-out photo and a postal-order for 40/- with a request to the Daily Express to if possible pass this gift to the unknown man in the photo (Dad had declined to give his name). As can be seen the Express acted very promptly and sent the money and photo on to the Canvey Island Urban District Council who in turn,amongst the turmoil in the aftermath of the Flood, also on recognition of Dad swiftly passed everything on to him.

An amazing story of good communication and a very generous gift ( 40/- could have  been almost a week’s wages in those days) from a stranger which came as a pleasant surprise to our family more than 60 yrs after the event.

Please click on the pictures in the gallery below to read the letters. 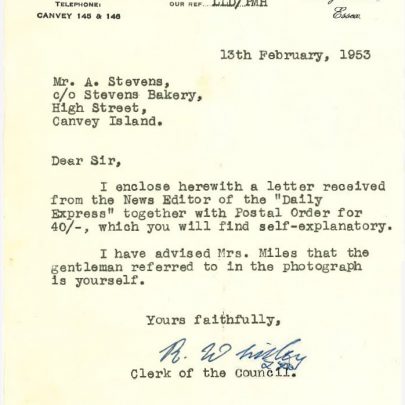 The letter from Mr Whitley, Clerk of C.I.U.D.C.
Stevens family 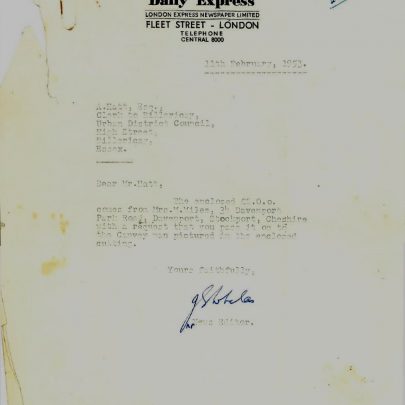 Letter to the Council from the Daily Express.
Stevens family