I survived to tell the tale 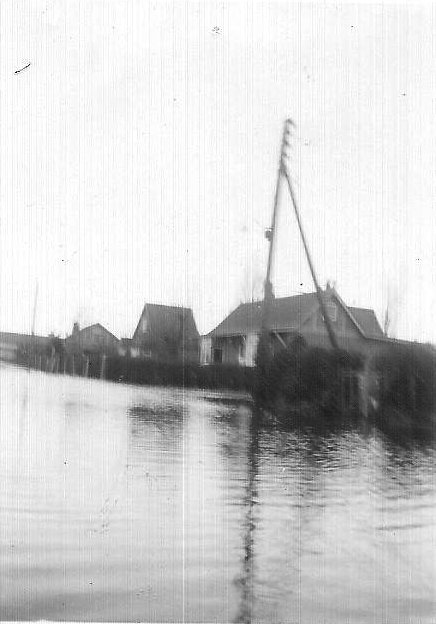 Our bungalow “Glenroy” on the corner of Northfalls and Springfield Road

I’m a survivor of the 1953 floods and I remember the events of that January night as though it happened yesterday. I remember most things and my late mother filled me in over the years. Living in our bungalow “Glenroy” were mum and dad – Stella and Sid Bones with my sister Barbara and I.  I was 5 ½ years old.

My story begins with the howling wind outside my bedroom window when getting ready for bed that night. We lived in Springfield Road at Leigh Beck, known as The Point, the most easterly point of the Island and the furthest distance from the only road off the Island at that time across the bridge. The sea wall was about 500 yards from our bungalow on one side and maybe 1500 yards on the other side. It was hard to get to sleep with the wind and rain battering the windows and the trees rustling in the wind. My sister and I went to bed as usual unaware of what dangers might be looming.

I remember the sound of something or someone furiously banging on our back door and then the windows. It’s was the old lady Mrs Savage dressed in her nightclothes, who lived in Rose Cottage opposite ours. She was shouting and screaming “the sea wall has broken, the sea is coming down the road, get out, the sea is coming”. This was 2 o-clock in the morning and with no street lights working I don’t know how she found her way to ours, especially as the road was already under water and filling up dramatically. I don’t know what happened to her that night although I’m sure my parents would have helped her evacuate alongside us. She did survive and returned to Rose Cottage over the next few weeks. 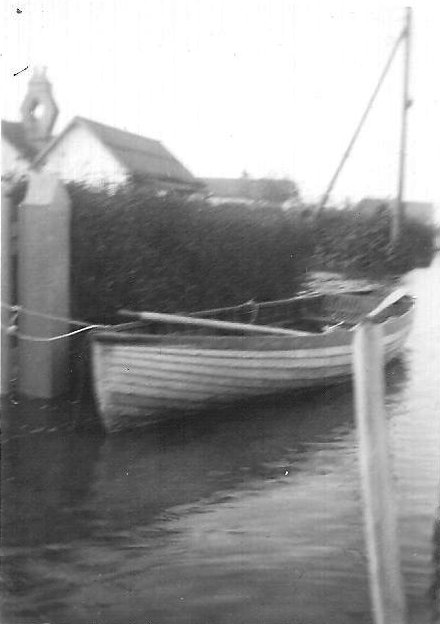 I remember mum and dad rushing around the house in a kind of mad panic and putting clothes and things in a holdall of some kind. By now my sister Barbara aged two years old was awake and crying. I can’t remember the next few hours but around dawn we left through our back door and us girls were carried down the garden and lifted over the fence of our neighbours Beryl and Bert Green and over another fence to where we joined a group of other evacuees from the road behind us. From somewhere there appeared a couple of dinghies waiting for us round by our front gate. I imagine that volunteers or the army had been sent to our part of the island due to its vulnerability and that it was now our turn to be evacuated. It must have been awful for mum and dad to stay put in the bungalow knowing the water was not subsiding.

We were helped into a dinghy by some people and someone rowed us to the slightly higher ground of Park Lane. Most areas at this part of the Island had dykes alongside the roads, put in many years ago by the Dutch settlers, ironically to take away any excess water. On our dinghy journey we passed an Army truck which had obviously overshot the road and had gone head first into the dyke and almost overturned. Perhaps the reason we had such a long wait for help. From there we walked along the flooded Point Road towards Maurice Road where an Army truck was waiting for us.

There I remember being literally hauled onto the back by the soldiers and sat waiting with lots of others for my mum, dad and sister to join me. It was cold and we were all very wet. We were taken towards the Haystack area where we walked to my grandparents’ bungalow in Lionel Road to check if they were safe. I believe they were in the throes of making their own evacuation arrangements but nevertheless they came with us on the next Army truck where we were picked up in Long Road. 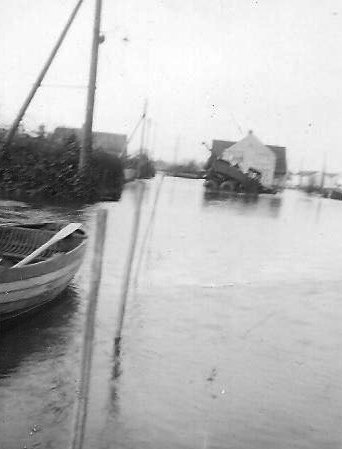 We were then taken to the Benfleet Infants School in the High Road. How the truck was able to get over the bridge I really don’t know but I guess the tide may have gone down slightly by then. On arrival at the school we were given blankets and I remember someone offering my mum a small pile of dry clothing for us to change into to and take with us – including vests and liberty bodices with rubber buttons on them. I can still remember that pile of clothes and thinking at that young age, how could we wear something that has already been worn by someone else. We were given hot drinks and food. Babies were given nappies and bottles of milk. I remember sitting on the floor up against the wall alongside lots of other mothers and children.  We seemed to be there for hours.

Eventually we were able to make our way to Benfleet railway station where we boarded a train to Fenchurch Street and onwards to my other grandparents’ flat in Middlesex. They had been worried, with no telephones in those days they were unaware of our imminent arrival. Living in such a small flat there was literally no room for us but we were put in touch with a work colleague of my Nan called Laura in Brentford who was able to put us up for six weeks.  I remember there was an older boy living there too and I was given a pair of his striped pyjamas to wear. I hated them! They had mother of pearl buttons – I haven’t been able to bear to touch those buttons since. My dad did not come with us as be needed to stay behind to feed and look after the chickens!! 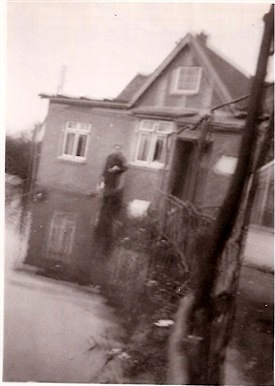 Dad – Sid Bones at the back of Glenroy

When we returned home again six weeks later it was to a very muddy and damp bungalow. I also remember someone coming into school with some “goody bags” for all the children which contained things like soap, flannels, toothbrush and toothpaste and some little toys to play with. To this day I can still remember the smell of those goody bags. Our lovely teacher at the time was Mrs Lording and I remember she made a great deal of fuss over us and welcomed us back to Leigh Beck School.

I have feared water all my life and when it is very windy outside I still remember that dreadful night. It’s only now that I’ve written this that I realise the acts of heroism of that night; the old lady probably saved our lives; the people who rescued us with a dinghy; the Soldiers who evacuated us in their trucks; the kind people of Benfleet who took us under their wing and donated those clothes, and of course my mum and dad whose first thoughts were to make sure us girls (and the chickens) were safe.