George Hoad and his mother's cat

Letter published in the Bulletin in 1983 written by George Hoad

It started as a normal Sunday. My wife and I had just sat down to our Sunday dinner when there was a loud knocking on the front door. I went to the door and found my mother collapsed on the door step. I took her into the front room and all she said was, “It’s all gone, the bungalow has floated away, it’s all water.” We calmed her down, gave her a cup of tea and then she told us what had happened.

She woke up about eight am got out of bed to make a cup of tea and put her feet in water. She didn’t know what had happened and thought the water tank had leaked in the kitchenette. She went into the living room and on opening the curtains all she could see was water everywhere. Some of the bungalows were up to the roofs in water. She calmed down a bit, got dressed and went onto the veranda. She shouted out “Is anyone there?” but got no answer. Then she heard a call and saw a man in a boat who was rowing towards her. She got into the boat and he rowed her as near as he could to the main road. She then had to walk to the station. She was concerned about her jewellery but her main concern was her cat so I said I would go down and see what I could do.

I got dressed and got on my motor cycle and went to Canvey. I parked my bike and started to walk to the Island but was stopped by a policeman who asked where I was going. I told him what had happened and that I was going for the cat etc. but he said “You can’t go now the tide is coming in”. So I just had to go back home. I told my mother what happened and said I would go again in the morning.

I went the next morning and started to walk, I had to walk all the way nearly to the Admiral Jellicoe pub when I saw a boat in a side road. I had just started to push it into the water when about six men came up and said they wanted it to rescue people from their bungalows. I didn’t want to lose it so I helped them. I helped to rescue a number of people but as time was getting on I had to leave them and make my way as best as I could. I walked to the Jellicoe pub went round the back but again all water.

I tried to walk to the bungalow but had to give up with water up to my chest. I was about to leave when I heard a shout and saw a man rowing towards me. I asked him if he would take me over to my mother’s bungalow. He said “get in” and started rowing. He stopped on a slight rise where there was no water and said I would have to walk. The sight that greeted me I will never forget. There were dead chickens, rabbits, cats everywhere. Bungalow doors windows wide open, not a soul in sight, not a sound, the water up to my chest.

Having got into the bungalow again in water I collected my mother’s jewellery then looked for the cat. It was not in the bungalow I opened the back door and found the cat on top of the toilet roof, I managed to get it down and put it in a bag I had taken with me. I had to walk to the main road again which took me some time as I had to find high ground, then had to walk to the station. 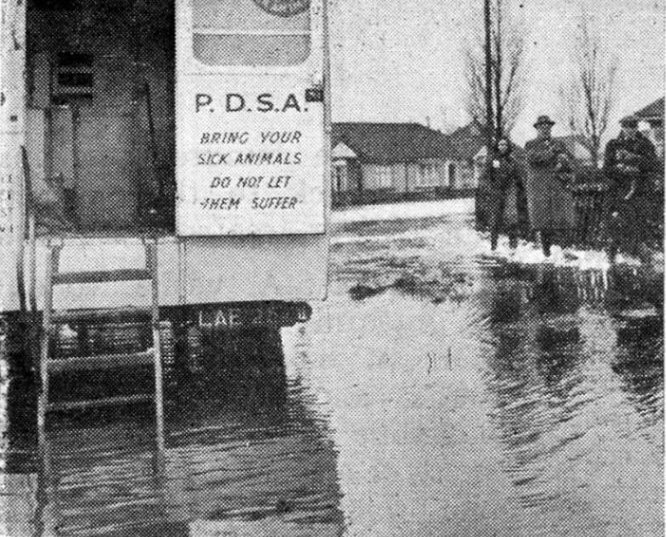 You can imagine how I felt, I was soaking wet up to my waist cold, and a cat struggling to get out because of the water around. When I did get to the Hoy and Helmet pub I saw a P.D.S.A, man who kindly put the cat in the van and said they would take it to Ilford for me. After a hot cup of tea in the hut I got on my bike and drove home. I stopped outside my house but I couldn’t get off….I was nearly frozen stiff so I had to call my wife to help me off my bike. I was carried indoors and stripped off. My skin was all wrinkled and white and they rubbed me with towels to get the circulation going again, and all my mother said was “Is the cat alright?” I told her where he was and my sister said she would get him for her.

We all went to the bungalow later on and cleared up the mess, dried it all out. My mother stayed there again. In fact she was there all through the war but had to come home owing to ill health. We sold the ground but we couldn’t stay away so we moved to Canvey four years ago.

One thing of interest, a friend of mine a Mr Abrams who now lives on Canvey drove a large van belonging to Messrs Achille Serre of Walthamstow to Canvey after the flood and loaded it with soiled linen and took it to the factory where it was washed, ironed and returned to Canvey and all this free of charge.

I hope and pray that this terrible thing will never happen again as this will live in my life forever.