Louisa Le May - she died on her birthday 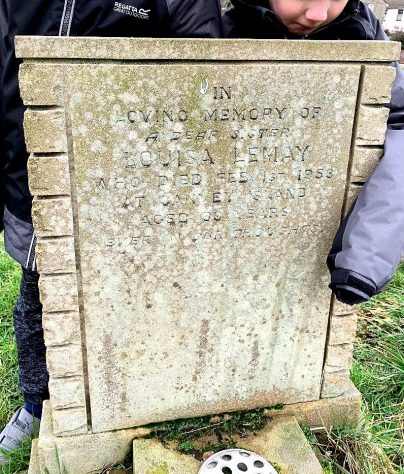 Louisa Alice Le May was one of the victims of the 1953 flood. She is buried in the cemetery at Jotmans Corner, Benfleet and also commemorated on our flood plaque which is just inside the wall of the cemetery.

Louisa was born on the 1st February 1890 and died on the 1st February 1953 her 63rd birthday. She was born in Bethnal Green to Robert and Emma Le May (Lemay). Robert worked in the print at that time. She was one of at least 5 children, Nellie, Arthur, Maud and Florence. She first went to Roman Road School in 1896 followed in 1897 to Somerford Street School and then Gayhurst School in 1901.

The next record we have of Louisa is in the 1911 census where she is working as a servant in the home of Physician Christopher Kempster and his wife Hilda in Amhurst Road, Stoke Newington. In the 1939 register she is living with her younger sister, Maud, in Caversham Road, St Pancras where she was stated as being the Manageress of the LCC Park Refreshment Rooms. Neither sister had married.

Her father Robert and his second wife Emily (his first wife died in 1904) came to Canvey on or about 1929 as they are living at ‘Rocklands’, in  Corona Rd in the Electoral Roll of that year. Robert died in Walthamstow in 1937.

We are not sure of any date that the sisters came to Canvey or if indeed Maud came too but Louisa was here by 1953 and living at her parent’s home ‘Rocklands’, in Corona Road. Her probate record confirms the date of death and that both sisters were spinsters. This was one of the problems we had finding out details of her life.

We are very grateful to Anna Sartory and her boys who came across Louisa’s grave and contacted us to see if we had any information about her for a project the boys were doing. At that time we had little but dug deep for them and from the information we found we have at last produced this page.