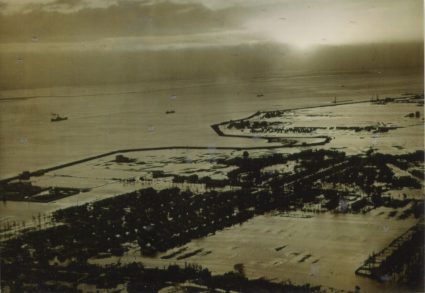 We moved to Canvey from Romford in 1944 because my dad was frightened we’d get bombed out. The story I know — I don’t know whether it’s fiction, I was only 18 months old — is that a bomb was dropped on Collier Row, blew the front door off our house and blew my metal pram straight through the hall and out the back while we were in the bomb shelter.

In January 1953 we lived down Labworth Road. I was 10 years old. I had been to the beach that Saturday, the 31st, and I remember my older brother Derek, who sang in the choir at St. Nicholas, laying out his robes for the next morning after our mum had washed and ironed them.

Toward the end of the evening I was drawing on a pad, because for Christmas I had been given a red pencil case. It was only a plastic-type thing. When I went to bed I stuck it in my slipper and left it in the lounge.

What woke me up in the middle of the night was the front door banging. The force of the water had pushed the front door open. I opened my eyes and I saw my pencil case floating in through the door.

I jumped out of bed, but I soon jumped back in because I went up to my knees in cold water.

My dad came into our room and said, “Quick, get your gear, wrap yourself up in a sheet and we’ll go upstairs.” We used to have lodgers up there, but there were no lodgers at the time.

We went into the front bedroom and I could hear people calling out. Mrs. Moody, who lived across the road and a house down, was calling out for Jack, who lived behind her on Grafton Road. I heard him say, ‘All right, Nan, I’m coming to get you.’ Whether he did or he didn’t, I don’t know.

The next thing I remember was the army lorries coming down the road with soldiers calling out that they would take anyone who wanted to get off the island. I had fallen asleep, and when I woke up my dad was hanging out of the window, telling the soldiers we wanted to leave.

As we were leaving, I looked out of the window at the top of the stairs and saw two policemen in canoes in the cornfield behind the house, on what’s now the King George playing fields. I found out afterward they were checking for looters.

We all went downstairs and paddled through the water, up the hall and through the front door. We were standing on the veranda and the lorries had stopped outside, and a soldier was going to come in. But I remember my dad pushing me and saying, “Go on, you’ll be all right, walk to the gate and they’ll pick you up.”

Like an idiot, I did. I waddled out in freezing cold water up to my waist, at 10 years old with a blanket wrapped around me. The soldier picked me up at the gate and put me in the lorry. I looked out, and what annoyed me was that the soldiers walked through the gate and carried everyone else, even my dad. Muggins here was the only one who had to walk. And it was my older brother who went down with pneumonia. Me? Nothing.

I remember the lorry went very slowly, picking people up until it was full. At the far end of Labworth, the water was only shallow, and it looked like there were millions and millions of worms floating on the top.

Then I remember the lorry going up Furtherwick Road and turning around at the Haystack, and it was dry as a bone. We went all up Long Road, and then halfway up Canvey Road we were transferred into ambulances and the army lorries went back to get other people. The ambulances took us to the Shipwrights Drive school and gave us breakfast. I had no shoes, I was wearing my mum’s fur boots because they were all I could find at the time. In the hall at Shipwrights Drive there were hundreds and hundreds of clothes and shoes, but I thought, I don’t want them, I’ll keep these, even though they were soaking wet.

We took a coach to Romford, got out at Collier Row and walked to my Uncle Charlie and Auntie Clarrie’s house. We stayed there for a week. They took me to school at Clockhouse Lane but I kept running home again. I went into their main hall where they were having assembly and the headmaster said, “We’ve got a celebrity here, from the Canvey floods,’ and they all turned around and looked at me.

We were only there a week because they didn’t have a big enough house for all of us, and my Uncle Albert and Uncle Charlie gave us their beds and were sleeping on the floor even though they had to go to work.

So we went and stayed with my Uncle Wally in Parkside for about three months. Once they were allowed back on the island, my mum and dad went back to the house every day to try and clear it all up.

Lorries came around with big air tubes that were funneled through the window, and all the other windows and doors were shut and they blew hot air in all through the house to try and dry it out. For years afterward, on the outside you could see big patches of white where the salt was coming out of the concrete.

My future in-laws lived down Berkeley Lane, and they told me years later they didn’t have any flooding at first. They didn’t even know until someone came round about breakfast time and told them the island was flooded, and everyone had to get off. It wasn’t until the second tide that they got water in.

A lot of the people didn’t come back. Obviously they were nervous that it could happen again. A lot of my mates down Labworth didn’t come back, and I never saw them again.