You are here: HomenextHistorynextOld PhotographsnextCollectionsnextMike Brown's CollectionnextMy Memories of the Canvey Floods on the 56th Anniversary

My Memories of the Canvey Floods on the 56th Anniversary

I must be one of the very few people who saw all the events of the horrendous night of January 31st 1953. I lived on a houseboat in Small Gains Creek with my Mother, Father and older brother who suffered from Multiple Sclerosis I was 20 years old. 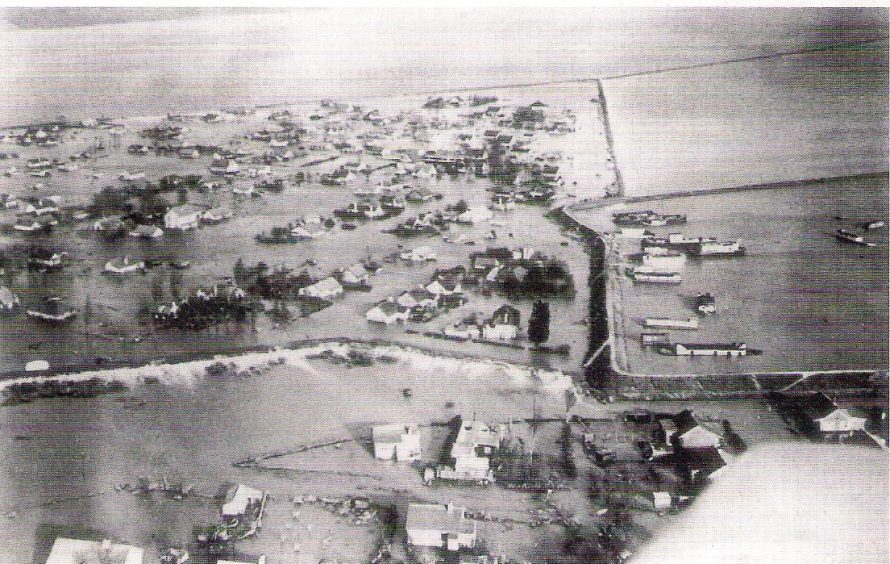 It started in the morning when high tide should have been around midday, that day the tide never even reached our boat before it started to ebb, something that had never ever happened before. There had been two weeks of SW gales but that morning the wind backed to NE gaining in strength, the tide started to flow again around 4pm in the afternoon with over 8 hours to high tide. Having lived on a houseboat all my life I knew this was not normal so we took the precaution of setting out extra mooring ropes, we had a gangway leading to the boat which was always above high tide level, by 9.30 in the evening the tide had covered the gangway with a further two hours to high tide, by midnight the water level had reached the top of the sea wall and from the deck of our boat we could see right across Newlands. It was bitterly cold in the NE wind with clouds scurrying across an almost full moon with the occasional snow flurry.

Soon the cries and screams for help could be heard, because I kept my dingy moored near the sea wall I could not reach it at first, I told my father to stay on the boat mainly because he could not swim, I put on my waders and managed to cross our gangway to my 14ft dingy and pull it over the sea wall. The scene of devastation was unbelievable and the screams and cries for help will be with me forever.

I decided to row to the other side of Newlands as I knew this was where the wall had been breached, I passed the bungalow on the corner of Brandenburg and Nordland road with the man sitting on the roof, a picture that was later on every front page of all the newspapers, he was still alive at that time, he would not get into my dingy he asked me look for his wife. I rowed round and saw a woman who had been caught in a tree the other side of the bungalow, she was obviously dead. I then rowed towards some cries for help and managed to rescue a family of four from the roof of a bungalow in Hornsland Road and take them back to Small Gains sea wall, because our houseboat was still not accessible they were taken in by another houseboat. 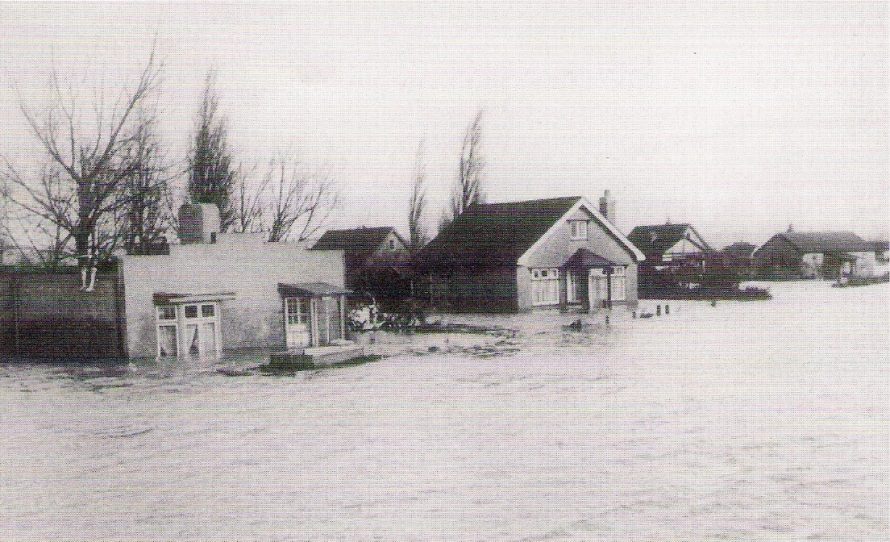 Bungalow on the corner of Brandenburg and Nordland road

I went back again to Newlands another 4 times, I managed to rescue 11 people in total but unfortunately 4 died of exposure. By this time I was completely exhausted my hands where bleeding from rowing, after a hot drink, a change of clothes and dressings on my hands I decided to go once more to pick up the man on the roof but he had died of exposure, I felt guilty that I was not able to persuade him to get into my dingy earlier. All the emotions of that night then hit me, I gave up when dawn broke, all the cries for help had stopped, there was just an eerie silence. All I wanted to do was sleep but found I couldn’t.

The first signs of any outside help were the Leigh cockle boats on the next morning tide, then the army arrived and commandeered my dingy, which I never saw again. The most upsetting thing for me was the body of the woman in her nightdress, that I found caught in a tree, was lying on the sea wall for 2 days with the press and other people walking round her, I found a tarpaulin and covered her up, she was eventually taken to the front of  Chamberlain Stores in the high street with all the other bodies. By late Sunday afternoon there were no living people left to rescue in newlands or sixty acres.

On the third day the police told us we had to leave as the island had been evacuated, I refused because I had a new motorcycle which I stored in a shed belonging to Joe & Amy Wyatt the other side of the sea wall, but they insisted, so we had to go. We stayed with an Aunt & Uncle in Thundersley. It was 3 weeks before I could get to my motorcycle which I had bought 2 weeks before the flood, I managed to push it up to the High Street and get a lift on a Scott’s Coal lorry to Ticket’s in Southend where I had bought it. The salt water had corroded all the aluminium parts and it was a write-off, my insurance covered the cost of a new one. 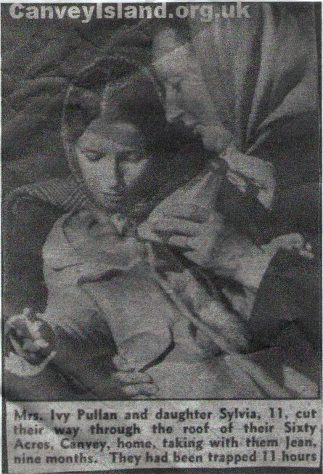 My wife, her Mother and her nine month old sister

My Wife was also a victim of the floods, she was 11 years old at the time and lived in sixty acres. She spent 12 hours on a kitchen table, eventually to be rescued by another uncle and a friend who had carried a boat from The Haystack to Central Wall Path. She has been on many interviews for Radio and TV.

I was called up for National Service in March 1953 and served in Egypt and was involved in The Suez War of 1956 with 3 brigade parachute regiment. I saw some horrendous sights at that time but my memories of the 1953 floods will always be with me.