Recollections of the Flood, 1953

This item was first published in ‘The Bulletin’ in 1983 when Fred McCave ran a series of memories and pictures to commemorate the flood thirty years on. These memories are from the late Leslie Lock. 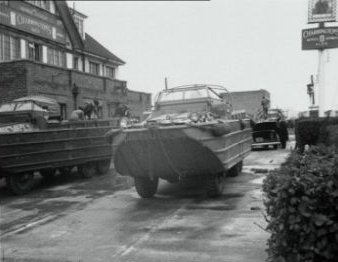 At the time of the flood I was living in a bungalow with my wife and two small children in the Village – about 100 yards from the Red Cow public house-and in Haven Road.

My first recollection is of “Vic” Scott, a coalman, (but a “character” of old Canvey) who lived opposite my home, knocking on my bedroom window and very quietly saying “Don’t worry yet, Les, but the sea wall has been breached and water is coming down Haven Road. Go back to sleep and I will keep in touch.”

He returned later to report that the sea was upon us. Water was all around, but the bungalow which was built very high off the ground, stood clear with the water about one inch below the floor boards. We had an open fire, cooked by a Kitchener and had an Elsan toilet.

We decided to remain in residence and we watched while neighbours were being rowed from their homes to safety. I can remember wading out to collect my chickens which were then turned loose in a glass verandah which was part of the bungalow. The rabbits which had survived the initial surge were raised above the water and the ducks and geese were turned loose.  (They all returned).

I next remember an Army Officer driving up in a DUKW and asking that, as we were at home “would it be possible to allow some of his men to dry out and snatch a few hours’ rest?”

Of course I agreed – and turned my front room into a dormitory for them. The coal fire was kept burning and they slept on the floor:

I left the key in the front door and they came and went, day and night, as they pleased. They were a good lot of chaps. The toilet presented a problem but that was taken care of. Strangely I do not remember the tap water being turned off.

Joan Lock, Les’ wife, who I have known for many years, also told me a very similar story in particular that the soldiers sorted out the toilet. She also added her mother or mother-in-law (I am not sure which) who was living with them refused to leave the island. So things worked out okay for them.