The Army came to stay

Sam Weeden, who has lived in Grasmere Road since he was an infant, was only eight years old at the time of the flood but has vivid memories of the that Sunday morning and sharing the family home with three soldiers who were billeted there. 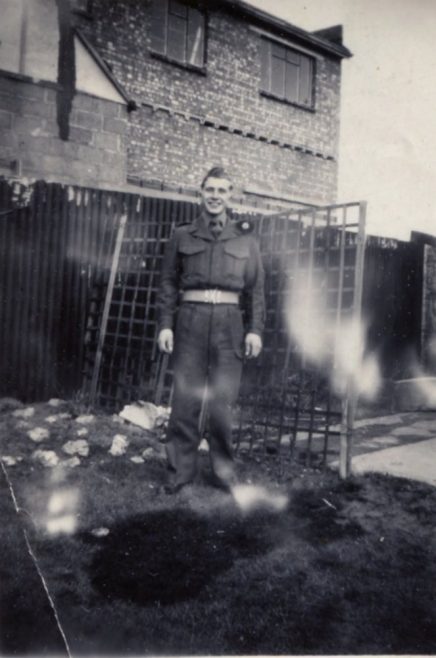 Alma on Canvey after the floods 1953. This picture was taken in the garden at Grasmere Road the building you can see was the old garage.

I had three sisters and in the morning one of my sisters, Eileen, had gone across to the local post office and shop to get the Sunday paper. When she came back she said to my Dad ‘There is a lot of water about, I think there must be a burst pipe as the dykes have filled up.’  Of course, she hadn’t realised what had happened. At that time we could see right across to the sea wall from our back window and my Dad looked out and said ‘Good God, the Island’s flooded’.  I suppose that having lived through the war nothing phased him because I recall so clearly how he then turned to my mother who was preparing a joint of beef and said ‘Quick girl, get that joint in the oven and cooked before the gas goes.’

We were lucky, being on a relatively high spot, the water had stopped at the edge of our garden but I remember we went to the top of our road and saw all the water that was around us.  In particular I recall looking towards the area which is now Link Road and the concrete gully behind it which runs down to the lake.  At that time it was known as New Road and the area behind was a long, low dip as there were no houses there.  People were trying to reach higher ground by crossing this area in small boats, but the current was so strong in this low lying stretch that some of the boats were simply overturned.  I remember that sight so well.

When the Army arrived on the Island we had three soldiers come to stay with us, Alma, Brian and Sam.  They slept in our front room. Sam was the older regular soldier and the other two were doing their national service. 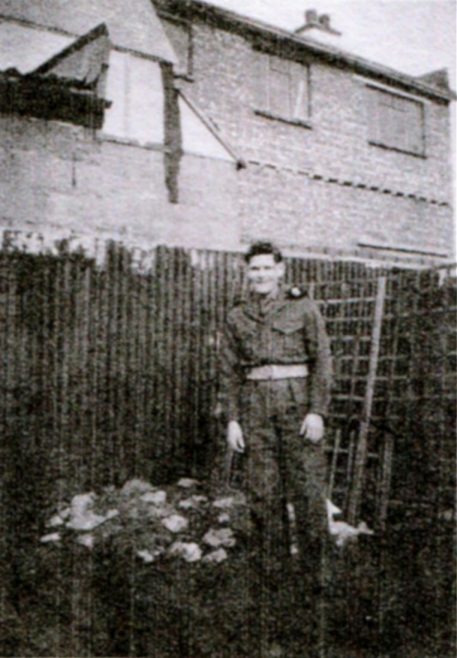 This picture is a little bit grainy. Brian in the garden at Grasmere Road the building behind is the old garage in Long Road.

Their job was to patrol the Island and also check on the state of the sea wall.  They did this in an amphibious ‘Duck’.  They used to take me with them.  As an eight year old you can imagine it was quite an adventure but, of course, occasionally we saw some nasty things.  They tried to hide those sights from me by diverting my attention but nevertheless it was an adventure for a small boy. When not in use the ‘Duck’ was parked across our front garden and the soldiers always said that if anything happened and the water rose again we would be safe.

Of a night time the family and the soldiers used to sit around in the kitchen which had a coal fire and a back boiler to heat water.  When the water used to get hot, the boiler used to make deep rumbling sounds.   Stan simply used to panic.  He would run out and go next door to the old garage in Long Road (now the BP service station) and  go up into the flats above where other soldiers were billeted.  The two younger soldiers would make fun of him.  Yet many years later, by coincidence, I met Stan again through regularly playing darts near Colchester.  Over the course of the weeks I got to know him well and learnt that during the War, on three different occasions, he had been on troop ships that had been torpedoed with dreadful loss of lives.  The sound of of our rumbling boiler just triggered memories of the noise of the ships being hit and he would panic to get up high.   Then I understood the deep rooted fear he suffered and yet the young soldiers took the mickey out of him.

Thinking back to the garage, the electricity was cut off and so the petrol had to be cranked out of the tanks by hand. I recall that even I was collared one day to help pump the petrol up.

A lot of soldiers were billeted in the Red Cow, or King Canute as it is now.  A cafe opposite called the Orange Cafe was owned by Paddy Flyn and I think the Army commandeered his new car as my father was driving it on and ff the Island to bring in supplies for the Army and the locals.

The Army left after a couple of weeks, the soldiers with us were heading off to Korea.  Meantime the Island was trying to recover and there was a scheme where carpets were being donated to replace those damaged by flood water. Our floors were ruined by the soldiers tramping in and out all the time in their boots but because water didn’t get into our house we couldn’t have a new carpet. “

With a grin Stan recalls, “Yes, Mum and Dad were very annoyed about that.” 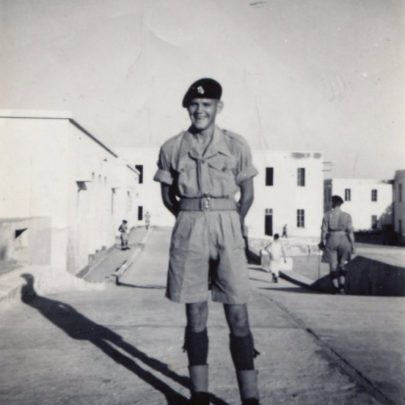 Brian was also on Canvey in 1953.
Stan Weeden 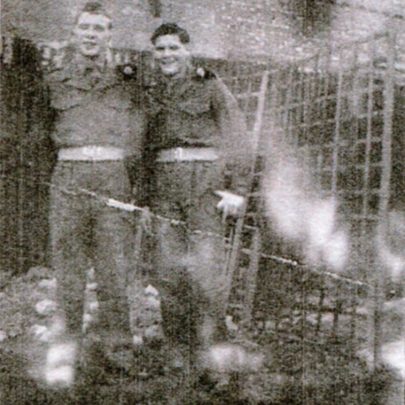 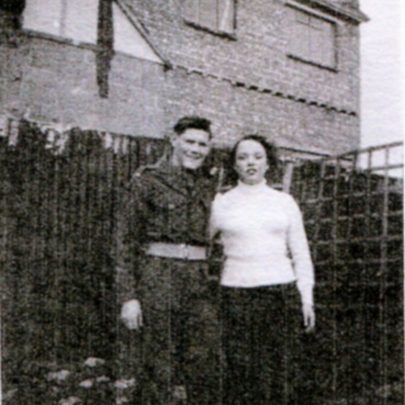 Brian and Eileen (Stan's sister) in the garden at Grasmere Road.
Stan Weeden