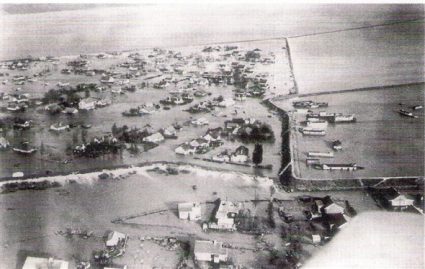 My parents, Harry and Beatrice Nolson, and brother, Peter Nolson, were living on Canvey at the time of the flood. They lived on ‘Vange’ houseboat which was moored in Smallgains creek. My brother would have been about 11 or 12 at the time but I wasn’t born until 1956 so can only recount their stories as told to me by them.

On 31st January 1953 my family had been in Walthamstow at the bedside of my dying grandmother, my mum’s mother, but had returned to Canvey late that evening as the family dog had been left alone at home all day and they felt they needed to get back to him. When my family arrived back on the Island they were obviously aware of the stormy weather and very strong winds whipping up the sea.

I’m not sure at what point during the night they noticed something was wrong but my dad said that the tide was exceptionally high and the boat was tugging at its four mooring chains which were located on each corner of the boat. They became concerned that the boat might either be dragged under the rising water or that the mooring chains would not hold and that the boat would break free and be sept away on the tide so they wrapped up warm and went out onto the sea wall to join other neighbours who had gathered there.

It was bitterly cold so my mum took the dog and descended the land side of sea wall to take shelter in the doorway of one of the nearby empty holiday bungalows. I guess this would have been in Nordland Road or maybe one of the roads that run down to it. After a while she became fed up with standing there on her own so went back up onto the sea wall to join the others at which point they heard a really loud ‘bang’ followed by the sound of rushing water. They realised the noise must have been the sound of the sea wall giving way. Out of the darkness they saw the water coming towards them. Mum said they were terrified. However, more terrifying was the thought that, if she hadn’t decided to go back up on the seawall, my mum would probably have been swept away by the flood waters!

They decided that, under the circumstance, they would be safer back on the houseboat so went back on board. My brother told me that they could hear people calling out for help in the darkness and my dad said he had to try and help them so he and some other men went in search of boats. Apparently they broke into Prout’s yard and took what they needed. He spent the rest of the night doing what he could to rescue people trapped in lofts and on roofs, taking some back to the relative safety of our houseboat where my mum gave them tea and blankets.

My brother said he was scared that, every time my dad went off into the darkness in the little boat, he wouldn’t come back. He said that he just kept watch, waiting for him to return. He also said that at first there were lots of voices calling out for help in the darkness but, as the night wore on, they faded which he knew meant that they had either been rescued or perished. One of my brothers’ friends, Leonard Starling, lost his life along with his mother and my brother said he can remember Leonard’s dad and brother walking along the sea wall towards our house boat, crying, in their soaking wet pyjamas or dressing gowns. According to my brother, some of the dead were taken to one of the nearby empty house boats until more suitable arrangements could be made.

My family were eventually told to evacuate the Island by the army and were taken, firstly to a school in Benfleet until they made arrangement to go and stay with my dad’s uncle who lived in Wickford.

When they returned home a few weeks later the houseboat had been broken into and everything of use had been taken.

My brother said that, to him at that age, the whole thing was a great adventure! It was the first time in his life that he had been allowed to stay up all night! He recalled returning to the Island and seeing the total devastation. He said that the waters had receded leaving so much debris, including dead animals, stuck up in trees.

When I asked my mum how she felt at the time she said that it felt like the end of the world.

By the time I was born we were living in a bungalow in Weel Road and although I never experienced the flood first hand, the stories of it were enough to frighten me as a child. If I woke in the night and it was very windy and I knew it was ‘high tide’ then I worried that the sea wall at the bottom of the road would give way and we would all drown in our beds. I’ve lost count of the amount of times mum had to sit up with me in the night until I considered it safe to go back to bed!