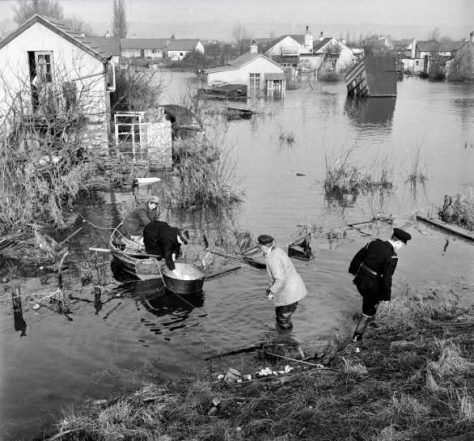 Everything written here is from my memory of what my father, William (Bill) Starling said. He spoke only once about that night and it was not to me, directly, for I was still a child of ten.

We lived in Whernside Avenue. I was two years old at the time. My brother Leonard was 12 and my mother, Violet, 36. In what seem the ‘quaint’ ways of the time she was my father’s ‘housekeeper’ – thus it says on my birth certificate – because he was married to someone else.

At about three or four o’clock in the morning my father was woken by the sound of dripping water. He assumed a pipe had burst in the house and stepped out of bed into freezing sea water nearly to his knees. He woke my mother and they got Leonard up and dad got us onto the roof. He then went back for the old woman who lived next door – presumably Gertrude Williams who was the other death in Whernside Avenue.

And on the roof we stayed through that freezing February night. My father was wearing an old army great coat and to keep me alive put me inside this so I could have his body warmth. That was to be the thing that saved me.

During the time on the roof Mrs Williams became delirious and began to ‘see’ her husband who had been dead for some time. My father had fought in the Great War and was no stranger to death and recognized that she was dying and there was nothing he could do.

Later a small rescue boat came by. I think that by now my mother and brother were probably unconscious or close to it. The craft had room for them but not for my father. He was so cold that he had forgotten that I was still beneath his great coat and thus did not hand me to the rescuers. I survived because he forgot me!

My mother and brother were taken by the craft to a bigger boat, whether a house boat or yacht I have never been sure. Whichever it was, in my father’s words, “tied too tight”. It went over as the water continued to rise. My mother’s neck was broken. I do not know whether Len had died by then or whether that, too, caused his death.

I remember, as a child, once being shown a newspaper which had a photo of my father in a hospital bed, taken as an example of the terrible plight of the survivors. I was told he received several letters from women around the country because of it, and the offer of marriage from a woman in Scotland!

But my father returned, with me, to the wife he had left for my mother. She had known about Len but not me. But, in her mid-fifties, took us both in and raised me as one of her own.