Growing up on Canvey Island 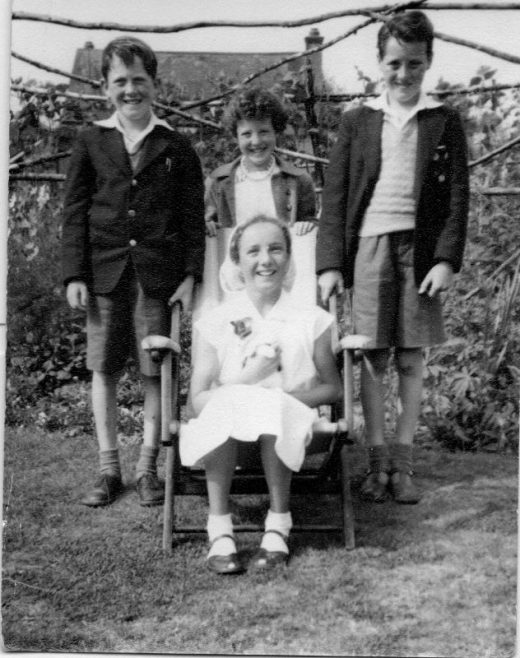 Firstly a little bit about myself and my family. I’m a Canvey girl born and bred, although I should point out that due to the war and the island being in a defence area nobody was allowed in or out unless you lived on the island, so that may be one of the reasons why expectant mums were shipped out to Rochford, Writtle, and Runwell. I was born in Writtle in Mum told me a large house with a beautiful staircase (I have yet to confirm this) and my Aunty Beet Mrs Knapp, loved to tell everyone my cousin John was born in Runwell in a padded cell.

My parents moved to Canvey from Walthamstowe in 1942 having been bombed out at least three times. Mum found a bungalow to rent in the Avenue No 2 (later to change into 16) and our Landlord was Mr F. Fisk who collected the rent every Monday wash day. (I can see myself hiding behind my mums Piny when he came round). My family brother Frank age 9 and Jimmy 8 together with Aunty Beet and cousin John aged 6 weeks in. Both husbands being in the Army. Later Aunty Beet was to find a place in Meynell Avenue near Mr and Mrs Bishop snr.

My dad was invalided out of the army due to ill health. He told me many years later he had been in every London Hospital when he was a boy and they could not find out what ailed him. He was born in 1904. That’s where he learnt all the card tricks and games from the old soldiers from the earlier wars. Anyway he was put on special duty at Waterlows the bank note printers and gold reserves. He said they checked your turn-ups on your trousers before you clocked off (all very hush hush).

My brothers enjoyed their freedom from parental control – adults being busy with war work and such, and used to roam the area knocking down the odd wall in some deserted damaged house. Watching the dog fights overhead and the American plane that crashed off the point. I was told Jack Fenwick and friends actually went out to the crash site and brought ashore souvenirs which were promptly confiscated by the local bobby. Frank decided one day to find out what the drain covers in the garden were for, not putting the one covering the cesspit back properly and -you guessed it- Jimmy fell in. After he was hauled out he had his first COLD BATH. No immersions then, water had to be heated up in the copper (which was also your washing tub). We only had hot running water winter time when we had a fire and the back boiler heated up the water. So, you can imagine bath night was hard work, to and fro with buckets of hot water.

I didn’t arrive until December 1943 and was kept in the Morrison shelter in the back bedroom when anything was going on. My earliest memories are lining up at Tremain’s in Furtherwick Road (now a 68 Pizza place) with my coupons for some sweets usually dolly mixtures. Also, queuing next door in Chambers (now Costcutters) for mums shopping: tea, sugar etc. all collected by lots of ladies for you (no self-service then).

I had good friends opposite – Sheila Saul at no 21, Pam and Lielia Hollingberry  at no. 23 and Betty Brown at no 25. We had a lovely childhood. Mrs Brown had this enormous box of dressing up clothes and we would spend hours clonking up and down in our high heeled shoes. Later we would be riding our bikes over to the Paddocks where there were swings, the horse, though it looked more like a dragon to me, and the umbrella which you could stand on the rails and rock making it clang, very satisfying. The Fair also used to be there when the carnival was on. One particular day we decided to ride to the Paddocks and I was on Sheila’s small bike with no brakes. Now to get there we would have to cross on the two plank bridge between Chambers and the Rio (now Cisca House area) well the small wheel went between the gap and I went head first into the black oozy mud. I got out covered in black mud you could not see my face. Sheila who was younger screamed “Marries lost her head” we all ran back home leaving the bikes, with Shelia still screaming. I on the other hand had a – Yes – COLD BATH!

My friends and I joined the girls Life Brigade 2nd Canvev with Mrs Cass and daughter Flavia. There was plenty to do and we would meet in the old school house before it was burnt down, and, later in the re-built hall which I’m sure was some sort of pressed cardboard it looked like it anyway. We would practice singing, vaulting the horse and gymnastics for our annual display in the Casino Ballroom. We would thread lovely red braid into our plimsoles, it was all great fun.

Here I must mention the floods of 1953 I know Mr Hollingberry banged on our door calling out ‘the walls gone’. Well Mum Dad and Myself got up the boys who by this time were doing their National Service. Mum put the kettle on, as you would, I went to the front door and saw Mrs Hollingberry and the girls running out. “Come down to Aunty Micks” she called. So I put on my best shoes and socks and went out to follow them not mentioning this to Mum and Dad. Well as I reached the verge I could see this great wall of water rushing down the road ! I managed to hang onto the telegraph pole otherwise I might have got swept away. Then I managed to get to Aunty Micks (Mrs Boyce) holding onto the fences. Mrs Boyce’s house was a chalet so she had an upstairs. Then suitably wet (my shoes never recovered)! stripped off my wet things and went upstairs with the girls. Later Mum and Dad followed they never told me off for disappearing. There were lots of other residents up their so the night was spent talking and drinking tea. When morning came Dad carried me back home, the water was about 2 ft 6 inches deep. We packed up some clothes and food and made our way to the Haystack and were put on a bus which eventually took us to a Rayleigh school, I think Fitzwymark, as King John was already full. We waited for what seem hours when a lady called Miss Martin came and took us into her house. She was so kind, and I spent much of the time going through her button box looking at all the interesting items. We cleaned and cooked for her and generally made ourselves useful. Dad went back to make sure the house was ok and he also had to go back to work. My brothers had compassionate leave and motorcycled down from Blackpool to try and find us. Communication so easy today was a nightmare then. When you think a phone call could have saved so many lives. The boys eventually found us and Aunty Beets family. They said they felt bad watching the Army boys working on the wall while they were driving around looking for us. Later we were given a lovely apple tree from the Canadians which still resides in our garden today.

I went on holiday (my first away from home) with Captain Cass and the troop to the Isle of Wight. Well you had to do your chores and mine that day was to get up early and do the sandwiches for the picnic “Right you butter the edges of the bread Marian” well I don’t know if I was just following instructions or just silly but I left the middle plain. “What are you doing butter the middle!! I felt very foolish but did notice she was smiling. We had a great time visiting places, swimming, rambling and generally enjoying ourselves. We also had to look after the smaller girls , who, were quite a handful sometimes. I had never been away before as Dad always said we live in a holiday place what more could you ask for? Indeed the summers always seemed endless. It must have seemed heaven for him always working in the city and now a night worker at the Daily Mirror. I had not thought perhaps we could not afford to go away. Mum did not go to work because she looked after us all and the house and all the things mums do. In fact she had a bad heart as she caught scarlet fever when she was 9 and in those days it was a serious illness. She spent many months in hospital and in fact lost her Mother and baby brother to the illness.

We often had visitors to stay in the summer. My Ginger cousins would stay for two weeks with uncle George and Aunt Flo. They were very fair skinned and would burn up terribly you could peel off their skin in sheets! Thank goodness for factor 50 now. One time a Mrs Goldburg came down and asked if her son-in-law could stay for a week. He was a fighter pilot in the war and had been seriously burned he was one of the now famous “Piggies”. He spent the whole week in the garden relaxing. I wish I could have thanked him for what he had done for us all but I was too shy. Another chap used to stay on Fielders camp in a big bell tent for the summer and we used to store it for him in the winter in the Garage. One year he brought down a second hand bicycle for me and Franky Saul taught me to ride it, I was thrilled. 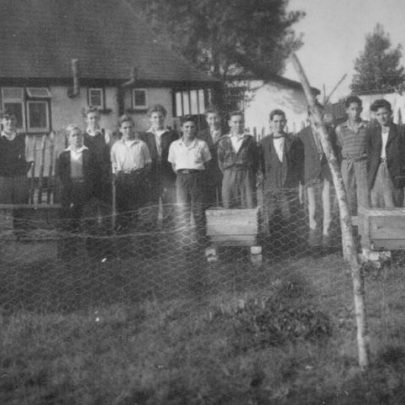 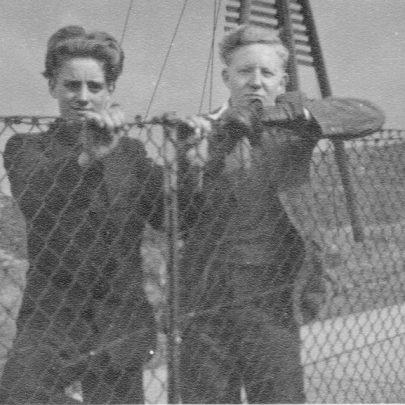 17 Nagger Frost, Ray Walsh in front of the 'Lady of Canvey'
Marian Patten 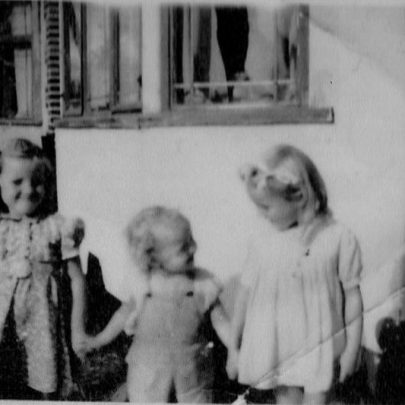 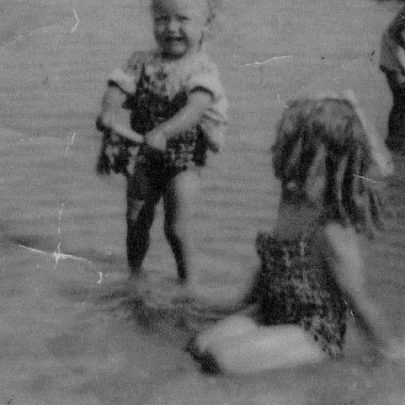 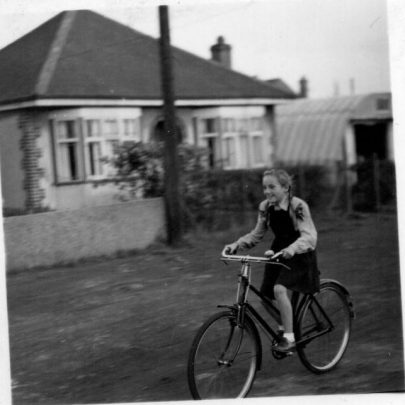 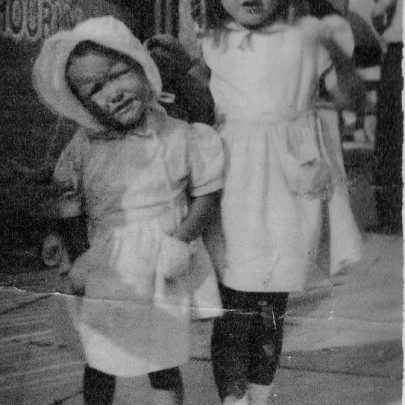 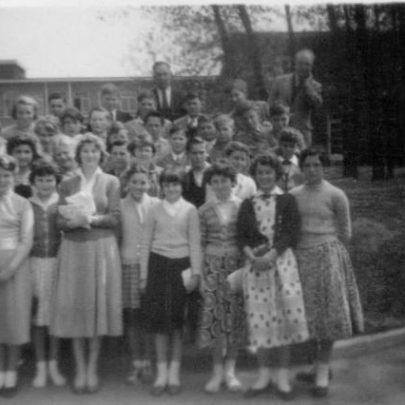 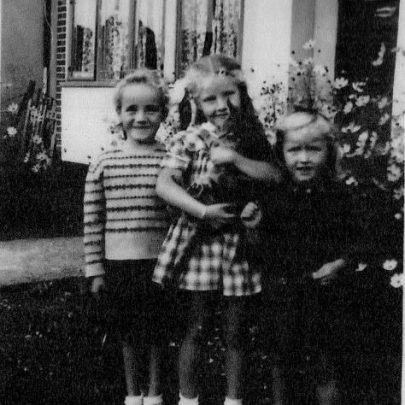 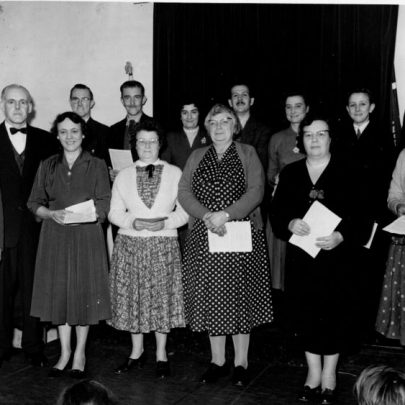 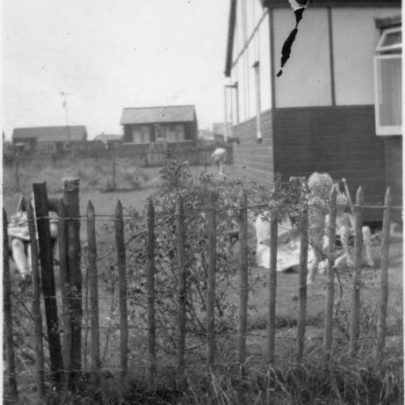 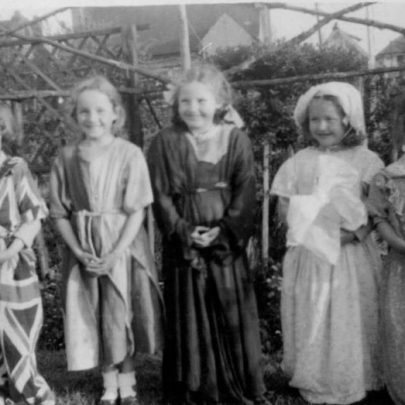 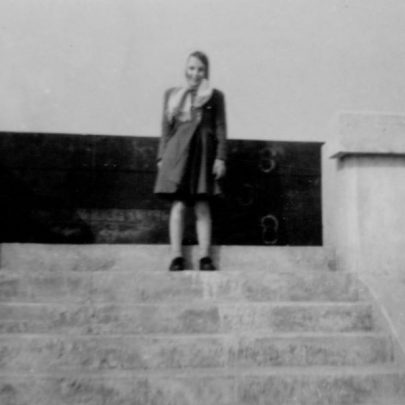 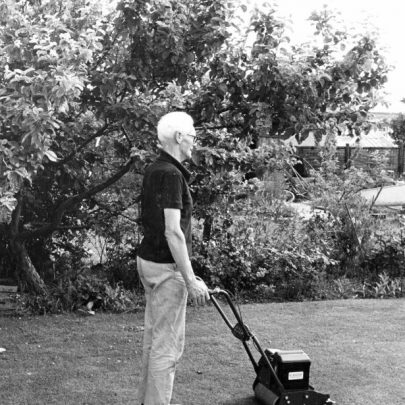 62 Dad and the apple tree donated by the Canadians after 1953 flood.
Marian Patten