A shopping basket full of memories of Leigh Beck (part 2) 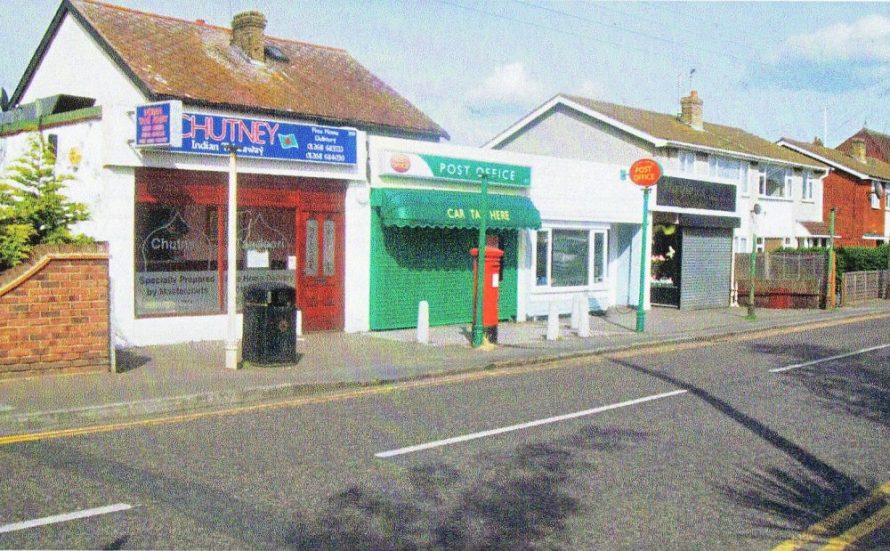 The Parade of shops today

The two parades of shops at Leigh Beck were divided by what was known to us as the ‘Sideway’. This gave vehicular access to the yard of the ‘Old Bakery’ and also the big asbestos garage where Grandpa Stevens kept his Wolseley Car. It was wide enough for ‘Cranfields of Ipswich’ flour lorries to back down to the flour store door on the side of the building. Because it was just a clinker track it was often rutted and needed continual maintenance. When the ‘NewBakery’ was built in 1976 it just provided access for the accommodation at the rear of the Post Office. Eventually, when the whole site was re-developed in 2001, it became, in order to obtain planning consent, the right of way from the High Street to Wynterswyk Avenue and is now maintained as a narrow alleyway by Castle Point Council. 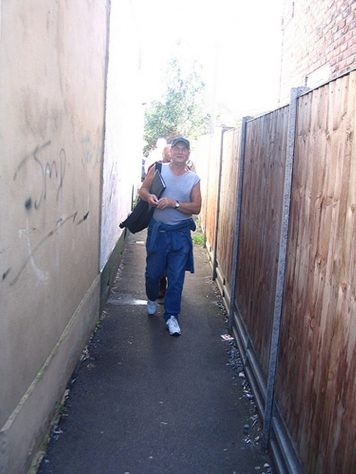 Before referring in any detail to the shops, in what we call ‘The Post Office Parade’ its worth looking at the building that is attached to the rear of the parade. This is certainly a survivor from the post Hester pre WW1 development of what was the burgeoning resort of Canvey-on-Sea as can be seen on this site it appears on early 1920’s photo postcards of the area.

I was intrigued by Maureen Buckmasters’ story and photos, (on Dave Bullock’s original www.canveyisland.org.uk site) telling of its use as a home and cafe by her cousin Eileen’s family, the Clarkes. This was the first time I’d heard the name ‘Ebor House’ which fascinated me because I’d never heard any reference to this name through our family. ‘Ebor’ has connections with the area around York (Eboracum was the Roman name for the City) but it could be, as Maureen says, connected to Ebor in West Africa where her uncle worked for sometime, or ‘Ebor Terrace’ in Leeds where he once lived. It appears that at sometime in the 30’s the cafe evolved into ‘Clarke’s Stores’, possibly before the addition of the parade of four shops. This radically altered the lay-out of the property with a full height extension to ‘EborHouse’ which then became semi detached accommodation, each with an upstairs bathroom, downstairs kitchenette and internal access to the two middle shops. 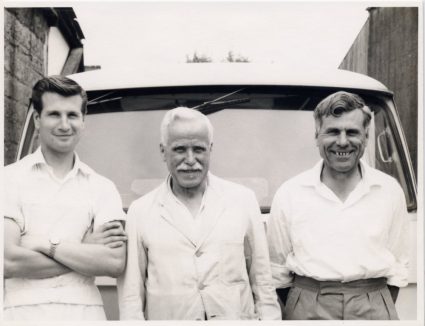 Graham, Aubrey and Granpa Stevens in front of Commer van parked in the ”Sideway”

In our memories the two shops nearest the ‘Bakery Parade’ were ‘Elkingtons’. The right hand shop (now PO) was a grocery Store run by Mrs Elkington (Doris) and through a gap in the wall the other shop (now the Indian take-away) sold rolls of linoleum and carpets and other hardware items and was run by Mr Elkington. Both Mr and Mrs Elkington were Conservative Councillors on the old C.I.U.D.C at sometime. They also kept several very ferocious Alsatian dogs behind the high fence in their yard which used to bark and snarl at us as we loaded up the bakery van.

As related in my previous saga, in the early 60’s ‘Elkingtons’ became the PO and when Granpa Stevens died Rosa Webb became the Sub Postmistress, she also lived in the accommodation. Several of the ladies already mentioned carried on working at the Post Office with Rosa. In the mid. 80’s when Rosa retired, Norma Blainey (who had been Chief-Counter clerk for some years) bought the PO with her husband Terry, Janet Widling (nee Tynan) and Aileen Bishop (nee Ochterloney) worked for them. In the 90’s Norma sold to Richard who is the popular Post-master today. 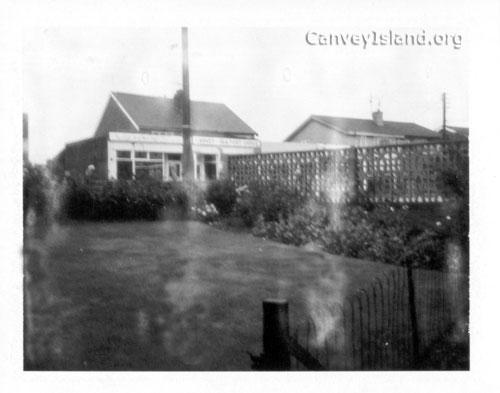 Partial view of the Parade in the 70’s. The Woolshop is very clear

The other half of ‘Elkingtons’ was separated off and let out when Granpa Stevens bought the premises. This was the first shop in the parade and it was a Dry Cleaning Agency and Wool Shop owned by a lady called Olive Taylor. Then in the 70’s by Sandra Day and then by Iris Mason and her sister Beryl. Somewhere along the line the dry cleaning agency disappeared and the emphasis was on Wool and Baby Clothes. Kay Hearn bought the business in the later 90’s and sold Ladies Clothes there. After that finished the shop stood empty for a while and then became the Indian Takeaway.

The shop next along from the PO was the Butchers which as we recall was owned by Harry Wright and his wife. We can’t remember anybody before them and they must have run it right until they retired in the 60’s and sold it to Tony Barlow. Tony we believe was there until the mid 70’s when he sold out to Billy Wright. (no relation to Harry) We think that after Billy Wright packed up the shop was empty for a couple of years before it was converted into ‘Shapes & Curls Hairdressing Salon’ by Sue and Stan Slater, which has now been in business there for over 25 years.

The catalyst which got us started on this project was Jenny’s childhood memory of when she used to go on errands to the Greengrocers and George Collins used to ask her in a gruff voice “What’s your name, little girl?” and she had to answer “Jen-eee-fer” which was a catchphrase from a comedy radio show of the time, with think it was Jimmy Edwards. Anyway our earliest memories of the Greengrocers were when it was run by the Collins family. George Collins was, like our dad, Aubrey, a keen pigeon racer and we remember his sons, Ernie and Dick and their wives working there. After the Collins there were numerous owners, Mary Dallas had it for some time, so did a combination of Nash’s and my wife Sandra’s Nan, Lil Spires, in the late 60’s (in fact, apparently Sandra was almost born in the shop in February 1967) Billy Wright ran it when he had the Butchers next door. Sorry, we are a bit vague about the 80’s but we can remember Grant and his parents who called the business ‘Strawberry Fayre’ and that Mr Petley (who used to own the grocery store on the corner of Yamburg Road) came out of retirement and helped out. Steve Slater then had the shop for about 10 years and he called it ‘Fruits and Roots’. It is now a florist.
In the 50’s the land between the parade shops and ‘The Admiral Jellicoe’ was occupied by the large detached house of Alfred Wainwright,Master Builder. He played an important role in the early development of Canvey; he built Miss James’ Girls Bungalow, The Baptist Church and additions to Coxs Hotel and Marlborough House. He must have been a major player in building separate properties (not estates like Fisk and Fielder) over five decades.
I remember him sitting outside the double-fronted house, dressed in the Edwardian garb still favoured by elderly men in the 1950’s. He was a large man with a walrus moustache, wore a bowler hat with a rumpled three piece suit and large watch and chain across his stomach. I also recall he had a granddaughter who lived at the house, her name was Valerie Childs and she was at Leigh Beck School.

The house remained standing until the mid 60’s when the land was built over with terraced houses on the High Street and Wynterswyck Avenue by Mickey Saunders.

The Admiral Jellicoe
As children we obviously only remember the exterior of the pub and that it hasn’t changed much over the years. I do recall that the landlady for many years was Mrs Jennings and she had a son called Christopher who went to a private school called Westminster College. As kids we used to look through the windows of the hall at the ballroom dancing lessons conducted by a rather strange looking character who wore an open-necked white shirt, lightweight trousers at half-mast, no socks and white plimsolls.

More about the Jellicoe can be read here.

More can be seen about the shops here 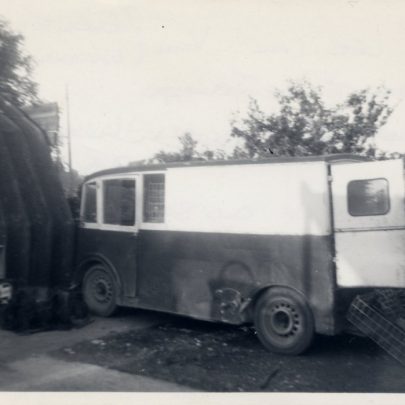 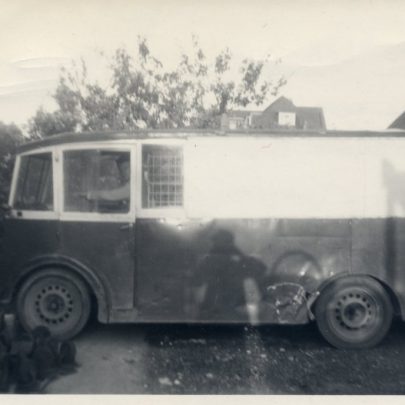 The 'Lee Car' van. This picture shows the top of Jellicoe and Wainwrights house visible behind
G Stevens 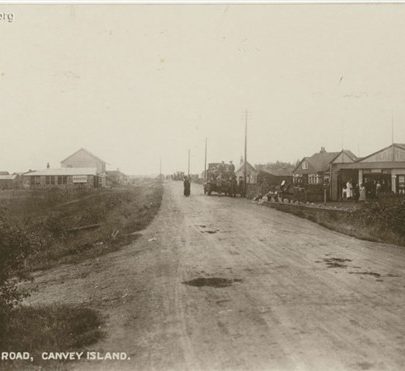 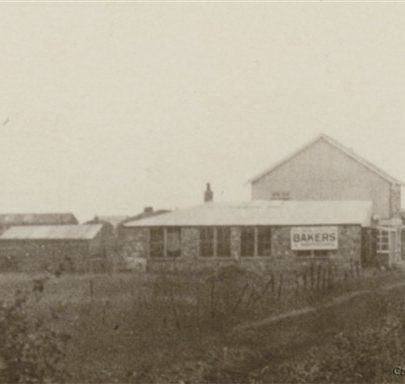 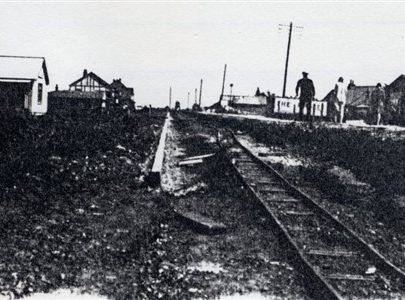