I asked Bill about starting his life back on Canvey after his Army Service in WW2. In his words this is the story of his life from that point in time: 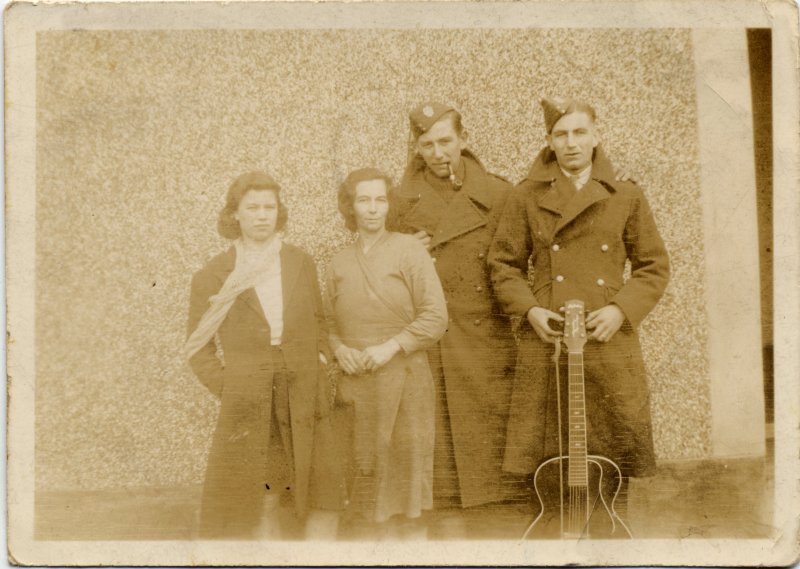 Left to right-Sister Peggy, my mum, Stanley and myself

“It was very difficult getting back into ‘Civvy Street’ after the war, when I was in the army I lived under an authority that looked after my welfare; food, clothing, housing etc. In fact although I was trying to look after my country, my country was looking after me! Once out you were on your own.

For a few years I got a job as a taxi driver working from Benfleet Station, but it really wasn’t me. I’d been doing it for about five years and one day I saw this old taxi driver went over to his telephone with a sort of staggered walk and I thought ‘If I don’t watch it, I’m going to end up like that!’ I immediately went into the office and gave my notice in. So I had no job. 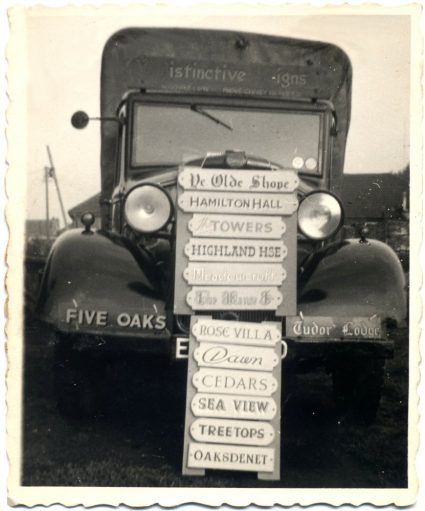 Our Sign Van. My father ‘Doll Doll’ did all these name tablets

I spoke to my dad, also called Bill Gower, he was a sign-writer on Canvey and he said ‘Well you don’t know the job but it’ll take time to learn,’ and it did. He taught me and my brother how to form the letters and the history of lettering and all the different types of text.

Now by sheer luck, I applied for a loan of £200 to Wilson’s Loan Trust in London and I had to go to the Guildhall and go before the Lord Mayor and several other dignitaries and they questioned me most severely, why I wanted this loan. The Lord Mayor said ‘This is a lot of money for a few brushes!’ I said I wanted the money to improve my father’s business and the special brushes were made from sable and we needed other equipment, ladders, trestles etc. They approved the loan which I had to pay back at £4 per month, interest free. 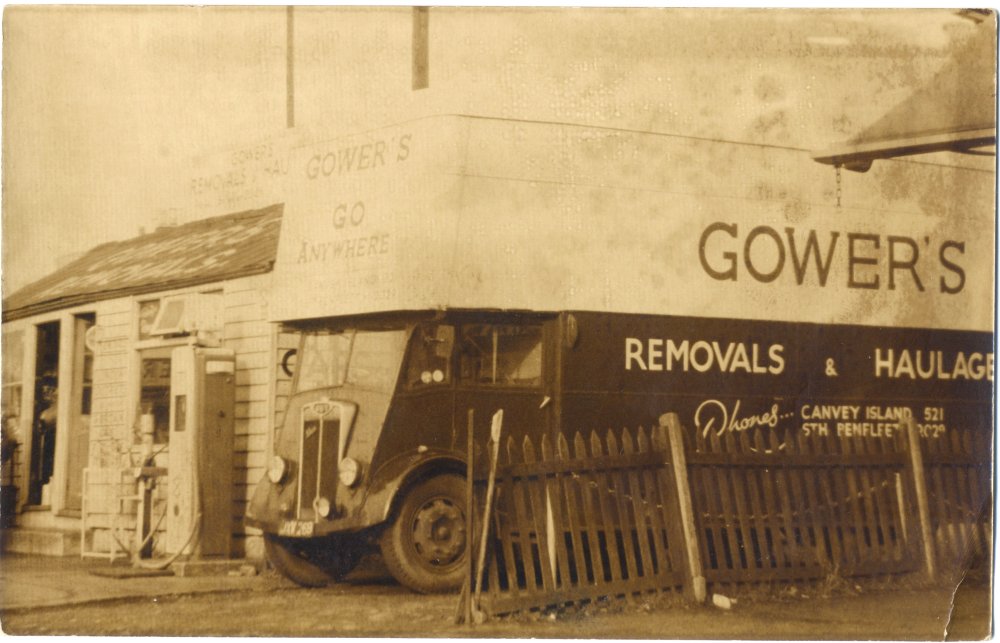 It was a tremendous bit of luck, because while I had that money, my father had a job to do for Fred Yorwarth, who had the tobacconist shop on the corner of Oxford Road. It was a shield sign for John Player and Son cigarettes and it had to have Yorwarth’s name written in and be put up.

We had to send the bill (it was 15/-) to a man called Jackson who was staying at the Southend Hotel. I said to my dad, ‘Ask him if they’ve got anymore work’ but he said ‘This is a great big firm, it’s just a one off job!’ I said ‘Dad it’s only words, put it in!’ Shortly after that I got a phone call from this chap and we got the contract for all their work in the Southend area.

From then on we kept expanding and I was able to buy brand new vehicles and by the latter part of the 50’s I’d acquired enough finance to buy another business. This was Claxtons Removals based by Benfleet Station which was not doing a lot at that time. For a time I ran the two businesses but eventually I put the emphasis on Gowers Removals and in the 60’s and 70’s had a fleet of up to five large removal vans going all over the UK and onto the continent”
_____________________________

Bill’s dad ‘Old Bill Gower’ carried on as a local sign-writer (in his own write) for many years and was a familiar sight on the Island on his bike with his brushes etc. ‘Young Bill Gower’ actually gave up driving big lorries at the age of 74 but still kept the business going driving a small van until the age of 80. Bill’s three sons all worked for Gowers Transport from the 60s to the 80s.

Bill also told me that all original members of Dr Feelgood had at sometime done a stint for the firm. (His son Rod was a roadie for the band) Interestingly, when talking about his friendship with George White (A friend from his Taxi days) and the Fenwick Family, Bill recalls that he delivered at least three of Mr John Fenwick’s superbly crafted model villages to seaside resorts: Blackgang Chine, Vetnor, IOW, Clacton and one other resort on the Sussex coast.

Once again, thanks to Bill for giving us the opportunity to look back with him over some of Canvey’s past. 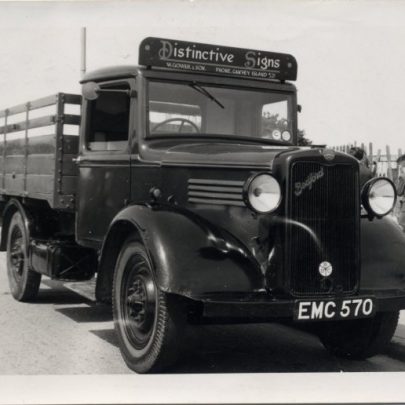 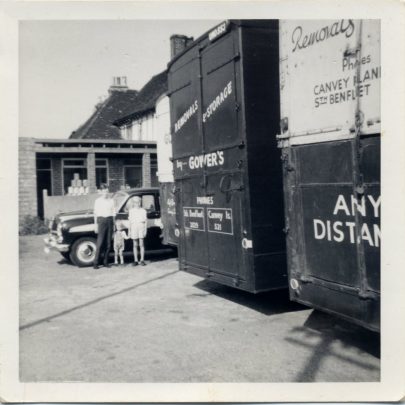 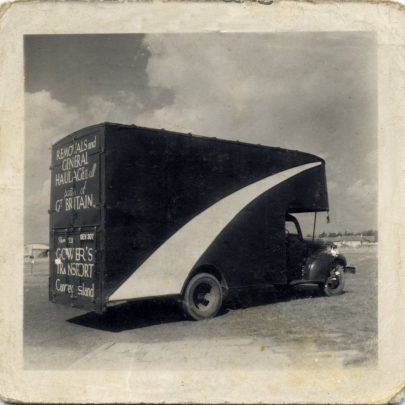 This was my very first Removal Van'Chevrolet' Ex Army modified. Bought it from Claxton's with the 'A' Licence
Bill Gower 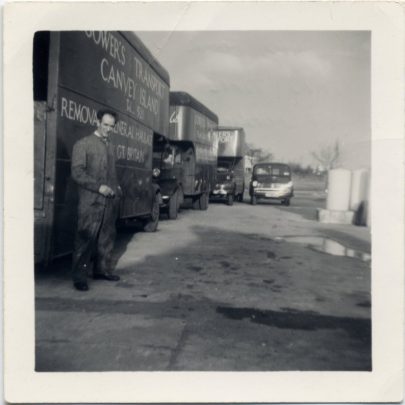 I had four vans by this time. Lined up at Marine Garage.
Bill Gower 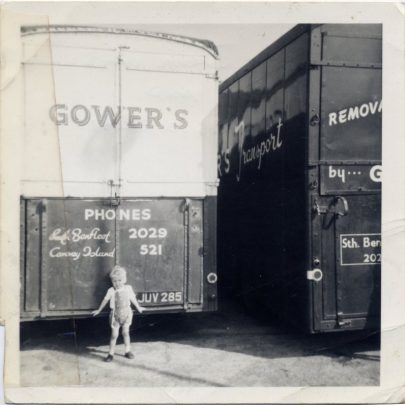 Change of removal vans. Benfleet Yard. I think this is Brian.
Bill Gower 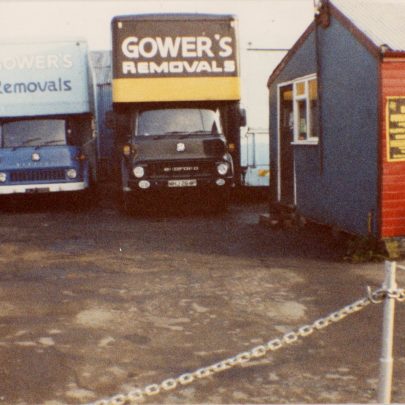 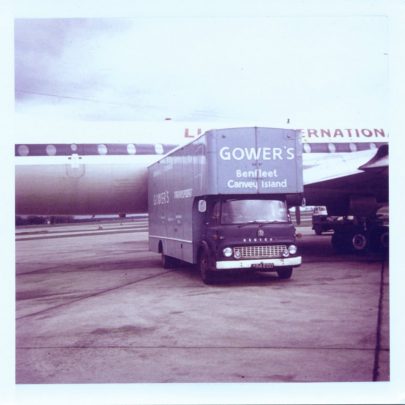 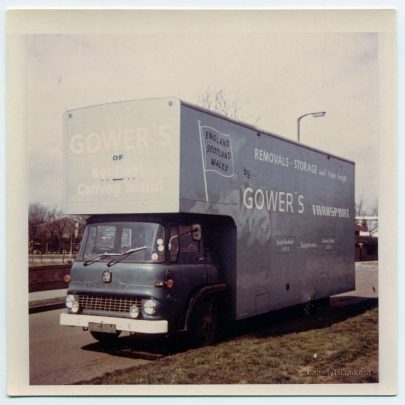