Conversation on a Summer Afternoon, 2010 (finis)

At one point in our conversation Dudley disappeared and came back after a couple of minutes later with something in his hand. This made me chuckle, it was an old leather suitcase handle. I said ”I recognise that.” and he said “Your Grandad gave my father three of these. ” My Grandpa, ‘Ollie’ was in the leather trade before he permanently moved his family to Canvey in 1920 and started the bakery business with Mr Palmer. We believe he must have at least three wooden tea chests full of these suitcase handles with him from Eastbourne. They were kicking around until the 1970s, I remember them being in the asbestos garage at the back of the ‘old bakery’.—— The premises and shop on the corner of May Ave today.

Although not the right kind of handle this certainly opened a door which gave an insight onto the community life of the growing township that Canvey was becoming during those pre-war and wartime years. Dudley recalled that his Dad (the plumber) would go down to the Bakery and make bread doughs when Grandpa Stevens was short of staff. Possibly at this time ‘Hasty’ George was also my Grandfather’s landlord because when the bakery firm had a shop in Hartfields’ Parade the bomb that dropped in Oxford Rd blew out all the shop-fronts consequently as Mr George’s shop on the corner of May Ave was empty, Stevens the Bakers made it a branch shop which remained there until after the Floods. So with the shop on the corner, the plumber had pulled out and the baker moved in, not selling pies full of plums in those austere times but the ‘National Loaf’ and probably ‘Nelson Cake'(a.k.a ‘shonky). 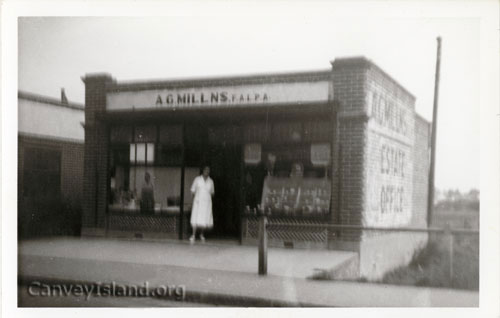 Dudley also has memories of his own participation in bread deliveries. He told me that he and another (whose name he cannot recall) used to pull a cart of full of bread and cakes from the Bakery at Leigh Beck dropping off stuff to Mrs Smallwood at the May Ave shop then on to the Furtherwick shop (still there, it’s an Indian Restaurant now, on the corner of Foksville (at present one-way) Rd. 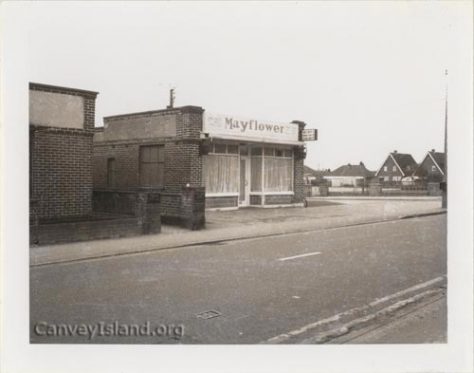 The Furtherwick shop was for many years 60s/70s/80s/ 90s the Mayflower Chinese take-away. It still exists as an Indian restaurant.

I’m sure that the contraption that Dudley used to pull was still around in the 50s being used for door to door deliveries. It was basically a large box with shafts somehow attached to a car axle (it did at least have inflatable tyres!).

Dudley’s father, Harry (Hasty) George,(apparently his nickname was acquired through his initials H.T. but this could ocassionally be changed to ‘HIGH-TENSION’) was certainly a bit of a character, one of his specialities was testing for electricity by poking his finger into light-bulb sockets. Some stories about him were apparently apocryphal, one I’d heard was that he used to ride his bike with his head poking through the rungs of the wooden ladder he carried but Dud told me this was not true, he used to carry the ladder on his shoulder but occasionally might have ended up with his head poking through the rungs. However Dud told me a true story about his Dad transporting equipment on his bicycle. ”He used to carry lead piping wrapped bandolier- fashion around his body. One day he was stopped by a policeman (who definitely  must have been new on the Island) and questioned about his possession of the lead. Given an explanation, the copper was still not satisfied and said my Dad would have to accompany him to the Police Station. Dad replied, whilst unwrapping the lead from his body” “O.K, I’ll go with you as long as you carry this down there.” Copper and lead were not alloyed as the officer soon changed his tune.”