A Dynasty Of Oggs

Canvey history reflected in the families of Ogg and Pound

In the beginning there was David Ogg, a marine engineer born at Leith, Scotland in 1855, though family tradition says North Berwick. His must have been an eventful life, he had been shipwrecked three times before he settled in London to run a public house at Mile End, the Marquis of Cornwallis. In 1901 the address was 337 Old Ford Road, Poplar/Bow. His wife was Ada M.J., 32 years of age to his 46 years. They had married in the third quarter of 1898 and their son David was only a year old. With them at the Marquis of Cornwallis on Census night 1901 were Emma Hayward, barmaid (32), Margaret Borman (21), Jane Woughhman (22) and Sarah Smith, a 16-year-old housemaid. 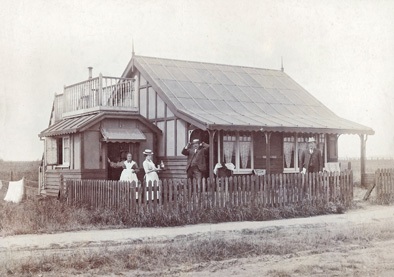 The Ogg family at their bungalow called ‘Canvey Lodge’, in Station Road, on a seemingly empty Canvey in Hester’s time. The covered wagon might have been a kitchen, or even a shop?

This was the time of Champagne Trips, free train rides and free meals on outings to potential plotland sites and for smog-bound Londoners an escape to the ozone-enhanced new watering place by the Thames, christened Canvey-on-Sea.

We’ve seen the posters and advertisements offering plots for as little as £5. As a publican, the entrepreneurial David Ogg (let’s call him 1) would accept plotland receipts to clear bad debts, encouraging him to dabble in the up-and-coming industry himself and ending up with several dwellings on the island. One was the early holiday cottage of the Ogg family, the curious ‘Canvey Lodge‘ in Station Road. This would seem to show a wagon (or carriage) with a house added – or vice versa – supporting a balcony/verandah in an otherwise unpopulated frontiers’ environment. The stuff of pioneers. In one picture the portly David Ogg (1) can be seen with binoculars, being served by a maid and surveying the wide empty prairie, sorry, landscape beyond… (By association it would seem to be of a similar date to the picture of Hester’s travelling bench and therefore has to belong to the first few years of the 20th century.) 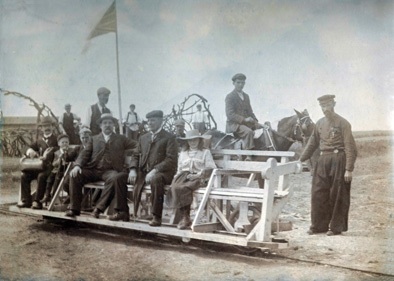 David Ogg (1), London publican in the straw boater, sitting under the flag on Hester’s travelling bench, that must be a fair-weather companion of Hester’s covered wagon monorail.

The picture’s companion is a unique photograph of Hester’s single rail, horse operated travelling bench. Horse and rider supply both the engine and the balance (in the background beside the conveyance) and a ‘Dutch’ operator is in attendance. David Ogg (1) in straw hat sits left of centre in the picture. Frederick Hester played up the Dutch connection with the island to the full, as reflected in the souvenirs on sale in the Winter Gardens.

Pictures from the family albums and souvenirs were kindly loaned by Joan Ogg. When I mentioned that Canvey-born Graham Stevens remembered a Canvey plumber by that surname, her answer was: “Oh, that was my husband, David Charles Ogg (3).” Their son makes up the fourth generation as David William Ogg (4) and her grandson is the fifth.
(All family pictures courtesy of Joan Ogg.) 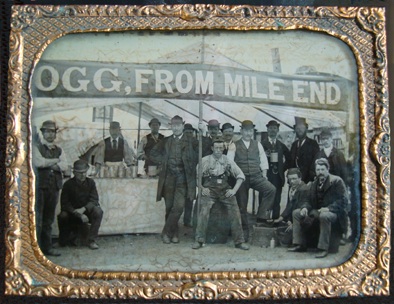 Obviously 'Ogg from Mile End' knew a business opportunity when he saw one. Setting up his tent on Canvey, making his London public with their free rides and charabancs feel at home... It would seem that the entrepreneur might be the only one having removed his hat for the occasion, seated far right? (The original is actually a framed glass slide.) 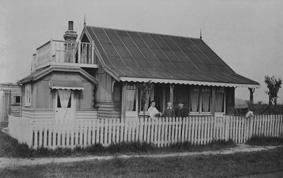 'Canvey Lodge', Station Road, Canvey. Ada and David Ogg with their son David (2). There is an outhouse now, or a privy? And houses are now visible in the background. Could Cox's Emporium be the one on the far right? 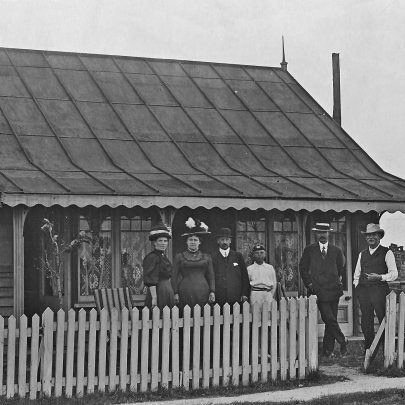 Great grandma and great granddad (1) and friends photographed at 'Canvey Lodge' in the early 1920s. The boy in white (2) became Joan's father-in-law. 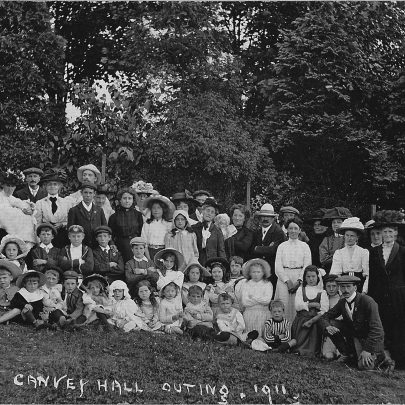 The postcard says 'Canvey Hall Outing, 1911'. Would that be the Methodist Hall? Joan's future father-in-law, David Ogg (2) in school cap and blazer, seated in the second row, fourth from left. 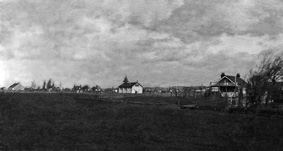 St Anne's church, quite probably photographed from the back of Ogg premises. 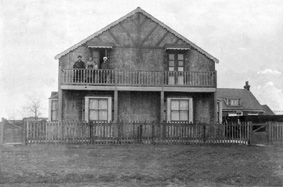 Another Ogg property, here seen from the back, was the brick-built 'Stanley Villa' in Gafzelle Drive, Leigh Beck, which has survived to this day. (One half was 'Stanley Villa', the other half was 'Gordon Villa'.) 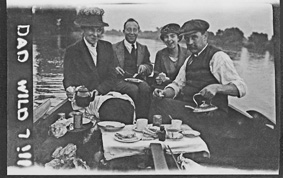 The Pound family at a picnic on the Thames, Alice and Charles Pound with daughter Alice and a friend. (The very likely home-processed film negative seems to have been tampered with and the film negative mark 'A' and the 'IL' for Ilford have been turned into the words 'DAD' and 'WILD'.) 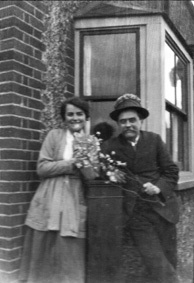 Alice and her father Charles Pound (Joan's husband's granddad) in a playful holiday mood at Gafzelle Drive, with flowers about his hat... 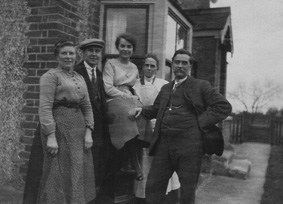 A family portrait at Stanley Villa in Gafzelle Drive, Leigh Beck. From left, Ada Ogg, her son David (2) and Alice, his wife, with her mother (also Alice) and father Charles Pound. That corner of the house in Gafzelle Drive features in many of the family photos. 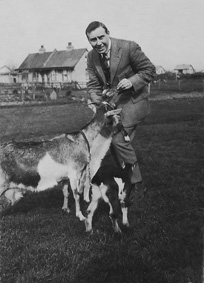 The boy grown up - Joan's father-in-law David Ogg (2) in a typical plotland setting. 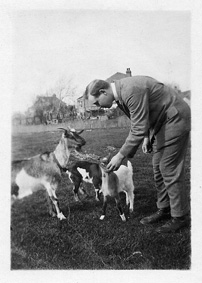 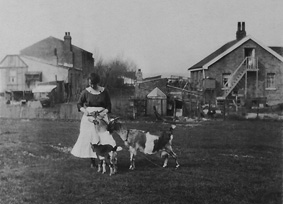 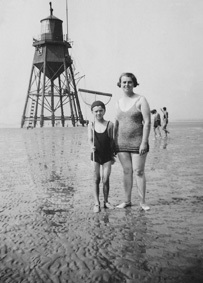 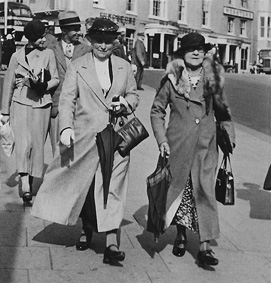 Ada Ogg and friend Mrs Harper who lived in Southend, two dowagers to be reckoned with. (By the fashionable couple behind them, could that be the 'roaring 20s'?) 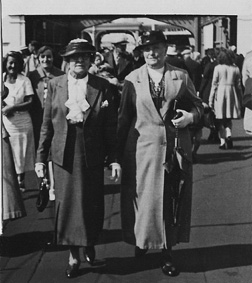 Mrs Harper and Ada Ogg at the entrance to Southend Pier. (The fashions have changed, but not the two ladies.) 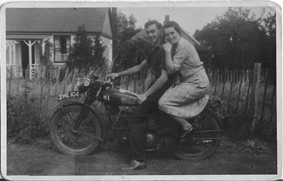 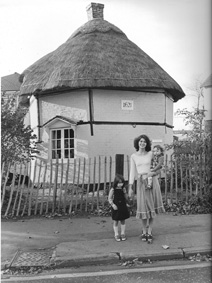 A photo of 1957, when Kathleen Ogg, with daughters Natasha and Natalie were staying at the old Dutch cottage of 1621 while their house was being built. 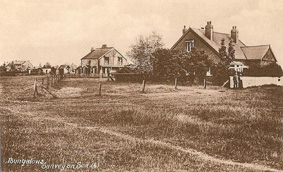 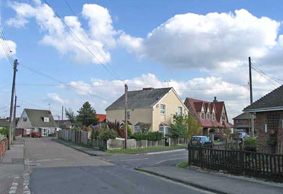 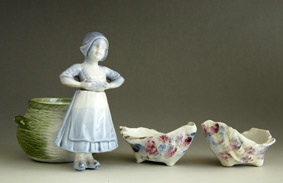 The shaking lady! A tangible connection to Hester's Winter Gardens, a souvenir in his beloved 'Dutch' style, as well as a pair of shells, very likely meant as ashtrays. It must be rare for such objects to survive their time on mantelpieces. Originally the young lady used to wiggle sideways from the hip, though one of the little points of balance has been lost.
Courtesy of the Ogg family. Photo Tessa Church.