From a magazine article dated 1969

Basil Cracknell’s article on Canvey Island in our July issue prompted Mr H. Stephens of West Ham to send us some interesting recollections from his early life on Canvey Island 50 years ago. One of these is his first smoke, of Special Nut Brown, in the forepeak of Captain Voss’s Tillicum, a converted Indian dugout canoe in which the intrepid Voss sailed round the world arriving at Margate on September 2,1903. Mr Stephens tells us that the Tillicum lay derelict in Smallgains Creek for many years. 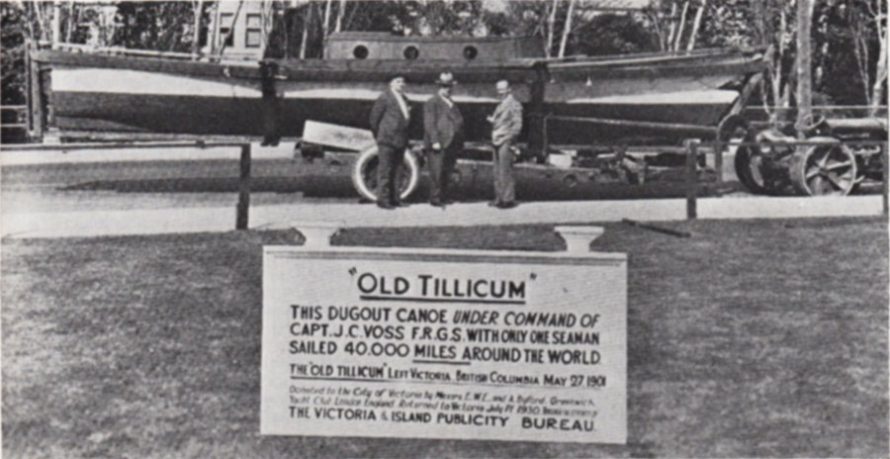 Taken over 30 years ago, this picture shows Old Tillicum at rest in a park in Victoria, British Columbia

The Tillicum was presented to the City of Victoria, British Columbia, by Messrs A. W. E. and A. Byford of the Greenwich Yacht Club and returned to Victoria on July 1, 1930 by the efforts of the Victoria & Island Publicity Bureau.

When the Tillicum arrived at Margate the reply to “Where are you from?” came back from Voss, “Victoria, British Columbia”. To the next query, “How long on voyage?” there was a more startling answer, “Three years, three months and twelve days”. Captain Voss carried out his amazing voyage long before the days of publicity stunts, radio-telephone or any other of the aids which nowadays are regarded as essential equipment for an ocean navigator. If he had disappeared, no-one would have known and probably few would have cared, for there was no such thing as instant global communication in those days.

The Tillicum was made from a single red cedar log. Captain Voss bought her, decked her over, fitted a cockpit, rigged three small masts with fore and aft sails, named her Tillicum (an Indian name meaning friend), took with him one companion who had never been to sea before in his life and sailed her round the world – probably the most remarkable craft ever to make the circumnavigation.

When Voss headed his craft out into the Pacific, his crewman saw his first ocean greybeard and was so scared that he promptly took off for the top of one of the little masts, nearly capsizing the tiny craft. But by the time they had reached Samoa the man had had enough and jumped ship-taking along the Tillicum’s only compass, a fact that Voss did not discover until he was 600 miles out on his way to Sydney.

His adventures and experiences on his voyage which finally brought him to England were hair-raising but he survived everything. When the canoe was shipped (free of charge by Furness Withy Line) the PLA also waived dues and charges. The remarkable craft came to rest in front of Crystal Gardens in Victoria.

So one will understand Mr Stephens’ boyish thrill as he sat in the craft’s forepeak, even though, as he records, his first smoke made him more than seasick.

Of Canvey Island, he says he remembers when the mainland was only reached by ferry or, when the tide was out, by stepping stones. He went to school by farm cart. The old school was destroyed by fire some time after the last war.

Lunch was 1d or 2d worth of bread and dripping from a small shop in the village. “You do not seem to get dripping like it now,” says Mr Stephens. He had to walk home when school was over but occasionally he and his companions stole lifts on the back axles of carriages bringing people from Benfleet. Household water was supplied by rain­water which had to be boiled. “It was not unknown for your tanks to be raided during the night.”
“In summer with the saltings bright with sea lavender and other wild flowers the ditches filled with tall, swaying feathery reeds. That, together with some marvellous sunsets, made the place not quite so deso­late as your picture.”

Mr Stephens also recalls the oft-told tale of the sailing barge skipper navigating in the shallow waters of the creeks. Thames barges, it used to be said, could sail anywhere if there had been a heavy dew. On this occasion, the skipper found another answer to the old problem of whether there was enough water to float his craft. “Be they ducks walking or swimming?” he asked his boy. “They be swimming, master,” was the reply. So the skipper knew he could carry on sailing!

Sent in by Buzz Bullock