It must have been the summer of 1948 that we first came to stay on the Island. Dad had sold his little bungalow somewhere to the south of what is now the “Five Bells” roundabout. We were being taken to show his new acquisition. I can remember the journey from Wanstead Park Station to Benfleet only vaguely. Arriving at the station we stood on the platform as Dad sorted out who was to carry what of the stuff we were brining down to start stoking up our new holiday home. Above the platform rose a couple of trees full of a very noisy crowd of rooks.
“Know how to tell if it’s a crow or rook, boy ?”
That was Dad. Always feeding me titbits of knowledge.
“A crow in a crowd is a rook, but a rook on its own is a crow ! What are they up there ?”
“Rooks ?”
A pat on the head then I was given a bag to carry. Once off the platform, there was the terror of crossing over the railway lines. What if a train came roaring along ? Would it see us ? We walked down where cars now pick up or drop off commuters or school children down to the bus station, where buses now turn round. There were big corrugated iron clad buildings then the gravelled surface of the bus station. 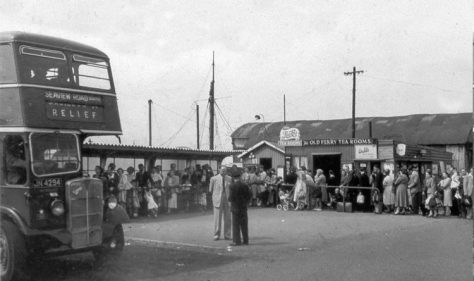 Waiting for a bus to Canvey.

Luckily there were no boats coming along the creek but Dad pointed out the join in the road where the bridge opened up if there was. We crammed ourselves into the seats on the green double decker. I was used to green buses from the days of travelling from Pitsea Station to the Five Bells before walking to our bungalow.
Over the creek and onto the island, our bus grumbled along a very long road between open fields, eventually coming to a very sharp bend. I nearly fell of my seat as we turned the corner. Then we were in a group of houses and a pub with big red cow on its sign. More open fields with the odd house amongst them and we were in the main high street. I can remember being very disappointed that the Haystack was just a building and not a proper haystack. 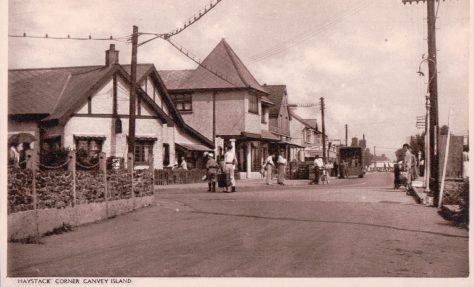 When the conductor called out “Lakeside, mate. Your stop !” we all piled off. No lake ! What a cheat this place was turning out to be. Once Dad had got his bearings we trundled along behind him up a sort of road. Cinder paths on either side of a broad lane of hardened ruts with the odd puddle. Little houses along the way had garden full of the most glorious assortment of flowers and bushes, butterflies and bees everywhere, hunting for the dinner.

As we walked, up ahead I could see a low bank of grass. Dad said our place was just over the top of that but all I could see where rooftops. Then the most amazing thing, cows ! Huge creatures that plodded along the top of the bank, tails flicking, heads bobbing, complaining loudly from time to time. I was rooted to the spot. Never seen cows for real until then. Huge, frightening creatures. I couldn’t move until they had passed but Dad was patient and waited.

I had no idea what they were but I found one the hard way. Yuk ! Much shouting by Mum but I survived the ordeal. Getting to the mound was tricky. It was just a little mound. It run along for a long way either side of the end of the road. To get to it we had to step, or in my case jump over a small stream then clamber up a dusty slope to the top. Wow ! I could see for miles ! Little houses, more flowers, a lot more rutted roads and the noise and smell of chickens. Dad kept chickens at home, so I knew the smell too well.

And there was our new “chalet” as Dad called it. Looking back even then I wasn’t impressed. Two little huts built from grey blocks with sloping iron roofs. A little shed, the “dunny” Dad called it. Chemical toilets again. We had that in our other bungalow. But the garden was huge with the huts at the back end with a big hedge of some sort behind it.

My first job was to get water. Once Dad had opened up, we were enveloped by that almost ever present damp smell – wet canvass. He found a jug then took me over the road to the stack pipe. Not like our last place. That was just a tap on a pipe sticking out of the ground. This one had its own house. Brick built with a concrete roof, little metal front door with its own key hole. I chipped the enamel jug getting it in and struggled to carry it back. More shouting from Mum.

And that began eight happy years of holidays on the Island. If it hadn’t been for the flood, Dad was going to build or help build a bungalow, so he said. We might have move here. As it was it was 2002 before I returned to live here.

What stays in my memory from those days? The sound of rooks, scalding the world. It meant we had arrived for the six weeks holidays. And skylarks. Lying in the pile of cut grass in the garden trying to spot them High in the always blue skies of childhood. Cows. Our dog coming back from his unattended morning stroll covered in dung. He loved rolling in it. Oil lamps. I found three in our garage and am busy trying to clean, paint and install solar lamps to hang in the garden. The taste of the water back then. Tea never tasted better. Believe it or not, I never found the lake until we started house hunting her in 2001. Happy days !