and the Great Flood 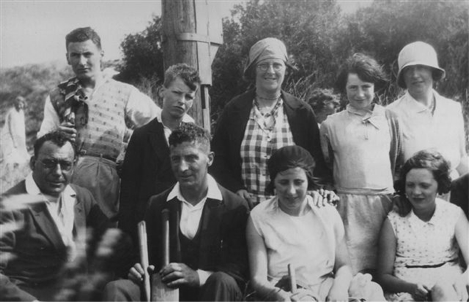 These are the memories of my mother, Wendy Jonas (née Tiquet), who spent childhood holidays with many family members on Canvey Island, and remembers them as very happy times. She was born in Bow, East London, in 1920, and now lives in Essex, where she is still going strong at the age of 95.

Wendy’s mother was Martha (‘Mabel’) Flight, and the Flight family congregated each summer with their children on Canvey Island, in the period before WW2, and for some time after. One of Mabel’s brothers and his wife drowned in the 1953 flood, and another has written a short memoir of his experience during that night on 31 January.

Hanson and his wife Lottie moved to Stanley Road, Canvey Island after his retirement. The area was called Sunken Marsh. Hanson had previously owned a tool shop in Barking Road, Plaistow, east London, where he sold and repaired saws. They lived at the back of the shop with their six children.

Both Hanson and Lottie drowned in the east coast flooding that hit Canvey Island on January 31, 1953. At some point, Hanson had converted to Islam because a great friend of his (believed to have been a sailor) was a Muslim. His wish to be buried according to Muslim rites caused a rift between his children apparently, and in the end, Hanson and Lottie were buried with Christian rites in Benfleet church (Jotmans Cemetery).

Tom and May Flight

Tom and May also moved to Stanley Street, Canvey Island, in a bungalow next door to Hanson and Lottie. It’s not known how Tom earned a living in Bow, where he was brought up.  He was sent out to work in a toy factory in east London at the age of 12, in 1890. He became a Sunday School teacher at Bow Church, now located on an island between lanes of traffic on the Bow Road. An Anglican priest apparently helped him receive a good education, and attain his General Certificate.

When the flood hit Canvey in 1953, Tom was aged 70. Tom and May were able to survive by climbing onto the roof via the stairs outside their bungalow.  They shivered all night (it was January), while listening to the calls of others screaming for help. By 10.30 the next morning, the army and mud-covered police came by boat to rescue them from the roof. They had saved nothing except the clothes they stood up in, and their dentures. He later wrote that he saw “several poor devils almost naked, and men crying like children, their nerves all gone”.

Tom and May were unable to return home for five weeks, and moved back to London temporarily. They stayed with Tom’s sister Mabel in Wanstead, and other Flight relatives living in Ilford.

Tom Flight’s account of the flood is included in “The Great Tide”, by Hilda Grieve, published by Essex County Council.  He said that on their return to Canvey Island, residents were given emergency furniture by the British Red Cross, and later, funds by the Lord Mayor.  They also received food parcels and other household items from ordinary people, both in Britain and abroad.

They moved to Canvey from Wanstead, London Borough of Redbridge. Flo’s husband Arthur built their house himself. They named it Homecot.  Their two children (Phyllis and Gwen) went to the local school, and Arthur went to work in London, taking the train from Benfleet to Fenchurch Street Station every day.

Another brother, Rowl, bought a prefabricated steel Nissen Hut after WW2. He lived there with his wife Gwen.  Rowl had worked as an overseer for the GPO (General Post Office as it was then) in London. In 1917, he had been captured and made a POW during WW1.  He suffered shell shock for the rest of his life.

Mabel (née Flight) and her husband Stanley Tiquet bought a plot of land on Canvey Island, and had a holiday bungalow built across a dyke from Flo’s family. They named it Wendene, after their eldest daughter Wendy. They were living in Wanstead (now in the London Borough of Redbridge) and Mabel and the children would spend long summers together with the rest of the Flight family.  Stanley continued his work in London, coming down for weekends.   The bungalow was sold at some point before WW2, when Mabel, Stanley and family apparently decided to holiday elsewhere (in small hotels in the Devon and Dorset area).