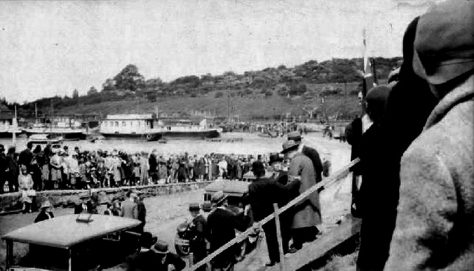 Officiated over by Brigidier Colvin the first pile was driven in the ground for the new bridge. Opened in 1931 and named the Colvin Bridge

Canvey Island really was an island and there was no bridge joining it to the mainland. We spent our childhood years there so we remember.

There was only the main road stretching across the island, so to get to the narrowest part of the water a creek, the residents would have to either [be] jogged along in a pony and trap, a horse drawn carriage if you like started up by an enterprising lady resident or the little single decker blue bus also ran by a resident of those days (1927).

On arriving at the creek if the tide was in we would board a small row boat, Ferry boat, we called it although it could only take 12 people at a time the charge was 1 ½ old pence per person sometimes the boatman would have to make several trips. Anyway on reaching the other side, the mainland which was called Benfleet one could board a train to London or the other direction to Southend.

However if you arrived at the creek from the Canvey bus and found the tide was out then we could walk across the much worn stepping stones that were placed in the mud bed of the creek many years before our time.

There was no Hospital on the island so you can imagine the problems that arose in an emergency. A patient needing immediate transport to the nearest Southend hospital well the unfortunate patient would have to be rowed across the creek in the ferry and with a bit of luck there would be an ambulance waiting on the other side to rush them to the hospital. You can imagine this took a great deal of time and effort on the part of the doctors and the local police and the boatman especially if it occurred in the night.

There was also the fact that all the supplies of food and other goods needed to stock the shops on the island had to be taken over by vans and lorries of course if the tide was in well they would be kept waiting the Benfleet side held up for as long as 3 hours until they could strike across needless to say there were some who ventured to cross before the water was shallow enough and we’ve seen them being towed out with tow ropes and another lorry or even 2 or 3 strong farm horses.

I remember the once a week visit to Southend. All the large stores were there also cinemas, so after shopping a visit to the cinema and teas out we’d make our way back to the ferry boat at Benfleet. My parents used to say the row across the creek always blew the cobwebs away.

Well eventually the much needed bridge was built it was the Colvin swing bridge. Alderman John Burrows JP with his entourage from Canvey Chamber of Trade led the way over. Parties went on all over the island, school children had the day off and lined the side walk crowds of visitors and residents queued together wanting to be first to cross that day in 1931.

Since then we have said what a blessing we had the bridge during the war. 1939-1945. But most of all again in 1953 the time of the bog flood that damaged so much of England’s East Coast.

However would we have coped without the bridge to get off the island so quickly when the seawalls collapsed and Canvey was flooded it would have been devastating. As it was it allowed ambulances, military vehicles and all other help to get over to us to evacuate so many people and animals.

Now in 1990 there is another bridge and road to the east of the old bridge and my husband and I no longer live there. When we go back to visit relatives that live there still well we marvel at the improvements made there over the years and say to ourselves “However did we cope when there was NO bridge to Canvey.