I remember when it was all fields!! 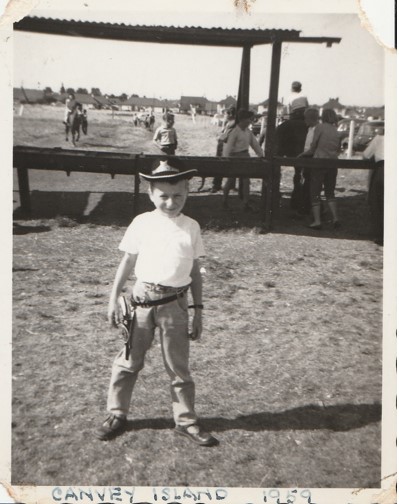 My family came from Tottenham but our links with Canvey go back before the war when my Aunt Flo (Dad’s sister) and Aunt Alice (Mum’s sister) moved to Canvey.  Aunt Flo lived at 77 The Driveway and reckoned her husband put the first bridge over the dyke to Kitkatts and Aunt Alice’s backed on to hers from Welbeck.  My sister was evacuated to stay with Aunt Flo in the war and my father reckoned that when he visited he could see the doodlebugs coming in.  As a four year old I remember getting excited that my cousins might come to stay because of the flood in ’53 (they never did) unaware of the tragedy it meant for others on the island.

All my childhood holidays were on Canvey, alternating between Aunt Flo and Aunt Alice except for one year when my Dad must have been a bit flush and we went to Thorney Bay.

What an adventure! To South Tottenham by bus, then train to South Benfleet, change at Barking, and then that final leg by bus to Kitkatts, sometimes with the added attraction of having to wait for the bridge to close.  All the way I’d be humming “Bali Hi” from South Pacific (Here am I, your special island).

Of course the Casino and the Peerless Playdium featured big in the holidays, especially as Aunt Flo worked in a change kiosk in the Casino and would slip me a few extras.  Aunt Flo was also good friends with Mum and Pop Pugh who lived in a caravan out the back of the Casino.  Pop used to have a business making arcade machines but in semi retirement he used to look after the machines in the Casino.  I must confess, some of my favourites were next door as I loved the old automatons.  So sad those machines seem lost now, I see even a basic Allwin goes for a small fortune now.

When I was about 14 we moved to Canvey, 83 Hawkesbury Road, as it had always been my Dad’s ambition to get there.  Career wise, I peaked early as when I left school I pestered Mick, the Casino’s foreman, daily until he gave me a job on the dodgems and, though I only worked there full time for one summer, I kept going back and worked weekends and evenings for some years after, eventually graduating to the Speedway.  The Casino still features large in my memories, (along with The Speakeasy Emporium, my friend John’s bungalow of ill repute in my hippy days!)  and when I listen to sixties records, especially A Whiter Shade of Pale, I am back there, leaning up against the transformer on the dodgems, rolling a cigarette.  And the smells all come back, the hot dogs, the candy floss and that strange musty smell of wood in the Cresta Run and the Ghost Train and the like.  And Maggy is still there on the flying corks.  Happy days!

When I moved away from Canvey I still went back fairly regular, until one day on an extended lunch break I rode down there on my motorbike and was heartbroken to see the Casino gone.  I rarely went back after that, no longer having family on the island, and in 1999 I moved to Cornwall and have only been back once since, though I did manage a drink with my old friend the late Lenny the Hat.  I’d love to come again, but it’s a long way for an old geezer from Newquay and it’s changed so much I probably wouldn’t recognise it.  Back in my day there were hardly two houses the same and most of the roads were unmade.  Strewth, I remember when this was all fields!